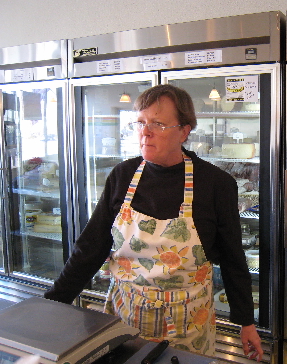 “People who know nothing about cheeses reel away from Camembert, Roquefort, and Stilton
because the plebeian proboscis is not equipped to differentiate between the sordid and the sublime.”
– Harvey Day

I don’t know whether or not Mr. Day intended his quote as a condescending affront toward those lacking appreciation for some of the world’s most fetid fromage, but the truth is, not everyone really “gets it” when it comes to stinky cheeses. There’s absolutely nothing wrong with that.

That’s because there really is a cheese for everyone. It’s one of the world’s most versatile and beloved foods and it has been since the very first cheese was made somewhere in the Middle East around 6000 B.C.

Its versatility ranges from overwhelming (to some) to subtle. In taste, it can range from bland to sharp, from buttery and rich to light and delicate and from pleasantly astringent, even mild, to powerful and assertive.

The texture of cheese can range from the softness of melting butter (such as a fine Burrata) to a crumbly firmness that makes it literally flake off in pieces when you cut or bite into it (think Leicester cheese). The aroma of some cheeses can clear a room and turn the stomach, but other cheeses have a pleasing, aromatic bouquet. Still other cheeses have virtually no discernable aroma.

Cheese should be served during special and formal occasions and it’s almost always served with the most American foods of all–sandwiches and burgers. Cheese can be served as a family snack or as the crowning finale to a great gourmet meal. It is nourishing, soul-warming comfort food at its best.

Cheese serves as the perfect complement to fine wines. Both symbolize refinement over time; like fine wine, some cheeses improve with age. Wine and cheese pairings can range from sublime and sophisticated to fun and festive.

Cheese has been written about by Homer (the renown Greek poet, not Homer Simpson) and Aristotle, but its essence may have been captured best by an American writer named Clifton Fadiman who once said “cheese is milk’s leap toward immortality.”

In Albuquerque, a veritable altar to some of the best cheeses in the world can be found at the Downtown Gourmet, a fabulous 1200 square foot fromagerie and grocery store across Central Avenue from Robinson Park. Though technically on the western fringes of Downtown and technically not a grocery store (at least not in the traditional sense) by anyone’s definition of location and store, it’s a little piece of heaven–especially if you love cheese.

The Downtown Gourmet is a full-service retail shop offering over 90 cheeses from around the world. It also has a treasure trove of locally grown and/or organic vegetables and fruits (when available) and offers a wonderful selection of fresh and frozen entrees.

If you’ve ever looked upon shopping as a tedious, but necessary evil, the Downtown Gourmet will change your outlook. Who wouldn’t have fun if they could sample anything in the store before buying it? Who wouldn’t delight in the type of personalized attention that makes you feel special? That’s the feeling you get when you walk into Downtown Gourmet and meet that special lady behind the counter.

The heart and soul of Downtown Gourmet is its effusive proprietor Carey Smoot, the true Downtown Gourmet. Carey is the consummate hostess and she’s designed her shop to reflect her culinary passions. As genuine and friendly as any restaurateur, she genuinely loves introducing her customers to some of the unique products she offers. Visit often enough and you’ll eventually sample everything.

Carey also loves to ply her extraordinary talents in her kitchen where she prepares gourmet quality entrees for take-out. Her specials vary daily and lean toward healthy, comforting entrees prepared extraordinary well. Health-conscious consumers will appreciate both the reasonable portion size and the lightly salted quality of her culinary fare. Most of all, they will appreciate the taste.

An apt description for a meal prepared by Carey and intended for immediate consumption might be “fine China quality gourmet food heated in a microwave and served in plastic containers.” The ambience for this repast might be provided by the historic Robinson Park’s verdant surroundings where picnic tables serve as your dining platform.

None of that is a bad thing. In fact, it makes for a very enjoyable dining experience. I’m just so pleasantly surprised and happy to find such high-quality cuisine being served outside of a high-priced restaurant.

Credit that to the delightful Ms. Smoot who revels in taking treasured family recipes (yours or hers) and concocting something delicious–something which resurrects memories. If it’s true that fragrance is among the most potent medium for conjuring up a memory, let Carey apply her talents toward recreating one of your childhood favorites.

She did that for me–not by design, but in offering Beef Stroganoff as a special of the day during my inaugural visit in January, 2008.

My very first memories of this Russian dish stem from having prepared a reconstituted version as a Boy Scout some thirty plus years ago. No one else in Troop 512 would even sample this “sophisticated,” albeit packaged dish, which as it turns out, was a good thing for me. Since then, I’ve ordered Beef Stroganoff every chance I get.

Carey’s rendition of Beef Stroganoff (pictured at right) was not only infinitely better than the one I prepared over a campfire, it brought back treasured memories of my youth when my energy was boundless and calories melted off my then svelte frame.

At its elemental form, Beef Stroganoff is a dish comprised of strips of lean beef sautéed and served in a rich sauce infused with sour cream. Onions, mushrooms, egg noodles and various spices are part of the entree, too.

In its sublime form, the aforementioned ingredients meld into utter deliciousness–the creaminess of a rich, flavorful sauce; the pleasant texture and earthy flavor of tender mushrooms; the hearty aroma of sautéed beef and a noodle accompaniment that puts it all together.

Carey’s rendition is sublime, probably the best I’ve had in New Mexico. Never mind the plastic container and utensils, this is Beef Stroganoff the type of which you might find served on fine China with the best silverware.

Another memory-triggering special of the day was a Leek and Potato soup, the likes of which we hadn’t had since dining at the Mermaid Inn in picturesque Burford, England. While Europeans (particularly the Welsh) love leeks, they are vastly underutilized in America and that’s a shame because this relative of the humble onion is replete with flavor. Carey herself might describe her leek and potato soup as soul-warming and that would be an accurate description. Comparatively, this is not a rich soup, but it is a delicious one that will truly warm the cockles of your heart and leave your taste buds gloriously happy.

If the Beef Stroganoff and Leek and Potato Soup rekindled old memories, Carey’s Pasta e Fagioli made new ones. Few Albuquerque restaurants serve Pasta e Fagioli and by default, that had rendered Olive Garden’s version my heretofore favorite in the Duke City. No more! Carey’s rendition is not the tomatoey, soup-thin facade served at Olive Garden. It’s a hearty, heart-warming dish with a thick, delicious broth and succulent, fresh vegetables.

If I haven’t written about your favorite or soon-to-be favorite cheese, that’s solely because YOU need to visit the Downtown Gourmet where Carey is waiting to make a new friend out of you. You can thank me after you’re done imbibing all the aromas and flavors of a little shop on Central Avenue that’s a little bit of heaven.