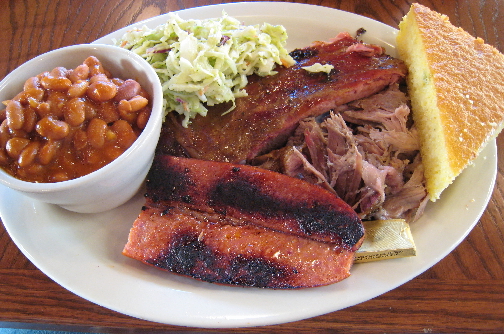 Perhaps indicative of the world becoming more broad-minded and accepting, “peasant food” (which usually includes traditional foods of specific regions) is now looked upon as a culinary art form in which skillful cooks are celebrated for employing the wisdom of the ages to prepare wonderful meals using inexpensive, generally home-grown, ingredients.

In France, the term peasant food is actually translated as “food of the country” because it is usually associated with poor rural farmers.  In Laos, Vietnam and Thailand, peasant food is regarded as a visible tribute to the inherited knowledge culled by generations of peasant food producers honing the ideal cuisine of their regions. In the United States, three of the most obvious examples of down-home, regional peasant food are our own New Mexican cuisine, Louisiana Creole and of course, barbecue.  To generations, this is comfort food at its very best, the delicious bounty of a rustic life.

Alas, as a commercial enterprise, barbecue restaurants often seem to perpetuate a bumpkinly stereotype.  The “template” seems to include red and white checkered cloth tablecloths adorning oak tables, cute ceramic pig figurines on the counters and country music blaring from a tinny stereo.  At the extreme end of this stereotype, you might even see bails of hay, barbed wire and steel buckets serving in some fashion as part of the “ambiance.”

Josh’s Barbecue is at the opposite end of the spectrum, situated in a sophisticated edifice with exposed duct work on the ceilings, stainless steel appliances and other modern restaurant accouterments.

You’ll  have to look hard for the trappings of the stereotypical barbecue restaurant.  Sure, there’s a colorful saddle by the railing behind which diners queue up, but it has a utilitarian purpose–it holds laminated menus which diners study before they place their order.  the most “countrified” ornamentation on the walls are several framed picture of decorative, multi-hued cowgirl boots.

Josh’s launched in April, 2006 in Santa Fe’s then brand new San Isidro Plaza.  It is adjacent to the parking garage at the multiplex theater complex and is one of several new strip malls and businesses in the city’s burgeoning southwest sector. Josh’s Barbecue wasn’t even open yet when the May, 2007 edition of Santa Fean magazine went to press with its “Chef’s Picks” issue in which the city’s chefs were surveyed about their favorite dining venues.  Although the public had yet to savor Josh’s handiwork, his restaurant garnered a “best new restaurant” vote with one chef confiding “I’ve tasted Josh’s recipes and his is the best barbecue around.”

The Josh behind this enterprise is Josh Baum, a graduate of the Scottsdale Culinary Institute, a Le Cordon Bleu affiliated school.  His spangled resume includes tenure as sous chef at the Old House Restaurant under the tutelage of executive chef Martin Rios, a culinary icon in the City Different and beyond.

As the unnamed chef confided, Josh’s barbecue may indeed be the best barbecue around.  His restaurant had been open for just under a month when we first visited.  I wondered if the lengthy queue of diners waiting to place their orders  would be there months later or if the long line was characteristic of the “new restaurant syndrome.” Studying the mesmerized faces of diners besotted by the aroma of smoked meats, I surmised that these diners would probably be back.  After our meal, I became certain Josh’s would become their favorite barbecue restaurant in Santa Fe, perhaps New Mexico.

On each table (sans red and white checkered tablecloth) is a carousel with three different sauces: a “seasonal” sauce, a “traditional” sauce and a “traditional hot” sauce.  Purists will argue that well-smoked meats need no ameliorants and that sauces mask inferior barbecue.

Josh’s smoked meats need absolutely no sauce, but if you’re so inclined, these sauces might just blow you away, especially if you don’t waste your time trying to discern the genesis of their unique flavors.  The sensational seasonal sauce, made with blackberries, honey and bourbon is reflective of Josh’s inventiveness.  The traditional hot sauce creates a nice warming sensation at the back of your throat.

One appetizer sure to become a local favorite is the chile con queso with carne adovada.  We’re not talking smallish shards of carne here.  Covered in a creamy cheese concoction are large chunks of smoked porcine perfection.  The thin tortilla chips were in trouble when they had to bear the weight of the carne adovada so you might want to dispense with them and use a fork.

The chile con queso is also available with pulled pork and similar to its counterpart with carne adovada, there’s pulled pork a plenty on this appetizer.  This isn’t your Velveeta con queso.  It’s thick, rich and utterly delicious.

Josh obviously understands his clientele by offering a wedge of green chile flecked cornbread with each plate.  This cornbread isn’t dessert sweet or crumbly as some cornbread tends to be.  Neither is it dominated by the green chile.  Instead it melds the best of a quintessential rural (peasant) Southeastern bread with the very best the Southwest has to offer–a piquant New Mexico green chile.

The taste of green chile is somewhat more prevalent in the green chile coleslaw, one of several available “sides.”  This coleslaw is light on the salad cream and heavy on flavor, particularly of the “sneak up on you” green chile and of pepper.  It is the antithesis of the Colonel’s runny, cloying coleslaw.

The meats are all delicious: fall-off-the-bone ribs; tender, smoky pulled pork; incendiary hot links; juicy and tender brisket; spicy Polish sausage and a uniquely wonderful smoked carne adovada (which would have been made even better with a flour tortilla).  This is barbecue at its finest, a step up from what might be considered “peasant food” but still a progeny of the best in down-home cooking traditions.

Meats are available by the half pound, on plates, as family meals and as sandwiches.  Your best sandwich bet just might be “The Slammer” because you get to choose one meat and one sausage, both of which are engorged between sesame seed burger buns barely able to contain all the meat piled on them.  Polish sausage and pulled pork make a surprisingly good combination with the spicy, smoky sausage serving as an interesting foil for the delicate pulled pork.

One of the most delicious qualities of Josh’s smoked meats is that they’re not heavily saturated with smoke.  There’s just enough smoke to let you know it’s there, just enough to imbue it with the unmistakable bouquet of wood fragrance.  That’s all Josh’s turkey club needs to set it apart from the boring day after Thanksgiving leftover turkey sandwich.  Well, that and crisp bacon, avocado, mayo, tomato and lettuce.   This is simply one of the very best turkey club sandwiches I’ve ever had.  It’s not a multi-layer skyscraper of a sandwich as some club sandwiches tend to be.  The turkey is sliced into generous quarter-inch thickness and it’s the star of a sandwich imbued with all-star accompaniment.

Among the New Mexico inspired barbecue specialties are smoked chicken tacquitos. Most tacquitos, it seems, are cigar-shaped and tightly wrapped corn tortillas with a dryish chicken and bean amalgam. At Josh’s, the tacquitos are thick and moist, packed with delicious smoked chicken almost juicy enough to have come from a chicken stew. The tacquitos are served with a mildly piquant salsa that seems tailor made for the lightly crisp tortilla shells and their pronounced corn flavor.

With Josh’s Barbecue around, you won’t hear too many Santa Feans deliberate the merits of barbecue from Memphis, Kansas City, the Carolinas or Texas.  That’s because they’re too busy smacking their lips and uttering yummy sounds as they enjoy the city’s very best barbecue.