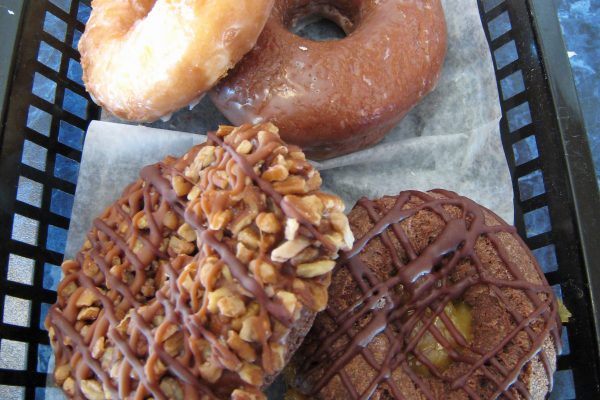 Their Points of View.
‘Twixt optimist and pessimist
The difference is droll;
The optimist the doughnut sees –
The pessimist the hole.
– New York Sun, 1904

It’s almost deliciously ironic that the “Optimist’s Creed” references the oft-maligned donut. In recent years, donuts and their high-carb brethren have been damned and all but banned by the “nutritionally correct” who believe America should supplant these decadent orbs of sugary deliciousness with tofu, celery sticks, carrots and beef juice.  Donuts went through a period in which they were nearly as popular as terrorist extremists at a New York City fire department party.  Even the once sanctified Krispy Kreme saw its stock prices plummet.

In such a climate of adversity, it is donut purveyors who have to be eternal optimists even as their product is assailed and vilified. Albuquerque has in recent years seen the demise, departure or diminished numbers of Krispy Kreme, Shipley’s Donuts, Winchell’s Donuts and even Dunkin’ Donuts. Whether it was an onslaught of health-crazed fanatics, reduced ranks in the police force or a combination of other factors, the Duke City can hardly be called the Donut City.

In an article for Saveur, writer extraordinaire John T. Edge, who spent a year on the road researching Donuts: An American Passion (Putnam, 2006), posited that America is undergoing a resurgence in its “love for fried, glazed, filled, and jimmie-sprinkled poufs of dough,” declaring that “the best American doughnuts transcend fads.”  If the recent upsurge in the number of donut shops in Albuquerque is any indication, perhaps donuts also transcend the so-called nutrition police.

In April, 2010, Albuquerque’s burgeoning west side saw the launch of GoNuts Bakery & Sandwich Shoppe, a colorful little shop in the Paradise Hills Shopping Center.  It’s one of a handful of donut stores in Albuquerque, most of which have launched in the past five years or so, perhaps signaling somewhat of a renascence in the Duke City of the popularity of the donut.  GoNuts is located at the former site of the fabulous Painted Horse Coffeehouse and prior to that a bagel shop.

Appropriately the marquee on the store’s frontage depicts a long-tailed squirrel holding a donut in its paws.  The shop’s interior is festooned with pink, blue, ocher and purple colors.  A slate board lists several sandwiches, tempting to be sure, but it’s the donuts under glass to which most patrons seem magnetically drawn.  These are no ordinary donuts, nor are they even the same donuts day-after day.  The donut menu rotates frequently with new additions added whenever the baker has a fit of creativity.

GoNuts Donuts has been locally owned and operated since its inception.  It is currently owned by Daniel Galindro, an entrepreneur with big plans for the donut shop he bought from the family which founded it.  He plans, for example, to bring in pastrami from New York City–pastrami he says will be better even than what is offered at nearby California Pastrami, my local benchmark for great pastrami.  It’s an audacious claim, but if the donuts are any indication, he may be able to pull it off.

GoNuts Donuts are yeast-based which helps them rise and gives them a light and airy texture.  They’re not dense and filling nor are they overly sweet.  Best of all, they’re creatively different.  It’s not everywhere you find caramel turtle and German chocolate donuts.  It’s not everywhere you find donuts this good.  Alas, once they run out of the day’s donut menu, the donuts you fall in love with today may not be available for a while.  That just means you’ll have to try something new and exciting during your next visit.