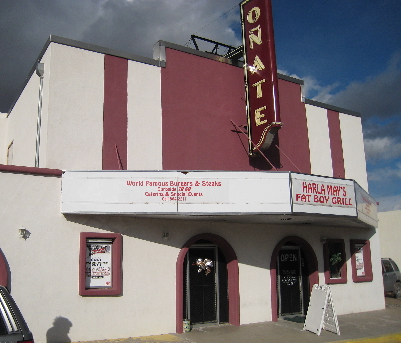 Many of us who grew up in small town America during the 60s sometimes pine for the more innocent days of our youth–the days before cable television gave us hundreds of channels (and nothing to watch) and video games became the only form of exercise (albeit, of their thumbs) our children get.

Back then, the movie theater was the town’s cultural center. It was where small-town America congregated to see Hollywood blockbusters (about two years after they hit the big cities) as well as movies which introduced our innocents to the Hell’s Angels, Bruce Lee, Godzilla and campy Sonny and Cher movies.

The small-town American theater in New Mexico also meant Cantinflas, the campesino once referred to by Charlie Chaplin as the greatest comedian in the world.

It meant not only American “shoot ’em up” Westerns featuring rugged cowboys, rowdy rustlers, round-ups and home on the range, but the Mexican equivalent–movies featuring the exploits of charros, the traditional cowboys of central and northern Mexico.

The small-town American theater was where boys and girls went to hold hands in the dark back in the days when “getting through the bases” took considerably longer than it does today. It truly was a more innocent time.

There was no such thing as multiplex or megaplex theaters with their stadium seating and upscale amenities. Those would come later and they would drive the small-town theater our of business. The Oñate Theater in Belen, New Mexico was the quintessential small-town movie theater. Ensconced in the heart of the heart of the city directly across the street from the Anna Becker Park, it was built in 1932 and served Belen for decades. The 1950 edition of the Film Daily Yearbook indicates the theater had a seating capacity of 600.

After its closure, the venerable Oñate fell rapidly into disrepair and was literally on the path to destruction when visionary entrepreneur Anthony Baca, a Belen resident, salvaged it. Baca first conceptualized the idea of converting the theater into a restaurant in 1993. The conversion was a laborious, painstaking process considering the theater’s state of decline–a process which included leveling the floor and removing most of the theater’s original seats.

Baca launched his restaurant, Harla May’s Fat Boy Grill, in September, 2004. Today the Oñate’s proud lights once again illuminate the town center at night and while the still functioning movie screen no longer features blockbuster movies, breakfast-goers on Sunday mornings now clamor to see their favorite teams in action on a bigger screen than you’ll find at any sports bar.

You won’t find any listings for a Harla May in Belen’s White pages. Baca made it up. Nor are there outward signs that the Harla May character on the menu and Web site was inspired by Baca’s lovely bride of more than 25 years, the restaurant’s gracious host Carmen. The Harla May character seems to be a composite of 1950s pin-up Bettie Page and Daisy Mae Scragg, Li’l Abner’s beautiful and faithful girlfriend–both characters possessing an alluring mix of seductiveness and innocence.

The tagline beneath Harla May’s image reads, “We relish your buns,” the sort of double-entendre you can’t help but appreciate.

The restaurant has become a veritable museum with thousands of items of memorabilia (not the vintage knock-offs you see at some 50s themed restaurants) adorning just about every space on the theater walls. A trip down memory lane is definitely in order.

That trip begins in what used to be the theater’s lobby where a circa 1940s Coca-Cola machine stands next to what was once a concession stand. The lobby is your starting place for a nostalgic tour of a bygone era. The red and white checkerboard suspender attired Bob’s Big Boy mascot seems to watch over diners in the restaurant’s upper tier seating area. Framed photographs of celebrities share space with copies of Life magazine published in the 1950s and 60s. Marilyn Monroe and Betty Boop are celebrated there, too, as are the larger-than-life athletes of the era.

On a corner wall by the restaurant’s entrance are empty movie reels which once held photographic film (back in the days before digital) for movies which may well have been shown at the Oñate. One photograph on the wall depicts the Oñate’s marquee when it featured the 1946 movie My Darling Clementine. Automobile rims, hubcaps, various car parts and several out-of-state license plates hang on the walls as do album covers from the days before iPods and music downloads. The baby boomers among us will marvel at just how the world has changed. Some of us may even wish it hadn’t changed so much and so quickly.

Harla May’s serves breakfast, lunch and dinner. You can even call in your order and a member of the genial wait staff will have it waiting for you curbside. Harla May’s also hosts parties, weddings, reunions and celebrations of all sorts. Live entertainment is provided regularly (including a comedy show in November, 2009 headlined by Minnesota’s maiden of mirth Mary Mack). It’s easy to remember the restaurant’s hours: 10:57AM to 9:57PM Thursday through Saturday and 6:57AM to 2:57PM on Sundays. There isn’t anything about Harla May’s that’s forgettable.

Frampton might just come alive in your memories while you dine thanks to selections from Sirius Satellite radio’s Totally 70s which is piped through the restaurant’s sound system. Greg Brady himself, Barry Williams will be your host.

The menu includes everything from burgers to a 36-ounce USDA choice aged beef T-bone steak. It’s an ambitious menu with literally something for everyone. The appetizer section, called “Got the Munchies” includes many favorite starters, all cleverly named. Who, for example, could possibly want flaccid fries when you can have Harla May’s frisky fries? Why have picayune pot stickers when you can have the Dragon Lady’s Pork Pot Stickers?

These are pot stickers on steroids–nearly the size of an empanada. They’re fried to a golden sheen and are engorged with finely shredded pork and cabbage. Five pot stickers to an order will have couples fighting for the odd-numbered one left over.  Unfortunately, they’re served with an insipid sweet and sour sauce packaged in one of those confoundingly difficult to order packages, the type of which some restaurants use for jams.  These pot stickers deserve better.

Harla May’s signature entree is the Fat Boy burger, described on the menu as the ultimate one-pounder with the works: chile, cheese, lettuce, tomatoes, grilled onions, Smokehouse bacon, guacamole and onion rings. At more than ten bucks, it’s a pricy burger but one that will ensure you won’t be hungry for a while.

Years ago Burger King bragged that “it takes two hands to handle the Whopper,” a two-fisted burger that probably weighs in at a quarter pound or so. It pales in comparison to the Fat Boy, one of the biggest burgers to grace a grill in New Mexico. This burger is not only the size of the Sears Tower, it’s absolutely delicious. Two six-inch beef patties are perfectly prepared and seasoned. It’s embellished with complementary ingredients that adorn those patties with flavor.

Fire-eaters will want to substitute the standard chile used on the Fat Boy with Padilla’s Jarales “hot” green chile. Jarales, a small community south of Belen grows some of the most piquant peppers in the state, a chile that will not only set your mouth on fire, it will tantalize your taste buds. It’s an outstanding green chile, perhaps second on the Scoville piquancy scale to the chile at Santa Fe’s Horseman’s Haven restaurant.

Wimpier burgerphiles will downscale to Harla May’s standard burgers which are a “mere” half-pound of creativity. They might want to sink their teeth into Holley’s Hawaiian burger (with grilled onions, pineapple, green chile, cheese and smokehouse bacon) or maybe a buffalo burger (called the Rocky Mountain Ripper). This is a burger lover’s paradise, offering fourteen burgers.

If a green chile cheeseburger is what you crave, ask for the Flame Thrower which is made with Padilla’s Jarales “hot” green chile. Unlike with the Fat Boy, you won’t have a mountain of ingredients to deflect any of the heat.

All burgers are served with Harla May’s wonderfully seasoned and perhaps twice-fried fries. These are excellent fries and if, like me, you’re unable to fit the tomato, lettuce, pickle and guacamole on your Fat Boy, have the aforementioned vegetables as a salad (with the ranch dressing) and use the guacamole instead of ketchup. Harla May’s guacamole is rich and creamy, flecked with bits of chile. It’s guacamole you might want to consume by the spoonful.

Many menu items are named for family members, including Matt’s Favorite Spanish Flower, a deep-fried tortilla with beef or chicken, lettuce, tomato and two types of cheese. It’s topped with guacamole and sour cream.

It’s easy to see why this is Matt’s favorite. While many tortilla-based, so-called taco salads scrimp on everything but lettuce and tomato, this Spanish flower abounds in the flavor of seasoned beef and cheese. It’s a good flavor. The fried tortilla is excellent as well.

The menu includes three cast iron skillet entrees including a carne adovada skillet filled with delicious carne adovada on top of papitas and two fried huevos.  For tongues not laced with asbestos, the carne adovada should come with a hazard warning. Not only is the chile addictive, it’s smoldering hot–as in some of most piquant chile you’ll find in New Mexico.  It’s the type of chile that will get your attention and capture your affection.  Alas, as great as the chile is, this skillet seems to showcase the papitas more so than the adovada.  The papitas to adovada ratio should be reversed.

If you manage to have room for dessert, the offerings won’t disappoint. Six ice cream (chocolate, vanilla and strawberry) desserts lead the cavalcade of calorie-laden sweets on the menu. In cold climes, however, you’ll want one of Harla May’s cakes or pies, all but one of which are named for a family member. Prodigious portions apply here, too.

If your waitress recommends Noah’s Apple Dumpling, heed and obey. It’s a rich and delicious pastry engorged with sweet apples and topped with a warm cinnamon syrup. The pastry crust is thick, but as delicious as a sugar cookie. You won’t leave a crumb.

Another terrific dessert option is Ann’s Snicker Doodle Pie (which is nothing at all like the snickerdoodle cookie). Harla May’s rendition includes Snickers candy bar and portions of brownie. It’s drizzled with melted chocolate and will put calories on you just be being in its presence. Fortunately you won’t be in its presence for long because you’ll quickly dispatch of this scrumptious pie.

Harla May’s is much more than a terrific restaurant. It’s an experience to be shared and enjoyed by family and friends. It’s a cultural celebration of a somewhat more wholesome era that one fatalistic friend says predates the prelapsarian era to come. It’s the type of restaurant you don’t just visit–you experience it. It’s an experience you’ll long remember.