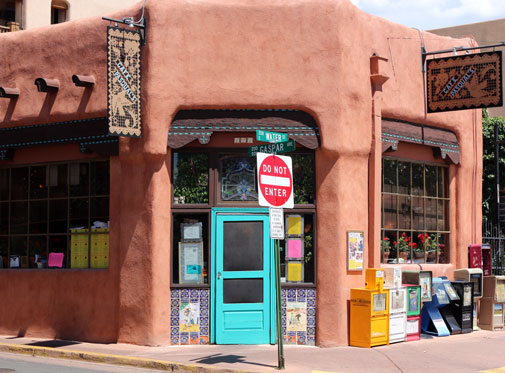 Pasqual Baylon’s devotion to the Mass and the Holy Eucharist was so fervent that when assigned kitchen duty, angels had to stir the pots to keep them from burning.  It’s ironic therefore that San Pasqual is the recognized patron saint of Mexican and New Mexican kitchens, a beloved saint whose smiling countenance in the form of various art forms graces many a kitchen, including Katharine Kagel’s kitchen in the world famous Cafe Pasqual, one of Santa Fe’s most popular restaurants.

Cafe Pasqual is a very small cafe with seating for only 50 patrons sitting in very close quarters. Prospective diners place their names on a waiting list then typically wait half an hour or more to be seated, usually longer if they want a “private” table (where you’re still elbow-to-elbow with your neighbors). Quicker seating is usually available if you’re willing to share space in the large community table where you can break bread with diners from all walks of life.

Located one block southwest of the plaza in the heart of downtown, the split-level dining room is one of the most colorful venues in the City Different with a festive ambience that includes multi-hued, hand-painted Mexican tiles and murals. The hurried (but never harried) wait staff somehow manages to navigate the cramped quarters without spilling food all over the floor. Sometimes attired in tee-shirts depicting the Virgen De Guadalupe, patron saint of the Americas, they remain accommodating and friendly despite having to keep a nearly frenetic pace.

In 1999, Cafe Pasqual was accorded the James Beard Foundation’s “America’s Classics Award,” an honor bestowed to only four recipients a year. This prestigious honor recognizes locally owned and operated restaurants in operation for ten years or more that are beloved in their communities for their unique food and ambiance and which exhibit timeless appeal. Proprietor and chef Kagel was also nominated that year as the Best Chef in the Southwest, not her only nomination for this honor.

Cafe Pasqual is indeed an American classic, celebrating for more than three decades, culinary traditions inspired by New Mexico, Old Mexico and Asia (especially Thailand) with a pronounced dedication to fresh, seasonal, organic and naturally raised foods. In 2003, writing for Epicurious.com, authors Jane and Michael Stern declared Cafe Pasqual one of America’s top ten restaurants for breakfast. The restaurant was also a perpetual mainstay on Chile Pepper magazine’s “best of zest” listing of the best in Southwest restaurants.

The bustling corner cafe in the ever-familiar pueblo style building first opened in 1979 and has experienced overflow crowds for years.  Katharine Kagel’s philosophy, one which has guided her restaurant for years is to “gather together the best possible staff and ingredients to synergize unforgettable flavors in the most interesting and inspired way, with an eye to healthful preparation methods.”  As with so many other excellent Santa Fe restaurants she has cultivated relationships with suppliers, the growers of native and exotic fruits and vegetables used in the restaurant.  It makes a difference!

All the visits to Cafe Pasqual chronicled on this blog have been on Sundays when brunch is the featured fare. If breakfast is the most important meal of the day then the best way to greet an enchanting Sunday morning is by starting off with Mexican hot chocolate at Cafe Pasqual. Served in a glass instead of a mug, it is garnished with freshly grated cinnamon and packs a distinct, rich taste with addictive properties. It is easily the best Mexican hot chocolate we’ve ever had.

What makes Mexican hot chocolate so vastly superior to the usual cocoa power mixture is the Mexican chocolate itself.  Cafe Pasqual uses one and a half ounces of Ibarra brand Mexican chocolate in each frothy glass.  It is so rich and flavorful that true chocoholics will never return to the inferior powdered variety.  You can purchase Ibarra brand chocolate at the restaurant, by the way.

I read somewhere that your brain is most productive in the morning, but trying to decide what to order from an array of sumptuous sounding brunch entrees is a dizzying challenge–you literally want to order one of each. The good thing is you can’t go wrong with whatever you order; it’s all wonderful.

Take for example the Huevos Motuleños, eggs-over-easy on corn tortillas with black beans, sautéed bananas (the things simians like, not banana peppers), feta cheese, peas, salsa fresca and green chile or tomatillo d’arbol salsa. There’s a special treat in every bite as complementary and contrasting ingredients meld together wonderfully to compete subtly for the rapt attention of your taste buds.

While Huevos Motulenos may sound like a motley assortment of disparate (complementary if you have an imagination) ingredients, its genesis is the Yucatan peninsula in a village named Motul.  A similar breakfast entree going by the name Huevos Yucatecos is available at the Tecolote Cafe a couple of miles west of Cafe Pasqual.  Both versions are outstanding, an excellent way to start the day.  What makes this dish unique–what makes this dish–are the sauteed bananas.  You’ll marvel at the sweet and savory flavor combinations, even better the sweet and piquant flavor melding.

The breakfast quesadilla is a similarly eye-opening, mouth-watering morning delicacy. A griddled spelt (a type of wheat) flour tortilla envelops jack cheese, guacamole, scrambled eggs and salsa fresca, ingredients joined together in perfect harmony to make early morning love to your mouth. At Cafe Pasqual, eggs are invariably prepared to perfection. It’s an art form not all restaurants have mastered.

Cafe Pasqual is renown for its breakfast and brunch entrees.  Using real eggs, real butter and real potatoes, it relies on nothing commercial or frozen.  Everything is absolutely fresh.  The sausage and chorizo is made on the premises as is the bread for the fabulous toast and sandwiches.  Breakfast is served all day long in the tradition of fine cafes throughout the world.  Breakfast lovers love this practice though it does challenge the kitchen to manage two divergent menus at once.  Cafe Pasqual has been doing it so long, they excel at it.

<In cafes throughout France, we enjoyed fried potatoes for breakfast and have been dismayed when restaurants serve out-of-the-bag hashed browns that sometimes look and taste like fried rubber bands.  Cafe Pasqual specializes in fried potatoes, offering a brunch entree called MM Papas Fritas, home fries with red chile, green chile or tomatillo d’arbol salsa, scallions, melted Jack cheese and sour cream with a corn or flour tortilla.  Ask for a couple of eggs on top of this concoction and you’ll have a New Mexico take on something we loved in cafes throughout France.

A grilled free-range chicken breast sandwich is yet another lively, titivated marriage of fresh ingredients that combine wonderfully to tantalize your taste buds. Homemade toasted green chile corn bread is the canvas on which marvelously mellow Manchego cheese; sweet, caramelized onions and roasted jalapeños form a preternaturally wonderful breakfast sandwich in which sweet, savory and piquant flavors are in seemingly equal proportion to one another.

Every table includes orange and raspberry marmalade, both of which epitomize the highest standards of their respective genres. Naturally you’ll have to order the restaurant’s freshly baked and intoxicatingly aromatic bread to take advantage of those fruity bread spreads.

The breakfast and brunch menus include several sweet-tooth sating entrees.  You can also satisfy your sweet tooth with one of the restaurant’s fabulous desserts.  Desserts change daily, but they’re all so good think of it as an excuse to try something other than the one you fall most in love with.  For me, it’s the pecan-coffee tart with apricot compote and Chantilly cream.  It’s akin to a richer, more flavorful, more adult-like and not as sweet pecan pie.

My consolation prize when the pecan-coffee tart isn’t available is the toasted piñon ice cream with caramel sauce.  Being the restaurant’s best-selling and most requested dessert, the toasted piñon ice cream has made it onto the daily menu.  You won’t find this ice cream at any grocery store.  It’s made on the premises and it’s fabulous.  Not even the bone-chilling cold of the ice cream can obfuscate the wonderful woodsy taste of piñon, the little nut New Mexicans love like no other.

Cafe Pasqual is so good we’ve theorized that the patron saint of New Mexico’s kitchens himself is crafting the wondrous kitchen concoctions. Its wondrous food will make a morning person out of anyone.