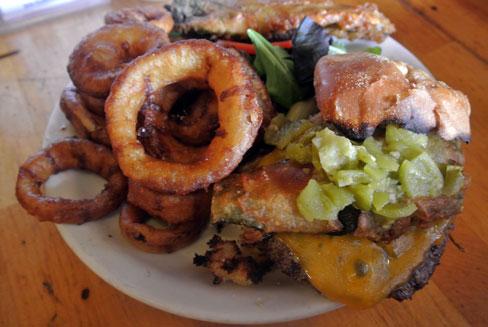 “You load sixteen tons and what do you get?
Another day older and deeper in debt.
St. Peter, don’t you call me cause I can’t go.
I owe my soul to the company store.”

Those immortal lyrics, hauntingly performed by crooner Tennessee Ernie Ford describe with a poignant reality, the plight of the American miner even onto the 20th century. By payday, which came at month’s end, miners did indeed owe their souls to the company–for the company house in which they were living, for groceries to feed their families, for doctor bills and even for the tools they used to mine.

Although many miners of the age toiled under hazardous working conditions and in virtual indentured servitude while despotic mine owners and managers benefited from their labors, Madrid’s superintendent of mines Oscar Huber was a unique sort. Under his direction, the citizenry of Madrid enjoyed unlimited electricity in their homes courtesy of the company-owned power plant, paved streets, schools, a company store and even a hospital. Commerce was still controlled by the company, however, so miners wages ultimately returned back to the owners’ pockets.

When given the opportunity, the miners played as hard as they worked. In 1922, Huber built the first illuminated baseball park (still in use today) west of the Mississippi. The stadium served as home to the Madrid Miners, a farm team for the Brooklyn Dodgers who played a game in the park in 1934. Madrid was also home to one of the most elaborate and famous Christmas light displays in America. From the 1920s through the advent of World War II, Madrid miners lit up the sky with 150,000 Christmas lights powered by 500,000 kilowatt hours of electricity provided by the company’s coal-fed generators. Commercial planes used to divert from their normal routes in order to fly over Madrid so passengers could enjoy the pageantry.

The last “company town” building erected in Madrid was the Mine Shaft Tavern whose doors opened in 1946. Within the tavern only those familiar with the difficult mining conditions pause to reflect on that heart-wrenching aspect of Madrid’s colorful history. Other patrons are there to have a good time thanks to tavern quality food and libations which flow freely.

The Mine Shaft Tavern is especially popular with old hippies and Harley Davidson enthusiasts whose “hogs” take up many of the parking spaces. The bikers congregate on the porch where they have an excellent vantage point from which to admire their bikes and those of their fellow easy riders. The tavern’s dimly lit interior appears relatively unchanged since the 1940s with canned lights that are indeed made from tin cans. Above the longest stand-up bar in New Mexico, a series of paintings by renown artist Ross J. Ward depicts Madrid’s colorful history.

From a culinary perspective only, our inaugural visit to the Mine Shift Tavern back in 2005 was a disappointment. The menu was rather lackluster and the quality of fare was pedestrian. It might best be described as “company store quality.” Marked improvement was evident during my second visit in 2011 when I dined at the Mine Shaft Tavern for a “Breakfast, Lunch and Dinner” article in New Mexico Magazine. What a difference a change of ownership can make! In 2009, Lori Lindsey purchased the Mine Shift Tavern and has made it not only “Madrid’s living room,” but one of its best dining rooms.

The menu features “New Mexico Roadhouse Cuisine” showcasing a number of specialty burgers, grilled pizza and specials such as enchiladas, fish and chips and a smoked barbecue sandwich. Dinner specials are available from Thursday through Sunday after 5PM. They include a Wagyu “Baseball Cut” Sirloin, Shrimp Brochette and Wild Mushroom Pasta. If it’s been a while since your last visit to the Mine Shaft Tavern, you might be surprised at how much more varied and inviting the menu now is. The kitchen’s “mission statement says it best: We take pride in making food from scratch using quality and organic ingredients whenever possible. Our famous burgers and “Kobe” comes right off the Turquoise Trail, from Bonanza Creek Ranch and Lone Mountain Ranch.”

With a New Mexican beef pedigree like that, you’ve got to order one of the Tavern’s six specialty burgers which are available from your choice of half-pound Angus, New Mexico Wagyu, Buffalo or Veggie. The newest specialty burger was created in 2014 for the second annual green chile cheeseburger smackdown in Santa Fe. It’s called the “Mad Chile Burger” for good reason–because most New Mexicans are absolutely mad about green chile. The more, the better! If this describes you, you’ll love the duo of roasted green chile and lightly battered and fried green chile strips. The Mad Chile Burger also includes a half-pound black Angus Chuck, aged Cheddar and Chipotle Dijonaisse on a Brioche Bun with garnish (pickles, tomatoes, lettuce) on the side.

When I ordered the Mad Chile Burger, my server (who also happens to be owner Lori Lindsey’s niece) was very prophetic in telling me it would be the winning green chile cheeseburger in the Smackdown two days later. I was skeptical until my second bite when the Chipotle Dijonaisse kicked it. With the heat-generating triumvirate of roasted and chopped green chile, battered and fried green chile and Chipotle Dijonaisse, this burger blesses you with three times the love and three times the flavor you get from most green chile cheeseburgers. The battered and fried green chile strips, similar to a chile relleno without the cheese, are especially addictive. The Chipotle Dijonaisse has the tanginess of mustard with the piquant kick of chipotle, a combination which renders mustard unnecessary. In fact, to add anything else to this burger would be to desecrate it. It is simply one of the very best green chile cheeseburgers in New Mexico. Smackdown attendees obviously agreed, according the Mad Chile Burger the “people’s choice” award for 2014.

All burgers are served with your choice of fresh cut French fries or coleslaw. For a pittance more, you can substitute a salad, sweet potato fries or black and tan onion rings. Better still, order an appetizer-sized Hatch green chile basket, the same fried, fire-roasted Hatch green chiles found on the Mad Chile Burger. Served with Ranch dressing, these green chiles will give you yet another reason to be mad about green chile.

Fittingly, the Mine Shaft Tavern is on the New Mexico Green Chile Cheeseburger Trail and was also recognized by the New Mexico Tourism Department as a Culinary Treasure.

6 thoughts on “The Mine Shaft Tavern – Madrid, New Mexico”