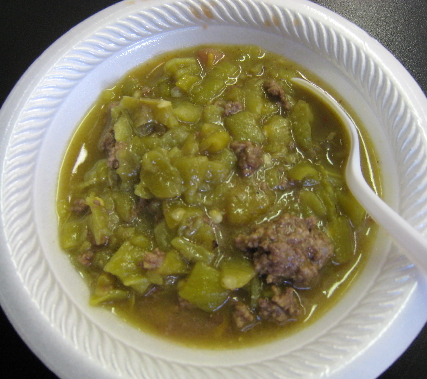 NOTE:  On November 15th, 2008, Ron Chavez sold the Chili Stop a mere four months after making green chile a religious experience.  I have not visited the Chili Stop since it changed hands and have heard mixed opinions on the Chili Stop post Ron.  I will update this review after my next visit.

Over the years it’s been my experience that almost invariably, New Mexican restaurants which violate traditional New Mexican grammar don’t prepare the object of their grammatical faux pas very well.  The grammatical transgression of which I speak is forgetting the “i” before “e” rule and committing the piquant peccadillo of spelling New Mexico’s official state vegetable with two “i’s” and no “e’s.”

It’s entirely forgivable that chile is technically a fruit, albeit one which packs an incendiary capsaicin punch, but like many New Mexicans, I feel personally insulted when presented with a menu offering “chili.”

That abhorrent spelling brings to mind something long-time New Mexico senator Pete Dominici supposedly once said on the Congressional record. Not one to mince words, “Saint Pete” is credited with saying “chili” is “that inedible mixture of watery tomato soup, dried gristle, half-cooked kidney beans, and a myriad of silly ingredients that is passed off as food in Texas and Oklahoma.”

When Dale, a faithful reader of my Web site suggested I try The Chili Stop for a “great green chile cheeseburger,” my initial reaction was to question the authenticity of the product based solely on the spelling on the marquee. My preconception was cemented by the fact that the Chili Stop occupies the western side of the edifice which once housed the now defunct Bombay Grill and previous to that, a Chinese restaurant. The building still more closely resembles a pagoda than a restaurant, much less one that serves New Mexican food.   There’s a saying about assuming that would be appropriate here.

The inimitable aroma of green chile wafted toward us as we approached The Chili Stop. No ordinary green chile was this. The aroma was reminiscent of green chile roasting on a comal. Only the hissing and spitting of blackening chiles was missing.

The green chile which captivated us was simmering on a stove. We didn’t need to taste it to know it would be absolutely wonderful. The aroma was enough to make our mouths water. The chile, as it turns out comes from the Deming area in Luna county, an area not nearly as famous for its chile as Hatch, more than a hundred miles away. Perhaps it should be.

The Chili Stop is owned by Ron Chavez who moved back home to Albuquerque after retiring from the Los Alamos scientific laboratories. An avuncular gentleman, Ron has absolutely no compunction about the spelling of his restaurant’s name. His brother, a retired teacher who made several trips to South America told him “chili is a vegetable and Chile is a country,” a contention backed up by several sources. I couldn’t argue. Well, I could have, but feared he wouldn’t serve me any of the amazing siren-like chile tantalizing my nostrils and teasing my taste buds. For some of Ron’s chili, I’d spell it “chilly” if he wanted. It’s that good!

The Chili Stop opened in June, 2008 in the 900-square-foot area which once served as the Bombay Grill’s kitchen. It is situated in the same building as the Arte de la Mano salon and has seating for only a few patrons.  Within weeks after launching, Ron received offers to expand his business to Rio Rancho and other parts of the Duke City. Though he plans to mull over those offers, he also plans to keep his inaugural restaurant venture.  Within weeks, he was also contacted by the Food Network who had heard about his fabulous green chile.

During his years in Los Alamos, Ron opened and sold four restaurants and introduced the breakfast burrito to the city on the hill nearly 30 years ago.  The reason his business will thrive is some of the very best green chile I’ve had in years. If, like me, you’ve lamented the lack of truly outstanding green chile in Duke City restaurants, you’ll love the Chili Stop.

The secret is in the way the deliciously earthy chile is prepared. It’s simmered for hours as called for in a secret recipe that’s been in the family for more than 35 years. This is green chile that packs a punch, the way it’s supposed to. Despite the “anglicized” name, this is no gringo chile (no offense intended).  A bowl of green chile will clear your sinuses. It’s served with ground beef and can be topped with shredded cheese to cut the capsaicin bite if you wish. You can also have it with New Mexico’s other official state vegetable, frijoles.

Prop your elbows on the table and your face as close to the chile as you can because you’ll want to imbibe all the aroma and all the flavor you possibly can from the neon green chile that will captivate you. The burning sensation will generate an endorphin rush that will remind you why you fell in love with green chile in the first place.

This burger starts with about six ounces of hand-formed beef topped with the traditional burger standards: mustard, lettuce, pickles, tomato and of course, phenomenal green chile nestled between sesame seed buns. It is a handful of moistness–about three napkins worth–and explosive flavor.

One of the “not to be missed” items are cheese enchiladas with a fried egg on top. If you prefer meat enchiladas, I would still recommend ordering the cheese enchiladas because there is beef a plenty on that outstanding green chile. The enchiladas are stacked, the way they’re made in Northern New Mexico. North, south, east or west, they really are among the very best!

The salsa is fresh and piquant at about medium thickness. The chips are relatively low in salt and more than capable of scooping up large quantities of salsa–if your tongue is laced with asbestos. The salsa is almost as piquant as the green chile.

The menu also includes both soft and hard-shelled tacos as well as a Navajo taco Ron’s staff raves about.  The soft taco is engorged with ground beef, shredded cheese and your choice of red chile. The hard-shelled taco also includes lettuce and one of the small touches that’s a difference maker in my book–cheese atop the meat so it can melt NOT atop the lettuce.

The Chili Stop is open for breakfast starting at 6AM. Breakfast burritos are featured fare. Unless you request otherwise, the burritos are hand-held, a large tortilla engorged with potatoes, eggs, bacon and of course, that soon to be legendary green chile.  You can also have your breakfast burritos smothered.   Have one (or two) for breakfast with a Diet Doctor Pepper and the endorphin rush will carry you through the rest of the day.

Over the years I’ve derided the spelling “chili” and am finally ready to eat crow about it and accept the fact that it’s not the spelling that counts, but the flavor. Of course, the crow would have to be topped with some of the Chili Stop’s fabulous green chili.