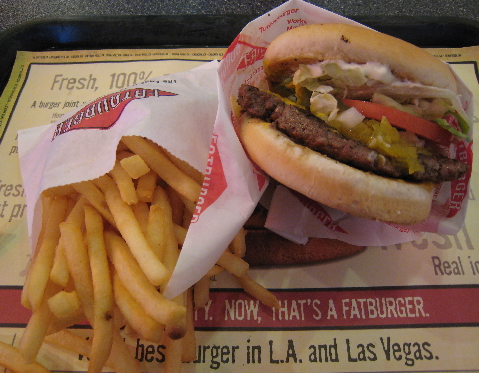 To its detractors, there are a lot of things about which to criticize California, but even detractors will give the Golden State its due when it comes to a national obsession–the hamburger.  California is the state that gave America McDonald’s, In-N-Out Burger and my favorite, the Fatburger. (My Illinois in-laws will remind me with proud vehemence that the “original” McDonald’s restaurant location (launched on April 15th, 1955) was in Des Plaines, Illinois, but the “first” McDonald’s hamburger stand operated out of San Bernardino in 1954.)

To some readers, my declaration of Fatburger being my favorite California burger may be seen as heretical, the schismatic raving of a mad man and proof that your humble blogger is a moron.  I’ve had friends throughout the country question my patriotism, parentage and credentials as an essayer of restaurant reviews because of my declared preference for Fatburger and disdain for another California burger chain they prefer.  “How,” they protest “can anyone possibly prefer Fatburger to In-N-Out?”.  It’s easy!  Fatburger is superior in every way…at least to me.  Your opinion may differ, of course, but this is America and people are free to dissent even on crucial matters such as expressed burger preference.

My Kim and I celebrated the announcement the August, 2019 launch of New Mexico’s first Fatburger.  Located in the food court at the Isleta Resort & Casino alongside Panda Express, it seems somewhat out-of-place because we’re used to driving up and placing our order through a loudspeaker.  At Isleta, the malodorous wafting of hazy cigarette smoke manages to find its way to the food court, but the closer you get to Fatburger, the more the aroma of made-to-order burgers captures and enraptures your olfactory senses.

Fatburger was founded in 1952 when Lovie Yancey launched her first restaurant in East Los Angeles…and for the record, despite being the target of derision on Jay Leno’s Tonight Show monologues (undoubtedly based solely on the name), the name Fatburger has nothing to do with the burger’s composition or contents. The name Fatburger was derived from the term “fat” which in the 1950s meant you had really made it (as in Fat Cat, Fat City or Fat Times). As they say, what goes around, comes around. In the early 21st century, the adjective “phat” was heavily used in Hip Hop culture to denote someone or something that is cool, rich, entertaining, intelligent, fly or otherwise to be admired. So, fat is good!

Fatburger prides itself in using only choice domestic beef and the freshest ingredients and condiments available. You can have your burgers grilled the conventional way or char broiled for an even bigger taste treat.  The meat patties are made from fresh and lean USDA domestic beef, not the puny, frozen mystery meat served at other burger restaurants.  Standard condiments include mayonnaise, sweet relish, onions and your choice of other additives (including cheese or egg, bacon or chili, or ranch dressing).  Burgers are available in large (a half-pound kingburger), XXL (a one-pound double king) and XXXL (a 1.5 pound triple king).  By the way, despite all the jokes at Fatburger’s expense, in 2014 Jay Leno surmounted the “Fatburger Challenge,” devouring an entire three-patty, 24-ounce Fatburger with all the fixings in five-minutes flat.

31 October 2019: Between the two of us, my Kim and I couldn’t possibly eat a 24-ounce Fatburger in one sitting no matter how much time we were given.  During our inaugural visit to the Isleta Fatburger, we did, however, each enjoy a half-pound kingburger, both prepared to our exacting ingredient specifications (no lettuce, tomato or pickle for her; “the works” for me).   For my Kim, the Fatburger was a walk down memory lane to all the Fatburgers we’ve enjoyed in California and Arizona.  She enjoyed every bite.  My burger was well-done (#$%*&!), a degree of doneness no burger should endure.  Still, all those fresh, delicious condiments that make a Fatburger our favorite burger chain offset the charcoal flavor somewhat.  Oh, and if you  aficionados of “that other California burger” are wondering, I’ll take a slightly overdone Fatburger to any In-N-Out burger any day!

This burgeoning franchise was once available only in California, but has expanded across the fruited plain into two Canadian provinces as well as Panama, China, Japan, The Philippines, the United Kingdom and throughout the Middle East.  With any luck, several more will be available in New Mexico someday.  Fatburger’s motto reads, “we’re not for everybody,” but they are for people who appreciate very good burgers.  By the way, Isleta’s Fatburger is the only one under spacious skies to offer green chile.  Take that, In-N-Out!