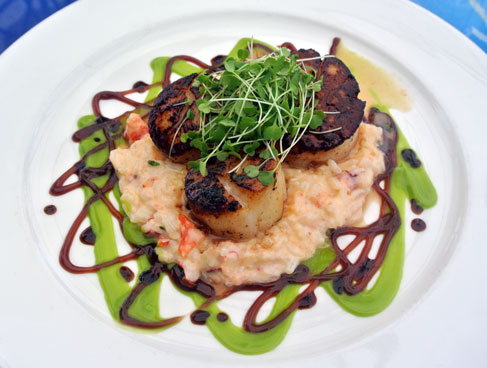 The walls at Geoffrey’s Malibu are festooned with copies of whimsical framed “doodles” created by Hollywood celebrities and movie stars who have dined at the posh seaside restaurant. Most are tongue-in-cheek self-portraits which probably speak volumes about the glitterati themselves–and not just whether they lack or are blessed with an artistic talent beyond their particular medium. Thematically, all the portraits include a heart. That’s because Harvey Baskin, the restaurant’s previous owner asked the artists to donate originals for publication and sale in support of a charity for children with heart disease.

Jane Russell’s heart forms her shapely derriere at the terminus of legs which would otherwise go on forever. George Burns’ bespectacled heart puffs on one of his beloved cigars. Tony Bennett may have left his heart in San Francisco, but at Geoffrey’s Malibu it reputedly spans the Brooklyn Bridge. Geoffrey’s neighbor Johnny Carson, obviously knowing his limitations, drew a simple heart and signed his name beneath it. Woody Allen was clearly in his trademark dispirited disposition when he drew a broken heart

The fact that guests can dine at Geoffrey’s Malibu and not even notice the celebrity caricatures is a testament to the spectacular beauty surrounding the cliff-side restaurant which overlooks the churning Pacific. In essence, Geoffrey’s is a curvilinear patio carved out of a Malibu hillside. There’s an actual restaurant beyond the patio, but most diners want to imbibe the breathtaking scenery while enveloped in idyllic marine weather. Virtually every table on the premises has unobstructed views of the ocean (unless it’s obfuscated by fog).

There’s much credence to the argument that the drive to Malibu is even more jaw-dropping than the destination, especially if your route takes you through the Santa Monica Mountains on Kanan Dume Road. Even while the precipitous, winding road demands caution, you’ll ogle rocky promontories, verdant vineyards on steep angular hillsides and palatial estates rivaling French palaces. You’ll drive through a series of double tunnels cut into the very rock itself. You’ll marvel at every turn.

While the trek to Geoffrey’s Malibu may call to mind Ralph Waldo Emerson’s quote “life is a journey, not a destination,” the destination itself is absolutely magnificent. Geoffrey’s is located mere feet from the Pacific Coast Highway which traverses the city affectionately nicknamed “the Bu” by locals. It may as well be miles away from the rest of civilization. Geoffrey’s has the preternatural ability to transport you away from your cares and toward a better self. It’s al fresco dining at its very finest, a venue to be shared with loved ones. While our oft-recalcitrant dachshund child Tim dined with us, our good friend Sandy couldn’t make it.

To ensure you’re not winded by a potentially long walk, you’ll definitely want to avail yourself of the valet parking services. Geoffrey’s parking lot belies its daily guest list; it’s not nearly big enough to accommodate the fleet of BMWs, Mercedes Benzes, Silver Phantoms and the like driven by guests. If you don’t want to witness the Jenga-like skill of the valets being played out on your vehicle, you can park instead on the shoulder of the Pacific Coast Highway. Some diners even park where signs indicate “No Parking.”

Seating is in personal space proximity and the crashing waves a hundred feet away don’t muffle conversations very well. It’s easy to distinguish locals from tourists. Tourists gawk at their surroundings with an awestruck reverence while locals schmooze with the wait staff, an amazingly attentive phalanx of servers at your beck and call. Geoffrey’s is known to be a magnet for the well-heeled: celebrities, politicians, executives and the like, some of whom brandish a copy of the day’s Wall Street Journal and deliberate the financial section.

Shortly after you’re seated and menus are gently placed in your anxious hands, a server uses silver tongs to extricate a single bread roll from its warm repository. Just out of the oven, it’s a rosemary foccacia from which wisps of steam escape when you cut into it. The steam is redolent of rosemary, just enough to be discernible. The foccacia is golden brown on the outside with just enough crust to hold in soft, tender and delicious innards. It’s served with butter that’s easy to spread.

While no menu could possibly match the venue with its million dollar per square foot views, Geoffrey’s menu will elicit a few oohs and aahs–and not just because of the price point. It’s an extravagant fine-dining menu even during lunchtime. Segmented like most menus–Appetizers, Soups and Salads, Salad Entrees and Lunch Entrees–it’s rather seafood centric, fitting considering the milieu. Just as many elements combine to create a classic restaurant, multifarious ingredients hallmarked by freshness, are needed to form an interesting and inviting menu. Geoffrey’s has done this.

Save for an artisan cheese plate and baked brie in puff pastry, every item on the eight item appetizer menu showcases fresh seafood. Sauteed Maine mussels are an outstanding option. The broth is amazing, an ambrosia of Nueske’s bacon, tomatoes, whole grain mustard and ale butter. If you’ve never had Nueske’s bacon, you’re in for a treat. Nueske’s bacon is applewood smoked perfection which might just spoil all other bacon for you. The salty smokiness permeates the broth and impregnates the briny mussels. Two slices of grilled bread are available for dredging the broth, but a spoon works just as well.

Nueske’s bacon finds its way into another entree, this one from the Salad Entrees section of the menu. The Maine Lobster Cobb Salad demonstrates the versatility of lobster which is equally delicious steamed and served with melted butter or served cold as in this Geoffrey’s masterpiece. A full pound (pre-cooked weight) lobster replete with knuckle and claw meat sits atop an otherwise standard Cobb salad with tomatoes, avocado, hard-boiled eggs, blue cheese crumbles and a lettuce mix drizzled with a honey Dijon vinaigrette. It’s a beautifully composed salad with elegant twists sure to please the most discerning diners.

Predictably, my entree featured two of my very favorite items-Maine lobster risotto and day boat scallops. The term “day boat” indicates boats harvesting the scallops return to shore to at the end of each day, rather than spending days at sea. It translates to much fresher, more delicious scallops. Three large sizes scallops are perfectly seasoned and prepared, seared on the outside and medium-rare on the inside. Characteristically sweet and thoroughly delicious, they exemplify freshness.

The lobster risotto is perfectly prepared. A basic risotto requires a round, short grain, high starch rice. From there, it’s a blank canvas for a wide variety of flavors, among them Maine lobster. To be honest, there wasn’t much lobster in the risotto, nor was there enough risotto for that matter, but then there never is for me. Geoffrey’s risotto is superb, but it was encircled in a pomegranate reduction that was perhaps too much of a flavor foil. The pomegranate reduction’s tangy-sweet profile didn’t complement the risotto very well; a savory or cheesy reduction would have worked better.

The dessert menu lists seven items including the same artisan cheese plate found on the appetizer menu. In a rare feat of willpower, I eschewed the warm brioche bread pudding with a bourbon sauce and opted instead for chocolate hazelnut crunch bars with creme Anglaise and strawberry coulis. It’s a very rich dessert showcasing a creamy wafer-like crust topped with a layer of even richer hazelnut (basically Nutella). The strawberry coulis provides a tangy-sweet contrast to the nutty, crunchy and cloying crunch bars.

Dining at Geoffrey’s Malibu is feasting with your eyes in every sense of the term. It’s one of the most amazing restaurants in California, a true pot of gold at the end of a truly spectacular rainbow.