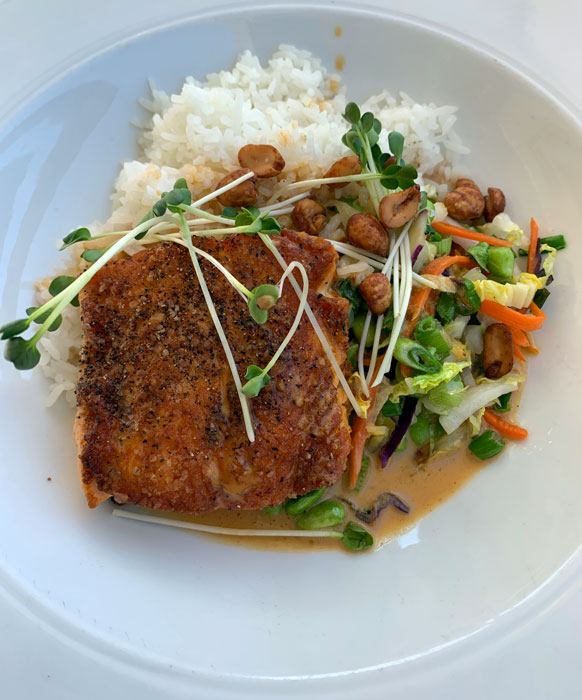 Hollywood’s movie studio system of the 1920s and 30s contractually required its greatest glitterati  to remain within 100 miles of Tinseltown’s studio during production. Because of this “two-hour rule,” such stars as Cary Grant, Debbie Reynolds, Frank Sinatra and his “Rat Pack” buddies traded Hollywood’s frenetic, paparazzi-plagued lifestyle for the more secluded and sedate pace of Palm Springs, exactly 100 miles from Hollywood.  This system of indenture is long gone, but A-list stars continue to flock to the high desert for a lifestyle suitable for the rich and famous.

Despite its reputation as a top getaway destination for Los Angeles luminaries, Palm Springs is not necessarily known as a top destination for foodies.  In 2014, for example, neither Palm Springs nor its Coachella Valley were ranked among seventeen great destinations for foodies in California.  Three years later, they weren’t ranked on a list of the 29 “best foodie cities in California.”  Even such less well-known cities as Rancho Cucamonga, Modesto and Bakersfield made the list.  It certainly made me wonder what they have that Palm Springs doesn’t have.

Maybe, I wondered, Palm Springs is perceived as living in its glorious past, celebrating the storied eateries frequented by the stars of yesteryear.  Indeed, many of those restaurants remain as popular today as when they were during the halcyon days of the Hollywood movie studio system.  Among those legendary A-lister favorites areMelvyn’s, a hangout for the rambunctious Rat Pack and the iconic Sherman’s Deli where Elvis Presley and his “Memphis Mafia” would reportedly commandeer the entire restaurant for a hot pastrami sandwich fix.

Contrary to the perceptions of the aforementioned pundits, the more research I did, the more it became obvious the Valley’s dining scene is one to be reckoned with.  Sure, it embraces its classic (but don’t dare call them anachronisms) restaurants, but the valley’s restaurateurs have a 20/20 eye toward the future.  Eater Los Angeles describes it best: “Desert die-hards know that Palm Springs possesses a timeless allure, with a food scene that’s been on the rise for years to boot.”  Maybe someday it’ll be recognized as one of California’s premier year-round dining destinations.

Given its proximity to fresh fruits and produce, it’s a given the Coachella would offer exemplary farm-to-table fare.  Also to be expected is dining alfresco under a star-studded desert night sky at the base of the craggy San Jacinto Mountains.  So are supper clubs, food, wine and craft beer festivals.  What the Coachella Valley offers that only New Orleans and a few other select cultural-culinary destinations can match is the Coachella Valley Music and Arts Festival, a week-long event where stellar restaurants from throughout the fruited plain set up shop in innovative pop-up fashion.  What about the rest of the year, you ask.

In the scant two weeks we’ve spent in the resurgent Coachella Valley we’ve uncovered a treasure trove of inspired and adventurous restaurants competitive with those of any city in which we’ve dined.  Vibrant menus executed magnificently in spectacular milieus by innovative chefs have elevated our esteem for one of our very favorite escapes from winter’s frosty bite.  More important for us, many of the restaurants we’ve discovered allow us to dine with our debonair dachshund The Dude.  In fact, nearly a hundred restaurants in the Coachella Valley are dog-friendly.

Among them is AC3 Restaurant + Bar in Palm Desert which earned coveted “Best New Restaurant” honors in The Desert Sun’s “Best of the Valley” competition.  AC3 is ensconced on the first floor of the Hotel Paseo, the first new luxury hotel in Palm Desert in more than thirty years. This boutique property is steps from upscale shopping, art galleries, restaurants, and nightlife on El Paseo, known as “The Rodeo Drive of the Desert.”  Hotel Paseo centralized location makes it an ideal jumping off point for exploring the beautiful Valley.  First, however, you’ve got to explore AC3.

AC3 Restaurant + Bar is a collaboration of two of the valley’s best restaurants, Trio Restaurant and Copley’s On Palm Canyon, the latter housed in in part of the former Cary Grant estate.  Award-winning Chef-Owner Andrew Copley created a “New American” dining experience highlighting familiar dishes using local ingredients.  Within six months of launching, the AC3 team was showcasing those ingredients while serving two courses at the James Beard House in New York City.  It’s not likely that’ll be the only time AC3 is mentioned in the same sentence as James Beard.

AC3 offers distinct and distinctive menus for breakfast, lunch and dinner in addition to a value-priced prix fixe menu from 3:30PM to 5:30PM.  A “weekender” brunch menu is among the best in the Valley while happy hour “bar bites” let you pair a dazzling array of small and full plates with your favorite adult beverage.  Many of the restaurant’s appetizers and entrees can be modified for gluten-free considerations.  Bread service is available upon request.  A 63-degree day with 10mph winds ensured we had the capacious patio all to ourselves though it seemed most of the kitchen and hotel staff stepped outside to ogle The Dude.

When my Kim sees lobster on a menu, she likes to quip “it’s my lobster,” a paraphrase of a popular quote from the 1990s situation comedy Friends.  In one episode Phoebe exclaimed “see, he’s her lobster” after Rachel and Ross finally got together.  AC3’s Lobster Cobb (baby iceberg, apple smoked bacon, roasted corn, tiny tomatoes,Chèvre, and egg drizzled with an avocado and cilantro dressing) was indeed my Kim’s lobster.  Thankfully she shared this elevated Cobb salad with me.  Talk about a generously portioned compilation of great ingredients, all of which went well together.  We hadn’t seen so much sweet, succulent, glorious lobster in quite a while and were especially surprised at how well the delicate lobster meat paired with the pungent Chèvre (goat cheese).  Similarly, the avocado and cilantro dressing provided complementary-contrasting notes which brought everything else together.  Most artistic were the sliced baby tomatoes in shades of red, orange and yellow, each with slightly different flavor notes.

Lobster is also a prominent ingredient on the Braised Sweetcorn and Fennel Broth.  Though normally served cold, we asked the kitchen if it could be served warm in consideration of the cold (at least for Palm Springs) weather.  Although it’s possible to heat any soup, it won’t necessarily be good (hot gazpacho, for example).  This one was!  In fact, it was one of those soups which might just make you close your eyes and luxuriate in its deliciousness.  The flavor of sweet corn is prominent in the way corn is naturally sweet manner, not corn which has been sweetened.  Fennel lends only a hint of its sweet, aromatic, anise-like flavor and there’s just enough Balsamic glaze to be discernible.  Small chunks of sweet, red-pink lobster swim below the surface of the succulent amber broth.  This is a superb soup!

Our server told us the grilled salmon bowl (coconut rice, cabbage, carrots, edamame, green onions, micro-greens, red Thai curry, candied peanuts) is the most popular dish on the lunch menu.  It’s easy to see why.  Picture a lightly encrusted six-ounce salmon filet grilled so it has a slightly “burnt” flavor.  Grilling induces the salmon’s “good” fat to ingratiate itself into the other ingredients on the plate, coalescing them into a delicious whole.  Puncture the salmon with your fork and you’ll extricate flaky, tender white fish with a mild flavor which picks up just enough of the Thai curry to influence, but not change its flavor profile. It’s an excellent way to enjoy the versatility and deliciousness of one of the most popular fish in the world.

Not since the Beatles has this “side of the pond” embraced anything with such affection as colonists have embraced fish and chips which have become a rather de rigueur restaurant offering across the fruited plain.  You no longer need to find a British or Irish-themed restaurant to enjoy them.  Fish and chips are on the menu of every type of restaurant–from elegant fine-dining to simple mom-and-pop.  AC3 offers blonde ale battered fish n’ chips served with malt pickled onions, house seasoned fries and tartar sauce.  A single, lightly-breaded, golden-hued plank of flaky, delicate fish is all fish without any of the residual “fishy” flavor.  It’s a perfect vehicle for malt vinegar as are the seasoned battered fries.

AC3’s dessert menu is a continuum of the same high-quality deliciousness as the rest of your meal, a perfect progression of one truly mouth-watering dish to another.  Innovations such as S’Mores (flourless chocolate tart, burnt marshmallow ice cream, Graham cracker and cocoa nibs) served on a wooden plate are an elevation of the S’Mores you enjoyed as a child, a more sophisticated adult version.  The flourless chocolate tart is dense and sweet, the marshmallow fluffy and light.  Though not listed with other ingredients, the fresh berries lend a nice contrast.  You probably won’t relive childhood experiences around a campfire, but you’ll create new experiences enjoying the grown-up version of a timeless dessert.

With restaurants such as AC3, the future of Coachella Valley’s restaurant scene has a bright and promising future.