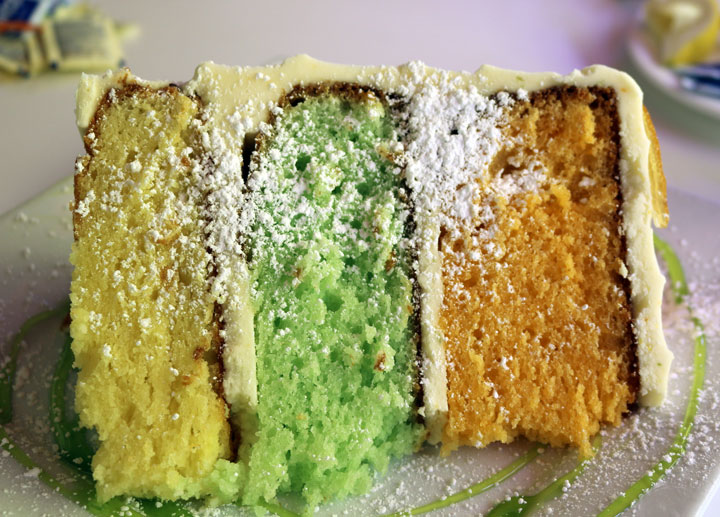 “On one hand,” my Kim tells me, “you’d make a great politician.” “You maintain a perfect deadpan expression while telling the biggest whoppers.” She had just watched me convince a gullible millennial (okay, she was your stereotypical California blonde valley girl) that the Jeff Bridges character in the movie The Big Lebowski was named for our debonair dachshund The Dude. Never mind that our Dude was born sixteen years after the 1998 comedy hit. “On the other hand,” she corrected herself, “you’re much too honest to ever run for office.” Only a few people, my Kim being one of them, can recognize when I’m using my “gift” of mirthful mendacity. It’s a gift I employ only to lighten the mood, not to exploit gullibility.

We were standing in line in front of Jake’s, one of the most famous and popular restaurants in Palm Springs, when the opportunity for my duplicitous act presented itself. The Dude, as usual, was the center of attention. Virtually everyone in line with us stopped to coo at our little boy, commenting on how soft his fur is and what a handsome (he takes after his dad), well-behaved little guy he is. Of course, everyone wanted to know what our paragon of puppyhood (or is it puppyness) was named. They all concurred that “The Dude” name fits very well.

It was fitting that my canine caper transpired at Jake’s, a classic American bistro named for a West Highland Terrier who crossed the rainbow bridge in February, 2016, a month before we lost our beloved Tim. Regulars with whom we made small talk told us all about Jake, a peripatetic and much loved presence at the restaurant named for him. If it’s possible for the spirit of a dearly departed dog to infuse a locale he loved, you could certainly feel Jake’s presence. That’s especially true near the restroom where walls are festooned with his smiling countenance.

Smiles come with the territory when you dine at Jake’s which has been recognized as one of the top “100 Best Al Fresco Dining Restaurants in America,” and by eater.com as “one of the top seventeen Palm Springs restaurants for 2017.” More importantly, it earned a perfect five bones rating from BringFido, the trusted online dog travel directory. “Bone apetit” commented several reviewers. Aside from its dog-friendly ambiance, Jake’s is renowned for its amiable servers, decadent desserts and for its weekend brunch. The brunch menu is wholly unlike the seemingly standard brunch template of pancakes, omelets and similar fare. The Christmas Eve brunch had some of those, but it also had some of the most tempting sandwiches and salads we’ve seen.

24 December 2017: As usual, my Kim ordered a sandwich superior to the one I ordered–a hangar steak and eggs sandwich, a stellar lunch meets breakfast which exemplifies why brunch is so beloved. A ciabatta roll is the canvas for one of the most delicious breakfast sandwiches we’ve ever had, a sandwich which will kick any McMuffin in the teeth. Picture two eggs over medium, sliced hangar steak prepared at about medium, Gorgonzola cheese, pico de gallo, avocado slices and chipotle aioli. My Kim tells me I pay more attention to the nuanced elements of the most complicated sandwiches than to their star ingredients. In this case, my attention (and affection) centered on the chipotle aioli, a smoky, piquant smear that made this sandwich coalesce into a delicious whole, not jumble of ingredients. Sure, the hangar steak was as tender as the murmur of a spring drizzle (and would make wondrous fajitas), but that aioli made it.

24 December 2017: Take the term “great” and multiply it by an infinite order of magnitude and you’ve got the citrus cake, an incomparable brick-sized slab of absolute deliciousness my Kim described as the “best cake ever!” As our server toted it over to our table, she attributed the size of his formidable, rock-hard “guns” (seething with jealousy here) to having to carry such weighty desserts all day. Size was far from its most definable quality. This colorful beauty is three layers of fresh, natural citrus flavors demarcated by a date buttercream frosting. Each layer of citrus–sweet Meyer lemon, tangy lemon and bright orange–is replete with the flavors of freshly picked citrus fruits, not some artificial flavor. We thought there would be no way we could finish it all, but finish it all we did…and we’d do it all over again.

24 December 2018:  Al fresco dining in beautiful Palm Springs, especially at Jake’s and especially in December is a Christmas gift tradition my Kim and I have embraced now for two consecutive years.  From the patio we look out at palm trees on North Palm Canyon Drive.  In the distance we marvel at the denuded mountains, as craggy and ominous as a wrinkled old curmudgeon. I suspect my Kim is also sneaking a peak or two at the servers with the big guns.  At some point we ogle the menu, an inspired array of sandwiches, salads, soups and specials.  It’s always a challenge to decide what we’re going to have.

Though most of the sandwiches come with a small and simple side salad, larger, more inventive salads will command your rapt attention.  The Grilled Pineapple, Watermelon and Chicken Salad (feta cheese, mixed greens, carrots, cherry tomatoes, lemon vinaigrette, Balsamic drizzle) is absolutely amazing, a showcase of California fresh ingredients in entree-sized portions.  Grilling the watermelon and pineapple until their sugars caramelize and dark char lines appear may forever change the way we think about these summer fruits.  The end result is sweeter, more dessert-like fruits than in their raw state.  Counterbalancing the sweet notes is the salty, pungent feta.  The lemon vinaigrette with its tart profile plays well against the sweet elements, too.  This is a  spectacular summer salad.

24 December 2018:  Perusing Jake’s sandwich menu is an especially difficult challenge for me because every single sandwich is constructed with high-quality ingredients that go together like unicorns and rainbows or coffee and me.  Ingredient combinations are typically inventive, obviously crafted by someone with a better imagination than me, someone who knows how to put those ingredients together to maximize flavors and make contrasting and complementary ingredients play off one another in ways most of us couldn’t conceive.

Take for example the Italian Sausage Reuben (hot Italian sausage, sauerkraut, melted Swiss cheese, 1000 Island dressing, all grilled on light rye bread).   Most of us have had Reubens constructed with corned beef and pastrami.  Some might even consider it heretical to use anything other than either of those two meats.  The only departure from tradition some diehards will entertain is Thousand Island dressing instead of Russian dressing.  Jake’s use of hot Italian sausage is such a radical concept I just had to try it.  Not surprisingly, it worked!  So well, in fact, it has prompted my own desire to try creating a Reuben with other meats (Spam, anyone?)  If only we could hope to duplicate the magic in Jake’s Thousand Island dressing or the distinctive tartness of its sauerkraut.

24 December 2018:  As has oft been chronicled in my missives, my Kim isn’t quite as open to experimentation with food as is her mad scientist of a husband.  For her, a turkey sandwich with the usual ho-hum ingredients of turkey, mayo and tryptophan are good enough.  To be honest, I half expected her to ask our server to remove some of the ingredients with which Jake’s turkey sandwich (fresh roasted turkey breast, melted Cheddar cheese, cranberry relish, chipotle aioli grilled on nine-grain bread) is constructed.  Thank goodness she didn’t.

Quite simply, this was of the very best turkey sandwiches we’ve ever had, much, much, much better than turkey sandwiches made with cranberry sauce and stuffing (talk about a tryptophan overdose). Jake’s turkey sandwich is a magnificent melange of flavors, starting with thick turkey breast slices brought to life with a superb cranberry relish and further invigorated with chipotle aioli.  Then there’s the nine-grain bread, perfectly toasted and buttery.  Thankfully my Kim let me have several bites of this sandwich masterpiece.  I think I’ll keep her.

24 December 2018: The two most prominent factors in our decision to vacation in Palm Springs for the second consecutive year were the weather and the citrus cake, not necessarily in that order.  Within ten seconds after being greeted by our server, we asked him to hold a piece of the citrus cake for us and keep it under locked guard to prevent another server from giving it to someone else.  Tragically (yes, tragically), the pastry chef hadn’t baked a citrus cake, but he had baked “one third” of our beloved citrus cake–an orange blossom cake.

Jake’s doesn’t believe in small slices.  Every one of the three layers, punctuated by a thick dividing line of divine date buttercream frosting  is a mouthful of delight-inspiring deliciousness.  The cake is flecked with pieces of candied orange peel tasting a bit like candy orange slices of yore.  They lend even more citrus dimensions to a very moist, very orangey cake so good we couldn’t even justify that Jake’s didn’t have the citrus cake we traveled some 800 miles for.

Jake’s lives up to its billing. It’s truly one of the very best restaurants in Palm Springs, but how could it not be. It’s not just a dog-friendly restaurant. It’s a restaurant named for a four-legged family member. Those tend to be the best!