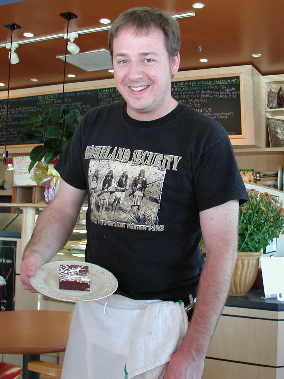 In the summer of 2000, prominent artists throughout the Southwest resoundingly answered the call to submit their design ideas for painting on an unconventional medium–a horse cast in a durable resin blend.

This particular canvas was chosen to commemorate the introduction to North America of the horse. More than five centuries ago, Spanish Conquistadores explored New Mexico astride the noble beast.

The painted ponies were intended to promote artistic excellence and for about a year, the “trail of painted ponies” led art aficionados to various galleries throughout the state where the equine masterpieces were on display. In the fall of 2001, the ponies were sold and garnered over half a million dollars for altruistic causes.

Fast forward to March, 2006 when culinary pioneers Debbie and Jud Lewis-Mahon, blazed their own trail on painted ponies of their own, albeit gleaming metal steeds with considerably more horsepower than the Conquistadores’ horses.

That’s when they launched the Painted Horse Coffeehouse in the Paseo del Norte Shopping Center on Albuquerque’s far Northwest corner. Like the Spanish explorers, the Lewis-Mahons have had to surmount vast expanses of wasteland–in this case, a plethora of chain restaurant mediocrity. The Painted Horse Coffeehouse is a rarity in this part of the Duke City, a true mom and pop restaurant.

The Painted Horse occupies the space once held by the Gourmet Bagel and Coffee Co. and has actually captured many of its predecessor’s loyal patrons…and not solely because they sell fourteen varieties of bagels. Initially the bagels were acquired from Wolfe’s Bagels, a locally owned, family operated favorite, but now they are made in-house and are just as good, if not better.

Despite its shopping center storefront facade, the Painted Horse isn’t your conventional humdrum coffeehouse. It has a distinct upscale avant garde feel to it, a sort of neighborly Santa Fe type place in which you can kick back in comfort, bask in the morning sunlight and imbibe the aromas of steaming coffee and delectable pastries. Bistro tables and comfy chairs beckon.

Operating hours are also somewhat unconventional for a coffee house. Dinner hours vary by day, but most nine-to-fivers on the West side should be able to make it to the Painted Horse for dinner Monday through Saturday. Don’t miss out on the monthly slam (a form of performance poetry that occurs within a competitive poetry event) and open mike event held the third Friday of every month at 6PM.

Eclectic art–whether it’s watercolor paintings of age-worn Northern New Mexico casitas or smiling gargoyles–will catch your attention, but what will hold it are the pastries under a glass case. This is dessert art at its most appetizing, a bevy of calorie laden confections crafted in-house by Jud himself, the visionary instrumental in developing many of the restaurant’s offerings in addition to baking all breads, pastries and desserts.

The menu, scrawled in different colors on a chalkboard high above the ordering counter, is a veritable treasure trove of chic panini sandwiches, wondrous pastries, exotic coffees, Italian sodas, a salubrious and savory soup of the day and much more. The breakfast menu features the aforementioned bagels and New Mexico’s ubiquitous breakfast burritos.

Gourmet panini sandwiches begin with substantial slices of artisan breads which are engorged with fresh vegetables, meats and condiments. You’ll be challenged to make a selection from among the inventive toasted and non-toasted sandwich choices on the menu.

You can’t go wrong with the Chipotle Chicken sandwich served cold. It features a thinly sliced, unbreaded chicken breast festooned with a sweet chipotle mayo, a sweet and buttery havarti cheese, lettuce and tomato on soft focaccia bread. The melding of ingredients is both creative and delicious.

The menu also includes New Orleans’ favorite sandwich, the muffaletta. In reality, it’s more akin to a fancy ham sandwich in that it features thinly sliced ham, provolone cheese and a Balsamic pesto spread. If you’re a stickler for authenticity, this sandwich won’t provide it, but if a great tasting sandwich is what you’re after, this one will fit the bill.

A steaming bowl of the soup of the day will warm the cockles of your heart and make you ready to face the most daunting of New Mexico winter days. The Painted Horse’s flavorful Sherry Onion Soup may be the most subtle French onion soup I’ve ever sampled in that it isn’t dominated by saltiness. You can really discern the individual tastes of savory beef broth, sweet caramelized onions and melted cheese.

If you manage to bypass the Meryl apple pie, the dessert case is bound to have your favorite pastry dessert, whatever it might be. A popular favorite is the bumbleberry pie.

Since there’s no such thing as a bumbleberry, pastry chefs typically use in-season berries. The Painted Horse’s version, during a December visit was made with blueberries, blackberries and raspberries. It showcased the delicious tanginess of three distinct berries in a flaky crust.

New Mexicans might opt for the piñon brownie which features one of the state’s best natural treasures–piñon. This is a rich dark chocolate brownie drizzled with white chocolate glaze and replete with delicious crunchiness. It’s so good you might not want to share it. Nor will you want to give up any of the bourbon pecan pie, as good as any you’ll find in the deep South.

Maxwell House had it all wrong. The best part of getting up isn’t a steamy cup of coffee, it’s an outstanding breakfast burrito served Christmas style (both red and green chile), especially if the person taking your order is co-owner Debbie (she of the luminous smile and effervescent personality).

The Painted Horse’s version of the quintessential New Mexico breakfast entree is wonderful. Moreover, it’s a testament to the talent of the owners who certainly didn’t grow up eating chile in Vancouver. They’re now as addicted to chile as any native and prepare it as well, too.

That breakfast burrito can be had smothered in either red or green (or both) or as a hand-held burrito. It is engorged with home fries, bacon and eggs.

The “Big Breakfast” is aptly named–home fries, two eggs, two pieces of bacon, a bagel or your choice of toasted bread and tomato slices. The home fries are crispy on the outside and tender inside, the antithesis of similar offerings at other restaurants.

If you start out your mornings craving something sweet, the answer to your yen is the Painted Horse’s French toast crafted from homemade Challah bread lightly dusted with cinnamon and sugar. This is tree thick slices of utter deliciousness, some of the best French toast in the city.

For smaller breakfast fare, you can’t go wrong with the Painted Horse bagels–fourteen varieties in all, ranging from chocolate to garlic to green chile and so much more. These bagels are chewy and dense with a doughy interior and perfectly browned exterior. You can have them toasted or untoasted and with butter, peanut butter or cream cheese (four housemade varieties, including green chile).

In 2006 the McDonald’s Corporation honored Herb Peterson with a Lifetime Achievement Award for his creation of the Egg McMuffin, McDonald’s popular breakfast sandwich. The Egg McMuffin consists of a slice of Canadian bacon, a grill-cooked egg and a slice of cheese on a buttered, toasted English muffin. A sausage patty may also be selected in place of the Canadian bacon.

The Painted Horse Coffeehouse has its own breakfast sandwich that rivals (and may even exceed) the heralded Egg McMuffin in terms of flavor. This rendition consists of any bagel (try the green chile bagel) with a savory scrambled egg, Cheddar cheese and crispy bacon. It is a delicious waker-upper. Even better, try this sandwich on a buttery croissant.

The Painted Horse is a horse of a different color from all the tired, mangy corporate chain nags on the Northwest side. It’s streamlined and built for comfort and deliciousness! It’s the type of restaurant Albuquerque patrons should muster all their horsepower to get to soon and often.