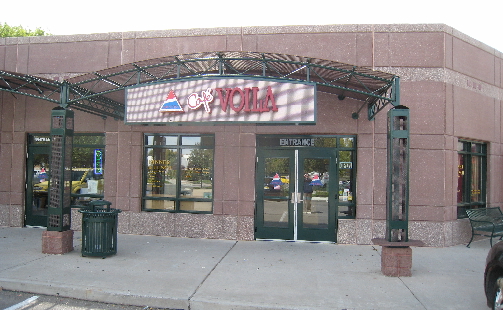 Mon ami Francophile who spends months vacationing in France likes to talk about his dining experiences in the land of haute cuisine and haughty waiters, regaling anyone who will listen with tales of surliness, scorn and condescension the likes of which Americans are unused to.

His favorite tales of woe involve a churlish waiter at a sidewalk cafe in Paris adept at ignoring customers to the full extent of their patience then tossing menus at them. When taking their order, he will roll his eyes and tap his pencil on the menu as if aggravated that his valuable time is being wasted.

Leaving the table, he will swing the menu around and hit at least one customer on the head (an eye on a good day). Invariably he will deliver the wrong entrees and blame the mistake on the patron’s horrendous French pronunciation of simple dishes.

My Francophile friend (whom I suspect has more than a little mean streak) sees such surliness as part of the charm of the stereotypical French waiter. He says they’re in a hurry and if you leave in a dither, someone else will take your place who won’t be so sensitive about “a little” abruptness.

The service at Cafe Voila in Albuquerque’s Journal center is completely antithetical to the much maligned maliciousness of the stereotypical French waiter. At Cafe Voila you’ll be treated with the utmost of courtesy by a wait staff whose very mission seems to be making your dining experience a memorable and enjoyable one.

That’s probably because the wait staff reflects the high professional standards of youthful owner Brent Rochford (pictured at left). In 2007 Rochford assumed ownership of Cafe Voila, taking the reins from his parents Christian and Debbie Tournier who opened the restaurant in 2003.

Rochford’s experience belies his youth. He has worked in all aspects of the restaurant business for years, progressing from dishwasher to waiting on customers to serving as host. Eventually he headed the entire staff, imparting his flair for personable, attentive service.

Cafe Voila is ensconced in a Journal Center retail area which is bustling during the eight to five hours but becomes a veritable ghost town thereafter. Think of Cafe Voila as an oasis of tranquility amid Albuquerque’s bustling traditional well-beaten, well-eatin’ path. As such, it has become a destination restaurant–patrons have Cafe Voila in mind when they turn onto Jefferson.

Being off that well trodden path does have its disadvantages, one being that if you’re on one of those restaurant rich Albuquerque streets (such as Montgomery or Menaul), you just might not take a few extra minutes to visit the more staid Jefferson.

Over the years Cafe Voila has adjusted its operating hours in response to customer traffic. Breakfast is no longer served, a true tragedy considering the restaurant offered probably the very best French toast in Albuquerque as well as buttery, flaky and delicious croissants and assorted French pastries all baked in-house. Similarly, a terrific Sunday brunch was short-lived.

In terms of ambience, think intimate and relaxing. Think great place to get away from it all. The restaurant is modestly appointed with pastel artwork and muted colors. There is nothing to distract you from your dining experience.

Even better, weather permitting, is the south-facing patio where you can enjoy a repast under umbrella tables with a view of the rolling tree-studded, green lawn.

From the onset, the emphasis at Cafe Voila has been on authenticity and quality featuring French country cooking brimming with fresh ingredients and an abundance of vegetables. Plating is an art form while portions are generous, reasonably priced and delicious.

The menu offers something for every appetite and while French dishes are featured fare, you’ll also find several Italian entrees including Fettuccini Carbonara and lasagna as good as anywhere in Albuquerque.

Lighter fare includes a nice selection of salads, crepes, quiches, soups and four sandwiches which are available only during lunch hours.

Salads are creative and unfailingly fresh. Cafe Voila’s rendition of the Chef Salad, for example, is made with mixed greens, blue cheese crumbles, walnuts, apples, celery and croutons served with a simple dressing made from wine vinegar, mayonnaise and Dijon mustard.

This is an excellent salad presenting a variety of flavor combinations–from the tartness of the apple slices to the fetid flavor of the blue cheese. The dressing is subtle and light, serving more in complementary fashion than taking over as some dressings are apt to do.

Lest I forget, Cafe Voila bakes some of the very best bread in town. It is hard-crusted, airy French bread served with creamy French butter. Diet be damned, you’ve got to have a few slices of the staff of life with your every meal at Cafe Voila. The bread, like the restaurant’s fabulous French pastries and desserts are all baked in-house. Treat yourself to crème brulee, profiteroles, fruit tarts and more.

You can’t go wrong with any of the menu’s sandwiches, all of which offer a uniquely French country cooking experience. If you’ve ever been to a hypermarket, say at Calais or Boulogne (across the Straits of Dover), you know that a sandwich doesn’t need to include a trove of ingredients to be delicious.

The Le Champs Elysées–Salami, Butter and Cornichons on a baguette is such a sandwich. It is simplicity defined, but the ingredients go so well together that your taste buds won’t have to discern complicated flavor combinations. They’ll just relax and let the simple flavors sing.

The sandwiches at Cafe Voila remind me of my visits to France’s hypermarkets where we loaded up on French bread, cheese, butter, salami and wine and enjoyed some of the very best meals of my years in Europe.

One of the hallmarks of French country cooking is that its basis is not in complicated techniques or exotic ingredients, but in bringing out the satisfying tastes and textures of fresh, in-season vegetables. Cafe Voila does just that.

Fresh spring peas cooked with white onion at Cafe Voila are almost ethereal in their flavor. If it’s possible for freshness to have a flavor, these peas epitomize that flavor. Vegetables might not be the highlight of your meal, but they’ll never be something you discard entirely as at other restaurants. In combination with the restaurant’s potatoes au gratin and baked cod topped with diced sweet tomatoes and delicate capers, this is a first-class meal–one of the very best French meals we’ve had in Albuquerque.

Whether it be sauces or soups, meats, fowl or fish that adorn your plate and tantalize your palate, the verdict at Cafe Voila is always C’est Magnifique.