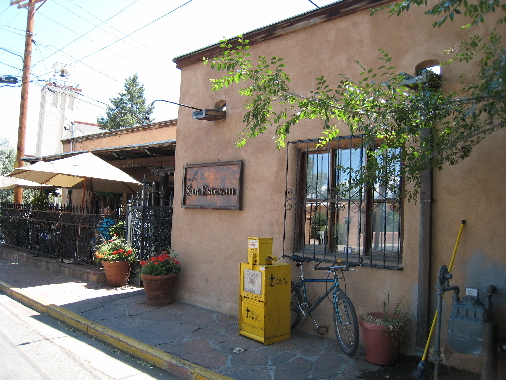 Spanish explorers and the sandal-shod sons of Saint Francis of Assisi who accompanied them planted the seeds of Catholicism by evangelizing to a large population of native Americans and to other colonists who migrated to the new country. The seeds they planted took root and have flourished for more than 400 years.

Today, despite he incursion of contemporary secularism, Santa Fe remains the “City of Holy Faith” established by Peralta. It is the seat of the Archdiocese of Santa Fe which counts among its faithful, more than 300,000 Roman Catholics.

The Archdiocese of Santa Fe covers an area of more than 60,000 square miles and includes 216 active missions and 91 parish seats, including Our Lady of Guadalupe in Santa Fe.

Our Lady of Guadalupe was built in 1961 and is adjacent to the venerable Santuario de Guadalupe which was founded in 1795. Though no longer an active parish, the Santuario remains a viable symbol of the Catholic heritage in Santa Fe.

Built of adobe in the local style of the eighteenth century, the Santuario and its cruciform structure remain largely intact despite the ravages of time.

Today, the Santuario houses the Archdiocese’s collection of New Mexican santos (carved images of the saints) as well as Italian Renaissance and Mexican Baroque paintings, many of which are priceless.

Literally at the shadow of the Santuario in a building once owned by the church is Cafe San Estevan, perhaps appropriately owned and operated by a Franciscan monk with a passion for saints.

Estevan Garcia’s other passion is cooking, a passion he developed while cooking for friars.

The New Mexican dishes he prepares are inspired by San Pasqual, patron saint of Mexican and New Mexican kitchens. Divine inspiration is very much in evidence and not only in the chef’s wonderful culinary creations.

From its Spanish iconography to the religious art festooning its thick adobe walls, spirituality has been incorporated into every facet of the restaurant.

Several santos adorn the flat stone fireplace on the southeast corner of the main dining room while a mural depicting several perspectives of what appears to be a guardian angel watching over a charge are the focus of a smaller dining room.

The restaurant’s architecture is artsy, too, in a New Mexico sort of way with exposed vigas on the ceiling, latillas dividing a half wall, notched beams and immaculate white adobe walls. Woven tapestries and chile ristras also adorn the Southwest hacienda style restaurant. Though some of these features can be found in other New Mexican restaurants, Cafe San Estevan seems to do them with more class.

Successful restaurants are in Garcia’s pedigree. In the early 1990s, he operated Ste. Estephe, a popular restaurant in Manhattan Beach, California which specialized in modern Southwestern cuisine. Ste. Estephe was a favorite of Gourmet magazine editor Ruth Reichl.

Wanting to return to his New Mexican roots and work with beans and chile and other native staples with which he grew up, Garcia launched Cafe San Estavan in 1996. He is avid about supporting local shepherds and farmers and uses many organic ingredients bought locally. His is a ubiquitous presence at Farmers’ Markets.

Garcia is meticulous about the preparation of each meal, taking extra care to ensure flavorful red and green chile that won’t singe the tongues of unenculturated diners. His chile is dried in the fields, not on a conveyer–a real difference maker. His pinto beans are grown in a farm in Chimayo. The succulent lamb on the menu was raised on the verdant grasses of Tierra Amarilla.

Though he doesn’t stray far from traditional New Mexican cuisine, French influences and innovations are in evidence. Little wonder Hispanic magazine named Cafe San Estevan one of America’s Top 50 Hispanic restaurants in 2003 and 2004. Though I don’t always agree with the magazine’s selections, this one can’t be argued with.

As might be expected, service is attentive and efficient. The wait staff seems to anticipate your needs and is on-hand with beverage refills just as you need them (an indictment of the dry New Mexico air, not necessarily the chile).

The menu (which depicts a herald angel on a cloud) is broken into three sections: apertivos (appetizers), ensaladas (salads) and la cena (the meal). An abbreviated menu featuring some items not otherwise served daily is available for Sunday brunch.

There’s also Estevan’s divinely inspired salsa served with warm tortilla chips. The salsa is only medium hot (piquant), but it is thick, chunky and very flavorful, among the very best in Santa Fe.

One thing we appreciate about Cafe San Estevan is its meticulous attention to the little things, those things that ultimately make a difference and set one restaurant apart over another.

Touches such as serving your meals steaming hot instead of lukewarm (or worse, cool) really do make an impression. Wouldn’t you rather have to blow on your food than complain about it being warm in places and cool in others? At Cafe San Estevan, your entire plate is served hot to the touch.

The first entree listed on La Cena is the Enchilada de la Casa De San Estevan, but if you’re thinking “it’s just another enchilada,” you’re in for a treat. Estevan’s enchiladas are special–two corn tortillas filled with your choice of chicken or beef, red or green chile (or both) and for a mere pittance more, blue corn tortillas and (or) a fried egg.

Though medium (at least for fire-eaters) on the piquant scale, both the red and green chile are redolent with flavor and the beef is seasoned to perfection. Cheddar cheese drapes over the enchiladas and the Chimayo pinto beans. Many native New Mexicans prior to my generation boast of having eaten beans for breakfast, lunch and dinner. You would brag, too, if you could eat these praise-worthy beans every day.

Estevan “one-ups” the traditional brunch combination of steak and eggs by serving a perfectly seasoned, tender six-ounce ribeye steak with calabasitas (a cornucopia of squash, corn and onions) and a cheese enchilada topped with chile caribe, a chile preparation style practiced for hundreds of years in Northern New Mexico. There’s no doubt Estevan is well-practiced in the culinary art of preparing this delicious red chile.

Evening specials tend to showcase Estevan’s creative side, but if your preference is for New Mexican cuisine, maybe you’ll luck out and the restaurant will be offering another terrific combination platter.

That combination platter (pictured), as during my second visit to Cafe San Estevan, featured a beef enchilada, a pork chop, tamale and the aforementioned calabasitas.

While every item on this particular combination is absolutely wonderful, I’m convinced that Cafe San Estevan serves one of the four or five best enchilada dishes in the state–especially when served “Christmas style” with both red and green chile.

At Cafe San Estevan, even the sopaipillas are more cloud-like and fluffy. They’re also thicker than most sopaipillas and won’t crumble apart like some others.

While sopaipillas generally suffice for dessert, you’ve got to order one of Estevan’s sweet creations. The organic goat’s milk flan is a popular choice and for good reason. It is rich and sweet with a touch of creaminess that distinguishes goat’s milk from the rest.

I’ve never been a fan of flan, but Estevan’s has made a convert out of me. The caramel sauce has none of the cloying qualities of the caramel you might heap on ice cream. It’s an adult, semi-sweet caramel that complements the flan like a marriage made in heaven.

After a meal at Cafe San Estevan, you might just want to cross the street to Our Lady of Guadalupe and give thanks for your bounty of some of Santa Fe’s most divinely inspired New Mexican food.