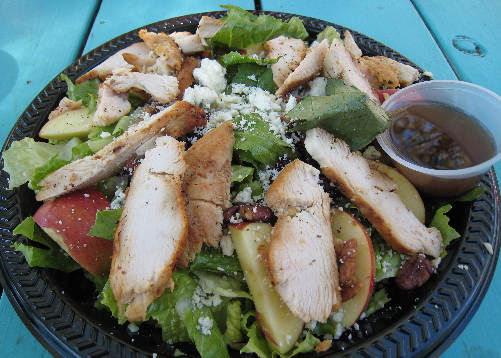 New Mexico is a dichotomous land, a land which welcomes contrast and diversity, where the state-of-the-art trappings of modern society are juxtaposed against ancient cultures with traditions that have gone largely unchanged for centuries. It’s a land in which the sophisticated and the rustic are equally at home.

It’s a land in which the best New Mexican cuisine might just be found in Cuba (that would be El Bruno and the best Cuban food could well be the one served in Madrid’s Tocororo Cafe.

Cuban food in Madrid, you ask. Many people assume (incorrectly) that there are only two restaurants in Madrid–the Mine Shaft Tavern and Maggie’s Main Street Diner, a storefront prop built for the movie “Wild Hogs” and its all-star cast of John Travolta, William H. Macy, Tim Allen, Ray Liotta and Martin Lawrence.

You know what has been said about assuming. In this case, an incorrect assumption means missing out on two fabulous cafes: Mama Lisa’s Ghost Town Kitchen and the Tocororo Cafe which has been blowing patrons away since it opened in 2006.

The restaurant is named for the tocororo, the national bird of Cuba whose plumage exhibits the colors of the Cuban flag: red, blue and white. Interestingly, the bird cannot live in captivity and as such is an appropriate symbol for thousands of Cuban exiles who fled the country’s repressive communist regime under Fidel Castro.

One such exile is Olga Delulogeu, an accomplished artist and owner of the delightful Tocororo Cafe. Olga came to the United States in 1992 with a humanitarian vista. Her work is exhibited in the Aka-Tombo Cuban Art Gallery housed in an old, red rail car gallery connected to her restaurant.

The restaurant’s tabletops and walls are decorated with Olga’s vibrant Caribbean motifs, but to get the full effect, you’ve got to visit the gallery. Her paintings are a mix of scenes from her beloved Cuba and of the desert Southwest where she now lives. Her work also displays, in an innocent and happy way, the intense love she has for animals.

The Tocororo Cafe is housed in a ramshackle building left over from Madrid’s halcyon days as a coal mining town. In the 1970s, talented artists and craftspeople converted old company stores and houses into quality galleries, shops and services.

The Cafe is constructed of wood planks, the type of which have made popular frames for paintings and photographs for years. The color of the trim around the door and window shutters is probably closer to Taos blue than to the turquoise shade that defines the scenic Highway 14 alongside which the restaurant is situated. The restaurant is backdropped by tall evergreens.

Madrid is a village with personality (and personalities) to spare. If you’ve ever wondered where the hippies from the 1970s communes throughout Northern New Mexico went, you’re bound to run into some of them here.

If you’re looking for characters, look no further than the Tocororo Cafe’s unofficial host and greeter Casey, a Labrador mix who likes to mingle with guests, particularly after meals have been delivered to their tables.

Weather permitting, the best seats (albeit more utilitarian than comfortable) in the restaurant are just outside the restaurant’s entrance where you can breathe in the high mountain’s salubrious air.

One word of caution–if your blue cheese dressing tastes funny, it could be on account of a mischievous starling perched on an overhead tree branch.

Tocororo’s menu is somewhat abbreviated compared to the menu at some Cuban restaurants. It is sectioned off into sandwiches, tapas, salads, specials (called hot stuff), soups, side orders and desserts.

There’s also a section for hot coffee drinks. To Cubans, a cafe is a prominent cultural and social activity and it is said that there is no such thing as unsweetened Cuban coffee. The wait staff will provide sweeteners if you want, but most Cubans take it strong and black.

If your tastes lean more toward iced drinks, the menu includes various granitas (a dessert drink made by freezing a flavored juice and then blending it when it is served), freezes, traditional tropical fruit shakes and malts.

Unlike the coffee, Cuban milkshakes tend to be somewhat sweeter than even their American counterparts. They also tend to be served colder and with more pronounced fruit flavor derivations.

My compadre Rico Martinez, the brilliant comedic genius behind The Rant Pack blog site might never forgive me if I visited a Cuban restaurant and didn’t partake of a Cuban sandwich. Having made it his life’s questto find the ultimate Cuban sandwich, Rico will have to make the trek to the Tocororo Cafe.

He’ll have to make several trips because Tocororo’s menu features seven different Cuban sandwiches, each named for one of the seven Cuban provinces before the Castro regime took over.

The menu features the conventional Cuban sandwich (called La Habana) constructed of sugar cured ham, roast pork, Swiss cheese and dill pickle on a baguette. A vegetarian version of La Habana is also available. The menu also includes a sandwich in which the primary meat ingredient is turkey, one made with Albacore tuna, one with grilled chicken breast and a goat cheese sandwich with no meat ingredient.

Then there’s the Isla de Pinos with which we fell in love from bite one. This sandwich is crafted with Spanish chorizo, julienne potatoes, tomato, Swiss cheese and Romaine lettuce on a ciabatta bread canvas.

The amalgam of ingredients is terrific, with the real stand-out being the chorizo–a bit coarse, a bit dry, just a tad spicy–an excellent Spanish chorizo (which is wholly unlike Mexican chorizo). The sandwich is thick and served warm with the melted Swiss cheese blanketing other ingredients.

Portions at Tocororo are easily big enough to share, but the sandwich you might want to keep to yourself.

Instead share some of the restaurant’s tapas or better still, the Tocororo Combination Platter (pictured above right) which includes several different tapas. The platter is brimming with ham and Swiss cheese croquettes, Swiss cheese, Spanish olives with pimento, slices of sugar-cured ham and a Cuban specialty, roast pork.

The pork is roasted with cloves of garlic, but it isn’t overly garlicky and its surprising moistness seems to indicate some marinate (perhaps a citrus), but we were unable to discern its basis. The combination platter is served with a basket of warm, slightly toasted bread.

Another candidate for sharing is one of Tocororo’s inventive salads. There are four salads on the menu, none of which are exactly like other salads you’ll find at other restaurants.

The Tocororo Salad, for example, is crafted with Romaine lettuce, apple slices, dry cranberries, crunchy pecans, blue cheese crumbles, roasted turkey and a dressing of vinegar and extra virgin olive oil. The sharpness of the cheese, sweetness of the cranberries, tartness of the apple and freshness of the lettuce coalesce into a complementary array of flavors. Every bite is an experience in taste sensations.

For dessert, if you’re able to manage, a very good option is the apple crisp served three scoops of vanilla ice cream and drizzled with warm caramel. Calorie laden to be sure, but what a delicious way to expand your waistline. It, too, is made for sharing.

Sharing seems to be a common theme in this review, so it’s only fitting that you go with someone you love to Tocororo and share your experiences. It’s a restaurant many people haven’t heard about, but one made to be shared with friends and loved ones.