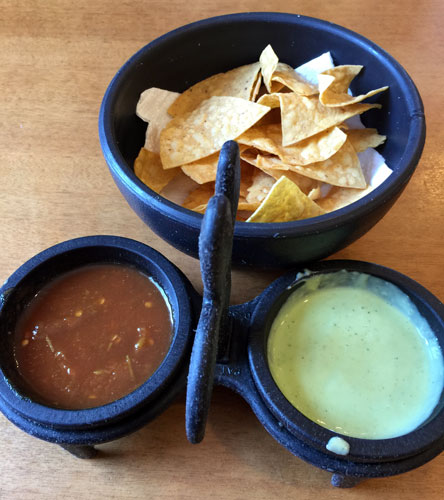 All too often faulty premises are based on a lack of information or experience. Take for example, British author Simon Majumdar, a recurring judge on the Food Network’s Iron Chef America who once declared “given how abysmal Mexican food is in London, I always thought that it was a cuisine made up of remains from the back of the fridge.” It wasn’t until Majumdar experienced tacos de tripa at a restaurant in Guadalajara, Mexico that he achieved an epiphany and fell in love with Mexican food. He called it a meal that changed his life.

Majumdar isn’t a man prone to hyperbole. In fact, he’s usually quite the opposite. He’s a no-nonsense, unapologetic cynic who tells it as it is and won’t spare the verbal rod. So, when a man widely acknowledged as the “Food Network’s toughest critic” tells you a Mexican meal changed his life, you’ve got to take notice. The more introspective among us might even ponder for ourselves if we’ve ever experienced any Mexican meal we’d consider life-altering.

And if not transformative, what about life-improving? Can you say your life is better, maybe even significantly so, because you’ve experienced food so good it renders you momentarily speechless, so utterly delicious it makes you contemplate the divine? Such were my experiences at Epazote in Santa Fe where Chef Fernando Olea’s culinary creations made this grown man swoon. Alas, 2015 has been a very cruel year for those of us who love world-class Mexican food, the type of which Epazote offered. It’ll be a long time before we’re over the May, 2015 closure of this fabulous restaurant.

As if losing Epazote wasn’t grievous enough, in July, 2015, we learned of the closure of the two Mexican restaurants in the Duke City which have perennially dominated the “best Mexican restaurant” category in virtually every online and print medium. First to go was El Norteno, the elder statesperson among Albuquerque’s Mexican restaurants; a restaurant once acknowledged as one of America’s very best Mexican food restaurants. Los Equipales, a fabulous establishment patterned after some of the fine cosmopolitan restaurants of Mexico City followed suit. Both were the victims of the bane of restaurants everywhere: location, location and location.

For years we drove by one of those restaurants, a Lilliputian Mexican eatery proudly sporting the colors of the Mexican flag and declaring “Viva Mexico” on its signage. We never visited this diminutive diner because, frankly, we didn’t want to stand in line and based on the number of cars in the parking lot, those waits could be substantial. Several years ago, Viva Mexico was reborn, residing now in a much larger edifice north of Central on Wyoming. Viva Mexico’s parking lots are still full and at peak lunch hours, the lines are still long. During our inaugural visit we figured out why those parking lots are full and those lines are so long.

To put it mildly, Viva Mexico offers a virtual compendium of Mexican food favorites–everything from mariscos blessed by the azure waters of the Pacific to the traditional foods of Chihuahua, the Mexican state which borders New Mexico to the south. As the largest of Mexico’s 31 states, Chihuahua’s culinary fare is as diverse and spectacular as its topography. Viva Mexico specializes in the foods of Chihuahua, many of which will be familiar to even the most casual partakers of Mexican food.

As you’re perusing the menu, two bowls of salsa will be delivered to your table. Unless you’ve got an asbestos-lined mouth, you may want to wait for your beverage order (the agua fresca de melon is amazing) to be delivered. These salsas have plenty of personality and enough heat to placate even the volcano-eaters among us. The more conventional red salsa bites back with a Scoville quotient very common to Mexico’s incendiary chiles. The green avocado and mayo “salsa” also offers a fiery punch though that punch is tempered by its two chief ingredients. The chips are formidable enough for Gil-sized scoops and are redolent with the presence of corn.

Viva Mexico is one of two Mexican restaurants (El Zarandeado is the other) in Albuquerque of which we know serves empanadas de camaron (that’s shrimp empanadas for you Texans). Available in quantities of six or twelve, they’re just a bit bigger than most Chinese dumplings. Tender, flaky, golden-hued pockets engorged with shrimp and cheese are served with a neon green salsa that may water your eyes. That salsa is wholly unnecessary and it alters the flavor profile of these pastry pockets

Anyone who laments the absence of good seafood in landlocked New Mexico has obviously not partaken of mariscos, the magnificent Mexican seafood which isn’t used solely in soups, tacos and burritos. Restaurants such as Viva Mexico serve mariscos in a variety of delicious ways. One of our favorite ways is on a tostada. The ceviche Culiacan features a formidable corn tostada topped with a bounty of tiny shrimp, unctuous avocados, chopped tomatoes and chopped scallions all impregnated with citrus juices (and if the ceviche isn’t citrusy enough, you can squeeze in the juice of accompanying sliced limes). It’s a very enjoyable starter.

The most prodigious platter on the menu is the parrillada para dos, a veritable mountain of meat for two. This boon of carnivores and bane of vegetarians is intimidating by virtue of its sheer size. Picture what appears to be about a pound (or two) of beef and pork chops topped with grilled onions and served with two chiles toreados (fried jalapeños). Though waifishly thin, the bone-in chops are meaty, albeit on the chewy side. They go especially well with the white onions which are more translucent than caramelized, rendering them both sweet and sauteed-like texture.

The parrillada para dos also includes a papa asada, a roasted potato slathered in butter. It’s long been my contention that no one roasts potatoes as well as Mexican restaurants and Viva Mexico is no exception. Wrapped in foil, the potato is roughly the size of a Nerf football, but it’s as soft and perfectly baked as the baked potatoes of your dreams. Also included is a bowl of charro beans, whole pintos immersed with bacon and cut-up hot dogs in a light broth. Last and perhaps best is a bowl of ooey, gooey, melty queso fundido served with corn and (or) flour tortillas. Extricating queso from its bowl is akin to a taffy pull. If you don’t have a pair of scissors you’ll have to cut the cheese (literally) with your fingers.