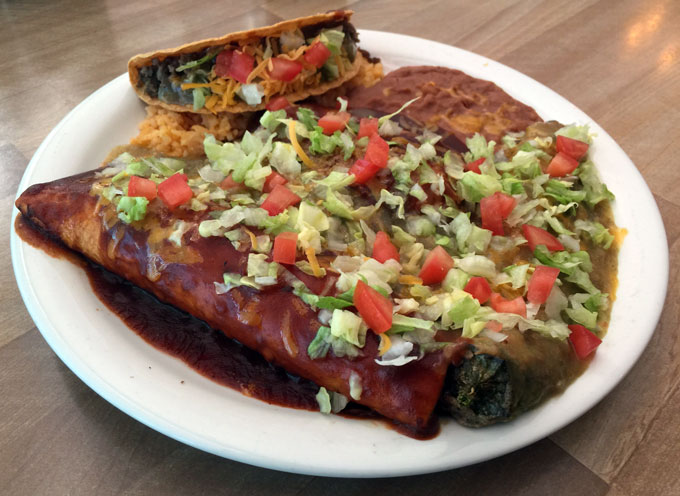 It’s a folly of the human condition that we tend to go looking for exciting food in all the shiny new restaurants…only to find it in the venerable restaurants that time has nearly forgotten. The fleeting, fickle nature of our fascination with something new and something different is so strong that some restaurants actually peak in popularity within a few months after opening, particularly after their first glowing reviews. Perhaps indicative of our human need for constant new sources of stimulation and gratification, diners (and restaurant critics) flock to new restaurants like moths to a flame. In our minds, new seems to translate to fresh and exciting. We seem drawn to the spit, polish and promise of new restaurants in our constant quest for new and different.

In time the flash and panache of modernity wears out and restaurants which survive the ravages of time and the fickleness of the dining public come to be referred to as “venerable” or an “institution.” True, there are some which–much like a lonely grandfather in a nursing home–wait eagerly for visitors that never come, but most have carved out a niche of regulars who visit with regularity. Those of us who have achieved our own advanced levels of geriatric progression tend to appreciate older restaurants a bit more than youngsters do. Older restaurants tend to inspire nostalgic reflections about the good old days when, like us, those venerable institutions were younger and more spry.

By restaurant standards, Beto’s Cocina on Juan Tabo just north of Constitution, is an elder statesman and every bit the venerable institution described above. Still going strong after more than a quarter-century, Beto’s, named for owner Alberto “Beto” Urquieta, is ensconced in the Sandra Shopping Center, not the most heavily trafficked center of commerce in the Duke City (an understatement). Parking spots near the restaurant are plentiful, but that’s more indicative of the ghost town feel of the shopping center with its several vacant storefronts. Beto’s, unfortunately, does not have a prominent storefront presence visible from Juan Tabo, a factor perhaps in its lack of mention among the city’s popular New Mexican restaurants.

Surprisingly my first visit to Beto’s Cocina didn’t transpire in the mid-90s when we returned to Albuquerque for good. In fact, we lived in the Duke City for more than two decades before my shadow crossed over Beto’s door. My reason is surprisingly pedestrian–out of sight, out of mind. We just don’t frequent the area as much as we do other sections of the Duke City. That seems to be the case for many diners. Perusal of Yelp’s page for Beto’s yielded only six reviews, the most recent more than a year old. There were ten reviews for Beto’s on Zomato. My research revealed the last time Beto’s Cocina was reviewed by one of the city’s periodicals was in 1993 when Joline Gutierrez Krueger wrote the fabulous “Chow Mondo” restaurant review column for the much-missed Tribune. Back then, Beto’s was a young, fresh face on the Duke City dining scene.

A couple of things will probably catch your eye about Beto’s, one even before you set foot inside the restaurant. First, the Urquieta family doesn’t shy away from its Christianity. The front door is flanked on one side by the words “Breakfast, Lunch and Dinner” and on the other side with the name “Christ” and a Biblical passage. Even the signage references a New Testament passage (Matthew 4:4 – Jesus answered, “It is written: ‘Man shall not live on bread alone, but on every word that comes from the mouth of God.). There are more passages on the restaurant’s walls along with family photographs, decorative Mexican serapes and colorful sombreros. The second thing diners (especially Dallas Cowboys fans) will notice is the family’s (misbegotten) loyalty to the Pittsburgh Steelers. One entire wall is dedicated to the hated “Black and Gold” and you’ll find other Steelers memorabilia throughout the restaurant (fortunately not to close to the table in which I was seated).

Beto’s menu includes all the New Mexican food favorites including enchiladas done in more ways than we’ve seen in just about any restaurant in town. A number of combination plates offer excellent variety, surprisingly high quality and a good introduction to the cook’s culinary skills. Neither the green or red chile are made with cumin. Make sure you have salsa and chips on your table as you peruse the menu. Though not complimentary, they’re well worth the pittance you’ll pay. As at most restaurants which serve salsa, it’s the most piquant item you’ll enjoy during your experience. This salsa has a tongue-tingling bite, the kind that generates the endorphin rush on which New Mexicans get high. The chips are crisp and have a pleasant corn flavor.

The large combination plate, roughly the size of a truck tire, includes more individual items than any combination plate in recent memory. A hard-shelled taco brimming with seasoned ground beef and topped with shredded cheese, lettuce and tomato may have you cursing the fact that you devoured all the salsa and didn’t leave any for the taco. On the other hand, you may need the taco to quell the heat generated by that incendiary salsa. Shredded beef is also the filling for the burrito while the enchilada is filled with molten Cheddar. The pork engorged tamale proved to be my favorite thanks to an optimum balance of corn masa and red chile marinated pork. This combination plate is served with unremarkable Spanish rice and beans the way your abuelita may have prepared them. Both the red and green chile are packing heat though they pale in comparison to that fiery salsa.

In the not too distant future, we’ll be able to tell our children and grandchildren about restaurants which once severed complimentary sopaipillas with every plate and our story will be received with the same credibility as if we’d told them we walked to school in a foot of snow. Beto’s is one of those rare restaurants which still offers complimentary sopaipillas with some plates. Served with a plastic squeeze bottle of honey-flavored syrup, the sopaipillas aren’t quite as puffy as others around town, but they’re also not greasy. Open them up and a puff of steam escapes, as welcoming a siren’s call as there is in a New Mexican restaurant. The sopaipillas offer engorged cavities for the honey, a perfect way to finish a good meal.

Beto’s Cocina is one of those venerable institutions that time has seemingly forgotten until you step through its doors to find a number of regulars enjoying the favorite dishes which have given them comfort and sustenance for years. If you’re not one of those regulars, it may be time for you to rediscover Beto’s Cocina.