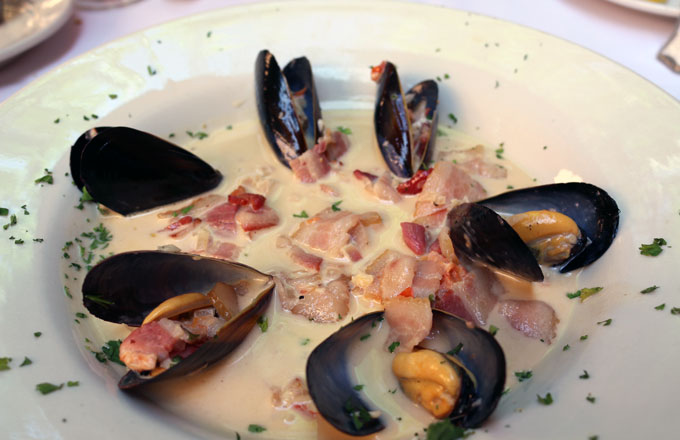 When she asked me to repeat the name of the French restaurant where we were dining one slightly breezy Sunday morning, I knew my clever bride had something in mind. Relaying that we were dining at Chez (pronounced “shay”) Mamou, she retorted “are you sure it’s not called “Shame on you.” That was her reaction to a server having deposited a stale, probably older than day-old baguette on our table. She followed up with “no self-respecting French restaurant, especially one claiming to be a bakery would serve bread baked by Napoleon’s baker.” Whether or not the fossilized (her term) bread was indicative of Chez Mamou’s daily performance, it was enough to rile my usually saintly patient wife.

By this point, she had already dissed the coffee, an Allegro Coffee blend, which she found entirely too strong and “more bitter than supporters of England wanting to remain in the European Union.” (In the interest of full-disclosure, she finds coffee too strong if it can’t be “cured” by five or six packets of Splenda.”) She would later repeat her “what’s the name of this restaurant” comment while eating some of the restaurant’s highly-touted pastries and croissants, reputedly baked by a master baker (and I won’t repeat how she twisted that term). That, my friends, is why she leaves the reviewing to me…and lest you think she’s nit-picky, the only time she’s ever compromised on her exceedingly high standards is when she said “yes” to me.

You should certainly set your expectations high when visiting a restaurant as highly touted as Chez Mamou. Never mind that it earned rave reviews from both the Albuquerque Journal and Santa Fe Reporter, where it really earned its creds with me is from a Facebook post by Daniela Bouneou, erstwhile owner of the fabulous Torinos @ Home. When Daniela posts about a restaurant, you’re well advised to heed her recommendation. Chez Mamou also earned a 3.5 rating (out of 4) from Yelp, 4.5 (out of 5) from Trip Advisor and 3.9 (out of 5) from Zomato. Interspersed among mostly glowing comments in these three crowd-sourced review forums are a few opinions which would make excellent roast material. At least our experience wasn’t an outlier.

Chez Mamou is one of several French restaurants serving the City Different, not really a surprise considering the long and storied history of French people in New Mexico. Launched in 2012, its East Palace Avenue location is scant blocks away from the Santa Fe Plaza, but in ways it seems almost an ocean away…as far away as a Paris sidewalk cafe. That’s especially true on a Santa Fe summer morning if you’re trying to escape the sweltering heat of Albuquerque as was the case during our inaugural visit. A light, cool breeze and the courtyard’s sun-shielding shade transported us to a better time and place. Had we known Chez Mamou was so pet-friendly, we might have brought our four-legged children Tim and The Dude.

Weather-permitted, the courtyard is definitely preferred seating. If the courtyard is full, there are a few tables preceding the front entrance that’ll give you a great view of the street activity. The space which houses Chez Mamou is bisected into two halves, one occupied by Noëlla Jewelry Couture. Decor is tasteful and homey. Step up into the cafe and your eyes will immediately gravitate toward the pastry case with its colorful display of pastries, breads, croissant and other French baked delicacies. Few display cases in New Mexico are as lovely. You’ll want to order the chocolate croissants the minute you walk in or you risk the cafe running out entirely.

From among the baked goods we shared, the chocolate croissants stand out. While no croissant will ever have enough chocolate to sate this chocoholic, the chocolate chunks on these beauties are strategically placed so that you’ll experience sweet and savory tastes in virtually every bite. The croissants are buttery, light and flaky, but they’re served with a hard butter which is a challenge to spread. Fortunately a housemade strawberry jam accompanied our croissants. The jam, nearly pureed in texture, was very reminiscent of fresh strawberries plucked at their optimum ripeness, neither too sweet nor too tart.

Where Chez Mamou really stands out is in the large variety of its menu, particularly its brunch offerings. While many restaurants feature an abbreviated brunch menu usually short on lunch-type offerings, Chez Mamou’s brunch menu is staggering in its variety. Like me, the cafe doesn’t believe 7:30 in the morning is too early for Frog Legs, Escargots, Fettuccini Carbonara or any number of sandwiches on a canvas of freshly baked bread. If you’re more of a traditionalist, the menu also includes a number of omelets (made with eggs produced by local, happy, free-range, Nambe hens) as well as sweet and savory crepes and even a Croque Madame…all because sometimes you feel like breakfast and sometimes you feel like lunch.

In England, as in much of Northern Europe, mussels are so readily available and relatively inexpensive that they’re often dismissed as a poor man’s shellfish. During our years in England, we enjoyed mussels by the bushel, but we never contemplated the possibility of incorporating New Mexico flavors (not that we had red or green chile readily available) into either the wine- or cream-based broths we regularly prepared. Thankfully restaurants in New Mexico, regardless of genre, know their patrons practically expect a little red or green in virtually every menu, even on dessert items…and as we all know, chile improves the overall flavor of everything it touches.

In an inspired example of France meets New Mexico, Chez Mamou offers an eponymous appetizer called Mussels Mamou which showcases the lively flavor of red chile paired with the incomparable flavor of applewood smoked bacon in a light wine sauce punctuated by shallots and parsley. Although comprised of only a paltry six mussels, everyone knows that more than half of the enjoyment of mussels is in sopping up the broth with a good bread. Because the bread we were provided lacked the dredging qualities of great broth sopping bread (hence my Kim’s dissatisfaction described above), we had to spoon up the broth instead. While still good, the sensory–tactile, olfactory and taste–experiences were diminished somewhat.

Because she missed the French fries often served with mussels (who doesn’t love moules frites?), my Kim’s choice of entree was the Steak Frites, a flank steak served with a pile of French fries and assorted vegetables. After recent encounters with sinewy, tough ribeye steaks, we were delighted to find the flank steak tender and absolutely delicious (in Kim’s estimation, better than a much more expensive steak at Ruth’s Chris). Prepared and seasoned to her exacting specifications, it didn’t even need the delectable mushrooms in gravy (not quite duxelles style) though they, too, were mouth-watering. So were the vegetables (carrots, broccoli, zucchini, cauliflower) which were so good even avowed vegetable-haters of all ages would enjoy them. Alas, the frites were strictly out-of-a-bag quality, a far cry from the twice-fried frites we enjoyed in Europe and now in La Quiche Parisienne in Albuquerque.

One of the more challenging decisions we faced during our inaugural visit was how to enjoy the duck which is prepared three different ways: duck confit, duck confit pasta and duck confit salad. The duck confit (red wine demi glace over slowly cooked duck) served with fresh roasted tomato, seasonal vegetables and potatoes au gratin had me at au gratin, a potato dish served often at French restaurants bur almost nowhere else. A layer of Gruyere blanketed the perfectly prepared potatoes, imparting a creamy texture, richness and saltiness. As with the aforementioned mussels, the superb red wine demi glace beckoned for bread so as not to leave a single drop on the plate. It was one of the best demi glace preparations we’ve had at any French restaurant in New Mexico. The duck, too, was well prepared and nicely seasoned with dark meat qualities showcased in every bite.

As beautiful as the pastries under glass appeared to be, we must have ordered the wrong ones because their appearance was certainly deceiving. Kim opted for the cherry tart, the most redeeming quality of which was that real, whole cherries were used, not some gloppy gelatinous mix. Alas, the thickness and plenitude of the breading was off-putting. Such was the case as well with the almond tart of my choosing. Topped with almond slivers and walnut pieces, it would have been far more enjoyable had there not been so much breading.

As with virtually all restaurants we visit, our experience was a mix of good and not-so-good. That’s not surprising. What is surprising is the delta between the good and not-so-good. Our entrees were outstanding, as good as prepared at any French restaurant in the Land of Enchantment, but the baked goods (save for croissants) were lacking. It’s quite possible this was an anomaly, but it’ll take additional visits to know for sure. That’s something this gastronome and his oft-fussy better-half are happy to do.