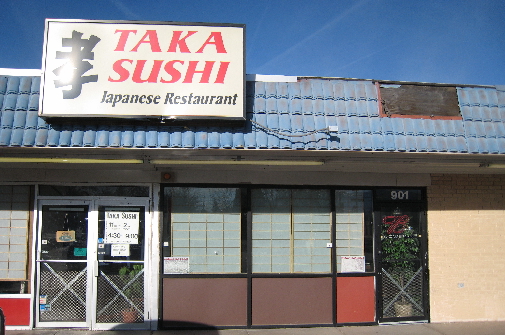 From the outside, Taka Sushi lacks the polish and veneer of its competitors, appearing more like a remnant of the 1960s with dated paint and austere signage. It isn’t much better when you step inside.

Clutter (or “casual and homey” as Scott Sharot called it in his terrific tome New Mexico Chow), not feng shui, seems to define the restaurant’s decorating style.

Leave the spit and polish to trend followers who are impressed with over-the-top flamboyance (can you say Azuma and Samurai). For terrific Japanese food, you can’t do much better than Taka Sushi, never mind that it isn’t stylish or cool.

Taka Sushi is a long-time Duke City favorite that we didn’t discover until 2006 thanks to my multiple-time re-read of the aforementioned New Mexico Chow guide which continues to introduce us to off-the-beaten path treasures we might otherwise neglect. It’s a must-have resource for all New Mexico diners.

Stepping into Taka Sushi has one similarity to stepping into a mall store. An annoying electric “greeter” is triggered when you step into the large dining room segmented by screens. A relatively small sushi bar directly in front of you as you walk in. The wait staff appears to be genuinely friendly and attentive, none of that artificial wait shtick here. Even if you’re not a regular, you’ll be treated as a welcome guest. A waitress might even jokingly chide you if you dare to ask for a fork, levying a two-dollar charge for that dining faux pas.

One of Taka Sushi’s big draws is a lunch- and dinner-time “sushi happy hour” in which pieces of sushi and sashimi are offered for a reduced price. The sushi menu includes several interesting and innovative ingredient combinations. You’ll also find maki style rolls you won’t see at other restaurants (such as the chili relleno roll, pickle roll and garlic roll).

Most meals include the complementary soup and salad precursor that’s seemingly been done to death at every Japanese restaurant in town. Taka Sushi’s version is slightly different. Instead of the de rigueur miso soup you’ve had a million times, you might be treated to a simple, but very savory fish broth with small noodles and green onion. It’s a delicious way to start a meal. The salad is drizzled with a dressing made with a rice vinegar, soy sauce and brown sugar triumvirate that provides taste sensations of sweet, sour and savory. It, too, was very good.

One of the best ways to introduce yourself to a multitude of taste sensations is to order the “Boat Special” for two at a bargain price of under $40. This special includes nigiri style sushi (mackerel, tuna, salmon, unagi, red snapper and yellowtail) as well as maki style rolls (tuna roll and California roll), tempura shrimp and vegetables, and teriyaki chicken and beef. On the high seas, this burden loaded boat might capsize from the profusion of food it bears.

The sushi is excellent even though some of the rice may separate in your soy sauce and wasabi mixture. The wasabi is water your eyes piquant, a rarity in Albuquerque’s sushi scene.

The teriyaki sauce used on the beef and chicken is not quite syrupy sweet or thick, but provides a nice contrast between sweet and savory. The beef is tender and fairly lean, but the chicken isn’t exclusively white meat and you might find some sinewy bits. Both the teriyaki beef and chicken have an endearing smoky taste you don’t always find in Japanese restaurants.

Taka Sushi just may have the best tempura in Albuquerque. The tempura shrimp is separated from tempura vegetables (carrot, bell pepper, broccoli, zucchini, celery, onion ring and yam) by thin noodles and tempura designed to look like a flowering plant fanning out. The tempura is crisp and applied thinly, serving as a delicious coating which allows the fresh, grilled vegetables and their inherent flavors to stand out.