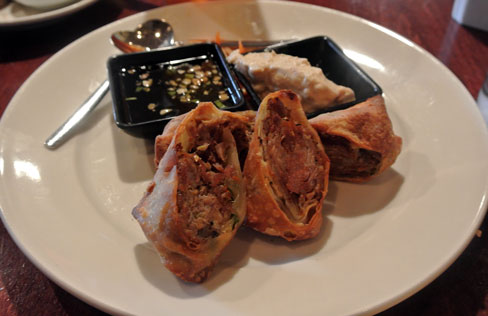 Albuquerque’s Nob Hill district largely owes its emergence as the city’s first “suburb” to Route 66, the great Mother Road which carried Americans westward. Because of Route 66, the Nob Hill area has been, since before World War II, a thriving residential community replete with restaurants, motels, a modern movie theater, pharmacies and restaurants. Today it remains the city’s cultural heart and, thanks to the preservation of Route 66 era architecture, retains much of the charm that captivated west bound sojourners.

New tenants such as Zinc Wine Bar & Bistro which launched in 2003 hold court in well preserved brick buildings and seem completely at home. Antique mirrors, distressed wood floors, stained glass and warm colors coalesce with intoxicating aromas to make this classy bistro one of the city’s best launches (and lunches) of the new millennium. The French rotisserie, visible from the main floor and the open mezzanine above, turns out some of the best meals in the city.

While considered a premium fine dining destination, Zinc’s generous portions are comparatively value priced–your bill may approach three figures, but you’ll feel you got your money’s worth. Meals are well paced with appetizers and entrees brought to your table at seemingly prescribed intervals that allow you to savor and reflect on the quality of the former without pining for the latter. Portion sizes are reasonable–generous, but not profuse.

There are nearly as many floor levels at Zinc as there are layers of flavor in some of its terrific food. There’s a downstairs bar with a lighter menu, a street-level dining room and a mezzanine floor that provides perhaps the best vantage point of any floor. Comfortable spacing between tables is available at all three levels.

Zinc is the brainchild of twin brothers Kevin and Keith Roessler, two veteran restaurateurs who also own Season’s Rotisserie & Grill on the northern outskirts of Old Town. They also own Savoy, a Swanky fine-dining restaurant launched in 2007 in Albuquerque’s Northeast Heights. The menu at Zinc seems to be a fusion of eclectic American comfort food with departures into New Mexican and French cuisine. The menu is inventive and inspired with something for everyone, including a nice selection of vegetarian entrees.

The clientele is nearly as eclectic as the menu. At any given meal, you’ll see young ladder-climbing urban professionals and more seasoned and affluent diners who have already ascended to or near the top of the ladder. Most will order wine with their dinner and will linger in conversation long after their meal is over.

The wait staff is attentive without hovering and informative without being pedantic. They are well-versed in their craft and capable of clearly describing the nuances of the restaurant’s menu. Their recommendations don’t necessarily lean toward the most expensive items on the menu.

4 August 2014 (Brunch): One item everyone at Zinc recommends are the crispy duck confit eggrolls served with peanut curry and chile-lime dipping sauces. The duck is amazingly tender, the result of slow-cooking. It is wrapped in a won-ton type wrapper and is sliced diagonally (giving it the appearance of four egg rolls). Other components of this delicious appetizer are ginger, mushrooms, sesame oil, scallions, chopped peanuts. soy sauce, spinach and carrots though it is the duck itself that will win you over. These are easily among the best egg rolls in the city and are outstanding even without the dipping sauces. The peanut curry sauce stands out. It’s entirely unlike and better than the peanut sauce served with satay at most Thai restaurants. Unlike the Thai peanut sauce, it’s not cloying. It’s a savory sauce with a piquant punch to it.

16 March 2008 (Dinner): Another excellent value appetizer are the steamed black mussels for only twelve dollars. Bathed in a basil-chardonnay broth and crowned with colorful julienne vegetables, these mussels are top tier. You’ll want to sop up the broth with the restaurant’s wonderful hard-crusted yet yeasty bread. For years these mussels were one of the city’s very best bargains at ten dollars, but a dreary economy necessitated change. They’re still a bargain considering the quality and deliciousness.

4 August 2014 (Brunch): Lest I forget, the complementary basket of bread is among the city’s best. I believe the bread is made by Albuquerque’s Fano Bakery, one of the very best bread-making companies in the state and a purveyor of artisan style rustic and specialty breads. It’s the type of bread you could eat by the loaf–with or without butter. The butter served at Zinc is soft and smooth for easy spreading. During Saturday and Sunday brunch, the bread plate may include croissants and scones. The wait staff will replenish them happily.

26 December 2010 (Bruch): Lamb is certainly a specialty at Zinc and is accented with seasonal touches. The grilled lamb loin Mignon, for example, is accompanied by a chorizo-sweet potato tart topped with a goat cheese bechamel, contrasting elements which bring out each others best qualities. A cleanly simple winter vegetable melange–baby asparagus, carrots, roasted onions–is perfectly prepared, so good even finicky children would love it. The lamb loin, prepared at medium rare, sits on a puddle of pomegranate demi glace, an ever-so-slightly tangy sauce with a lightly lacquered texture which couples so well with the lamb that they rhapsodize on your taste buds with a subtle medley of flavors you’ll remember long after your meal. The lamb has none of the gaminess for which lamb is often disdained.

16 March 2008 (Dinner): If you want something more lively, the seared flank steak Au Poivre will invigorate your taste buds with a pronounced black peppercorn taste. A nine-ounce steak seared in a cast iron pan, it is served with buttermilk mashed potatoes, fried mushrooms and onions, all of which are wonderful. Steak Au Poivre is a staple at French brasseries throughout the country (both France and the United States), but is sometimes prepared with an excess of pepper, making it a bit acerbic. At Zinc, it is perfectly prepared so that the peppercorn taste complements, not dominates, the flavor profile. It is served with an espagnole sauce, a veal stock roux reduction sometimes called one of the “mother sauces” of classic French cooking.

Sunday brunch is an event worth getting up for at Zinc. The menu is only somewhat abbreviated, including more dining options than just about any brunch menu in town. The dulcet tones of soothing guitar music playing soft and low may just make the rest of the world seem so far away and small. An eye-opening roasted chicken and cashew salad is a great way to start. This superstar salad features sugar snap peas, sweet n’ sour red onions and baby carrots mixed with field greens and a sharp Maytag blue dressing that emboldens the salad. It’s one of several inventive and delicious salad options available for brunch.

26 December 2010 (Brunch): Zinc’s pecan-crusted chicken and chorizo relleno, a unique rendition of the traditional New Mexican stuffed chile pepper, is also one of the state’s very best. A baked poblano is engorged with cream cheese, Asadero cheese, chicken breast and crumbled sausage then topped with a fried egg sunny and covered with a wonderfully smoky and piquant Ancho chile sauce. Ancho chiles are essentially dried poblanos which may surprise some considering poblanos have a very mild flavor, barely registering on the Scoville scale. Ancho chiles, on the other hand, can have significant heat and a pungent, smoky, wonderful flavor. More restaurants should employ this very diverse and very delicious chile.

Also worth getting up for is Zinc’s house-made pork sausage patty (a carnivore’s dream), which along with the sausage served at the San Marcos Cafe, may be the best sausage in New Mexico. It’s got the perfect balance of piquant bite and savory flavor sausage lovers appreciate. The sausage is available on several brunch entrees, including an amazing array of surprisingly good New Mexican dishes that for some reason aren’t available on the lunch or dinner menu. That’s a shame because if Zinc focused exclusively on New Mexican food, it would be in rarefied company with the very best New Mexican restaurants in the state.

4 August 2014 (Brunch): As with fashion and music, the culinary world isn’t exempt from the whimsy of the trend. While some foods are forever in vogue, for better or worse others come and go. The Duke City may have been a bit late in following the waffles and chicken trend, but now it seems every restaurant in town is offering a variation of this popular soul food favorite. Worse, some local restaurants have taken a rather homey combination and made it uppity with gourmet syrups and highfalutin alterations which make the chicken unrecognizable. While Zinc jumped on the trendy bandwagon, at least the chicken and waffles haven’t been upscaled. Better still, they’re actually pretty good. The chicken, three pieces–a leg, a thigh and a breast– though prepared on a deep fryer, actually has a pan-fried taste. The waffles are light, fluffy and served with maple syrup.

4 August 2014 (Brunch): Another breakfast standard which never seems to fall out of fashion is grilled pork chops, a solid and unspectacular (translation: boring) offering. It’s usually up to whatever accompanies those “supporting cast” pork chops to enliven breakfast. The yang to the grilled breakfast port chop’s yin is a blue corn-crusted Poblano stuffed with Mexican cheeses, fresh corn and peppers topped with a sunny side-up egg and a chipotle fruit glaze. Frankly, the blue corn crust and egg dominate the flavor profile so much we had to taste the chipotle fruit glaze and fresh corn separately to make sure they were there. It’s rare that breakfast pork chops are the highlight of a breakfast, but that was the case here. The pork chops may have been solid and unspectacular, but they met expectations.

16 March 2008 (Brunch): Our waitress told us that some visiting tourists can’t handle the heat of New Mexican dishes and send them back. What a shame they don’t have the heat tolerance of New Mexicans. What a shame that they miss out on enchiladas engorged with absolutely delicious chorizo sausage and baked chicken. Perhaps more to their heat tolerance level are Zinc’s rendition of stuffed sopaipillas which aren’t served with chile. Instead, two puffy sopaipillas are filled with lemon-blueberry custard then finished with Bosque Farms BeeSweet honey drizzle.

If you love lip-puckering lemon with real blueberries, this is the dessert for you. If you love real honey, you’ll love BeeSweet and you’ll lament the fact that far too many New Mexican restaurants fill their squeeze bottles with “sopaipilla syrup,” the honey flavored syrup that pales in comparison to real honey.

26 December 2010 (Brunch): Another fabulous dessert is the chevre cheesecake tart made with a honey granola crust branded with the letter “Z” (and probably not for Zorro). Rivulets of ruby port gastrique and fig preserves provide terrific contrasts to the sweet, creamy cheesecake. On the side of this dish is honeycomb, the pure essence of honey sweetness that’s better than any candy.

Zinc upholds the Nob Hill tradition and has itself become a destination worthy of the Mother Road. It’s a Santa Fe quality restaurant in the Duke City.