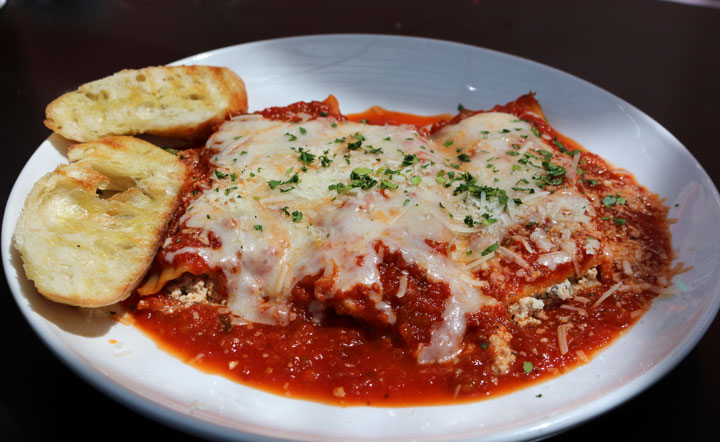 “When I am an old woman I shall wear purple
With a red hat that doesn’t go, and doesn’t suit me,
And I shall spend my pension
on brandy and summer gloves
And satin sandals,
and say we’ve no money for butter.”
~Jenny Joseph

“Only you,” my Kim chided me “would approach an Italian bistro and associate it with a poem considered an ode to nonconformity.” It couldn’t be helped. My mind just works that way. Besides, purple is prominent on the exterior facade approaching Zullo’s Bistro on Old Route 66. “Why so much purple?” I wondered—”especially amidst the adobe-hued homogeneity that is Albuquerque.” My Catholic upbringing taught me that purple is used during Advent and Lent as a sign of penance, sacrifice and preparation. Purple also represents justice as one of the three colors of Mardi Gras. In the best-selling novel The Color Purple, purple is a reminder that we should take the time to notice what little things God does to show us that He loves us. Purple, it seems is a very versatile color.

There’s even more purple inside the restaurant as well as on the expansive back patio It’s a drastic departure from the days in which the edifice–then home to the Blackbird Buvette–was as dark as a goth wardrobe. So why purple? Mike Zullo who owns the bistro with his daughter Jenni, is–like the old woman of Jenny Joseph’s poem–a bit of a nonconformist (he plays bluegrass music after all). While other restaurateurs might go with an earthy adobe tone, he likes purple. Don’t get me wrong. It’s not a Barney the annoying Dinosaur purple. It’s more of a purple M&Ms purple. There are pastel colors, too…and most “normal” people will probably notice them first.

Zullo’s Bistro is the family’s investment in Albuquerque, Mike told us. It’s an investment that’s been fraught with challenges–and not solely because the Albuquerque Rapid Transit (ART) has made driving and parking downtown a serious challenge. Since launching in the Spring of 2017, a number of days in the hundred-degree range slowed walk-in traffic from neighboring businesses–so much so that a planned daily lunch seven days a week is down to four days. As the saying goes, however, “when life gives you plums, you make plum wine (purple of course).” While lunch traffic may be way down, this is one jumping joint in the evening. Zullo’s is one of the few downtown dining alternatives to food trucks that remains open into the wee hours of the night. Live music is a huge attraction.

So is the capacious back patio, a corner of which is a designated musical space. The dog-friendly patio offers sun-shielding canopies and overhead fans to help offset the heat. Alas, during our inaugural visit on a Saturday lunch hour we had the patio to ourselves. Still, it’s easy to see why the back patio is such a popular draw. Admittedly, we probably wouldn’t have been on the back patio if Zullo’s didn’t offer some tempting Italian food prepared by an Italian chef. In 32 reviews Zullo’s has amassed a four-star rating (out of five) on Yelp.

Zullo’s menu lists only about a dozen items, but a compendium-like menu is never a guarantee of quality and deliciousness. Instead, Mike Zullo told us, his family restaurant emphasizes fresh, high quality ingredients and even pays tribute to the Land of Enchantment’s favorite vegetable by offering a green chile marinara option as well as frites with green chile. There are three salads, two sandwiches and three pasta items on the menu along with three appetizer items such grass-fed beef meatballs (more on them later). For diners who pride themselves on trying everything on the menu, it won’t take many visits to do so. Thankfully, you’ll want to repeat several of the dishes.

One dish you’ll enjoy time and again is the beet and feta salad (yellow and red beets, feta, toasted walnuts, craisins, and spinach tossed in orange vinaigrette). Yellow (golden) beets vary in sweetness, tending to be a bit sweeter and tasting a little less earthy and more mellow in intensity than their red counterpart. Texturally, yellow beets are more tender and are easier to masticate. They’re my favorites while my Kim enjoys the red beets best. To counterbalance the sweetness of the beets, ask for an additional ramekin of the orange vinaigrette, one of the very best we’ve had. The toasted walnuts also provide a nice foil.

Bruschetta is an example of culinary ingenuity meeting practicality. Originally created as a means to use up bread beginning to get stale by adding oil and seasonings to improve its flavor, it’s become a versatile appetizer or snack. Toasted slices of bread can be served with any number of toppings, the chef’s imagination being the sole limiter. At Zullo’s, the bruschette features triple-cream Brie cheese, freshly chopped basil and assorted tomatoes on a toasted baguette. It’s akin to a Caprese salad sans mozzarella. Served three to an order, it’s a nice starter! The fresh cherry tomatoes and their sweet, juicy flavor are a perfect foil for the invigorating basil and the rich, milky Brie. Our sole complaint (and it’s a nit) is that we had to split one of the bruschette. Make it a foursome and we would have been very happy.

In 2008, the New York Times celebrated the return of the “lost Jersey tomato.” Believe it or not, the Garden State’s state’s agricultural reputation was built on consistently sweet, juicy tomatoes (and jokes crediting Three Mile Island soil aren’t appreciated). According to the Times, “the classic Jersey tomato is not an heirloom, loosely defined as a tomato your great-grandfather might have grown in the backyard.” Instead, it’s a disease-resistant, high-yield, red, round tomato developed for taste. New Jersey tomatoes are the only tomatoes Zullo’s uses on their sauces. They’re more expensive, but the quality is certainly telling.

Still believe nothing says Italian food like a big bowl of spaghetti and meatballs? Think again. If you visit Italy and ask for spaghetti and meatballs, you might hear “sfigato” (loser) and “stunad” (stupid) being uttered under your server’s breath as they steer you toward something more authentically Italian. Spaghetti and meatballs is strictly an American invention popularized in New York City. For that, generations (at least of Americans) are grateful. You’ll certainly give thanks for Zullo’s free-range meatballs served with fresh, hand-cut Pappardelle noodles and basil marinara.

My Kim believes these magnificent orbs are the best in Albuquerque and second only in New Mexico to the amazing meatballs at Deming’s tranformative Forghedaboudit. Zullo’s meatballs aren’t of the crumbly variety, retaining their integrity even after you pierce them with your fork. Already the most popular item on the menu, the grass-fed beef and sausage meatballs are about the size of a golf ball and are probably the first item on your plate you’ll attack, but don’t discount the papardelle. Papardelle, a flat pasta cut into a broad ribbon shape, is tailor-made for sauce and Zullo’s doesn’t spare it.

With nearly nine months having elapsed in 2017, reflecting on Gil’s “best of the best for 2017” has started to take on a more serious tone. It’s a virtual certainty that Zullo’s roasted mushroom manicotti with green chile marinara will make it onto that hallowed list. Normally served with a basil marinara, the four manicotti dish is an exemplar of flavors that work very well together. The roasted mushrooms and their earthy deliciousness are finely diced and generously stuffed into the manicotti which is topped with the rich, fresh-flavored New Jersey marinara sauce punctuated with New Mexico green chile. Between the acidity and sweetness of the marinara sauce and the pleasant piquancy of the green chile, this sauce is a winner. Topping the manicotti is a melted three-cheese blend of Parmesan, Mozzarella and Pecorino Romano sprinkled with basil. This is an outstanding dish!

The dessert menu is a bit on the small side, but the tiramisu has already garnered high acclaim. Alas, Saturday night diners and revelers polished it all off so the only postprandial treat available to us was a chocolate gelato sprinkled liberally with walnut chunks. Tannins in walnuts are great for balancing out sweet dishes, not that the chocolate is especially sweet. Still, the walnuts provide a nice flavor contrast to an “adult” ice cream with plenty of rich creaminess, chocolate chunks and dense thickness. It’s a nice way to finish a great meal though someday we’ve got to return to try that acclaimed tiramisu.

Zullo’s Bistro is living proof that you don’t have to be old to wear purple. It’s seriously one of the very best reasons to visit Albuquerque’s downtrodden downtown district. Go for the roasted mushroom manicotti and you’ll be back time and again.