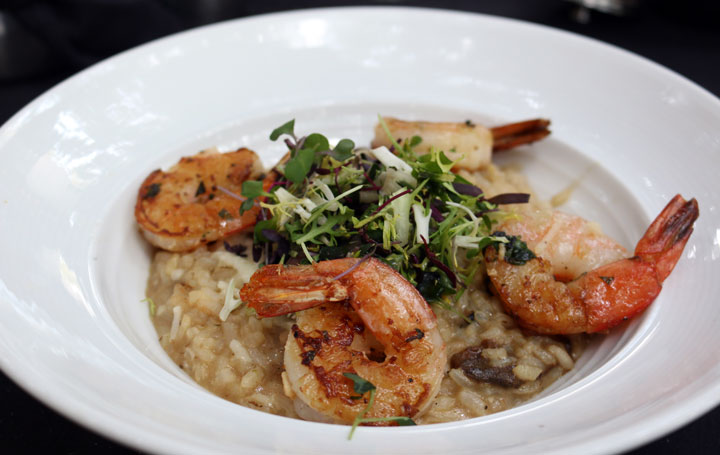 Dean Beck: What do you have against preachers?
Clay Spencer: It’s what they preach against I’m against.
Dean Beck: I’m afraid I don’t understand?
Clay Spencer: They’re against everything I’m for.
They don’t allow drinkin’ or smokin’, card playin’, pool shootin’, dancin’, cussin’ –
or huggin’, kissin’ and lovin’. And mister, I’m for all of them things.
~Spencer’s Mountain

In the family-centric 1963 movie Spencer’s Mountain, hard-drinkin’, hard-lovin’ Clay Spencer (brilliantly portrayed by Henry Fonda) dreamed of building his wife Olivia (the stunning Maureen O’Hara) a beautiful home on a piece of land he inherited on Spencer’s Mountain. My dream was a bit less ambitious. My dream was to take my Kim to Spencer’s Restaurant at the Mountain, “one of the all-time great restaurants in the city” according to The Infatuation, an online recommendation service. To be named an “all-time great” bespeaks of Spencer’s longevity and to the sustained love the Palm Springs dining public has for this treasure set in the historic Palm Springs Tennis Club area at the base of the San Jacinto Mountains just a few blocks west of downtown Palm Springs.

Named after the owner’s dog (an award-winning 110-pound Siberian husky), it stands to reason that Spencer’s would be dog-friendly and indeed it is. In Palm Springs, our “dog-friendly” experience has come to mean friendly diners making a fuss over our debonair dachshund The Dude. He could probably run for mayor and win (it would help that he’s almost the same height as Sonny Bono, a former Palm Springs mayor). No candidate would ever kiss as many babies (or adults) or garner as much bipartisan support (plus, his honesty is refreshingly impeccable). Two patios–one enclosed by glass but no roof–provide an outdoorsy feel with towering ficus and fig trees providing shade and natural beauty. Even without our Dude, there’d be no better place to dine at Spencer’s.

Lest, I be remiss, Spencer’s serves the very best cup of coffee we’ve ever had at a restaurant, a fragrant blend of pure indulgence and sinful pleasure. Brewed by Douwe Egberts out of the Netherlands, it’s a combination of strong Robusta beans and aromatic Arabica beans which come together in a symphony of flavor that swaddles you in a cloud of aromatic delight. Two carafes weren’t nearly enough. Though Douwe Egberts is available online, we were apprised that Spencer’s has a special (translation: expensive) brewing machine which makes the perfect cup every time.

With appetizers ranging in price from $12 to $32, Spencer’s Hot Appetizer Sampler is practically a steal–three appetizers for thirty dollars (as of the date of our visit). We’re not talking about bottom-shelf stuff, here. This is a winning troika: Chinese Style Kung Pao Calamari tossed with a cilantro sweet and spicy chili sauce, Sauteed Crab Cakes (Maryland blue crab meat with heirloom tomato, lemon butter sauce, capers and tiny greens) and Coconut Shrimp. Never have we had calamari as tender and fresh. It was wholly devoid of the rubbery quality some calamari has. Only one thing was wrong with the sauteed crab cakes and that was that there were only two of them. Only in Corrales at the home of Larry McGoldrick, the professor with the perspicacious palate, will you find crab cakes this good. The coconut shrimp was a bit on the unremarkable side, but the same could be said about virtually all coconut shrimp.

Long-time readers of Gil’s Thrilling…are probably tired of my ad-nauseum whining about the scarcity of life-altering risotto, the type of risotto which elicited a carnal response from one of George Costanza’s girlfriends. Most risotto is passable at best, but more often than not, it’s as boring as an Al Gore speech. Spencer’s gluten-free wild mushroom risotto (Aborio rice with sautéed wild mushrooms and Parmesan cheese) with grilled shrimp is the best risotto we’ve ever had that didn’t include lobster or some other ocean-based protein. When prepared well, risotto has a rich, creamy and slightly chewy texture, with each individual grain of arborio rice standing out clearly and having a hint of a bite, rather than being soft or mushy. Perhaps because preparing risotto can be a complicated process requiring painstaking monitoring, not many restaurants prepare it well. Spencer’s version is terrific!

For me, “any other white meat” is preferable to a steak. That’s especially true of pork chops. Deciding whether to order Spencer’s honey-brined center-cut pork chops or the wild mushroom risotto was a delicious dilemma. Fortunately, my Kim preempted me by ordering the pork chops which meant that with sufficient pleading, she’d share a bite or six. Considering she declared this one “the best pork chop I’ve ever had,” she was surprisingly generous in sharing an inch-thick chopped sitting on a pool of red wine demi-grace and topped with a pineapple-mango chutney all served with mashed potatoes and asparagus. Where to begin? The pork chop was moist, tender and devoid of sinew and fat. I would gladly shampoo my hair in the red wine demi-glace just so its aromas would linger. The pineapple-mango chutney prevented me from just grabbing the chop by its “handle” and devouring it like a troglodyte (or Philadelphia Eagle).

Spencer’s Restaurant on the mountain certainly earns its billing as an all-time great restaurant. From an experiential standpoint as well as a culinary revelation, it’s a restaurant we’ll long remember and one to which we hope to return.