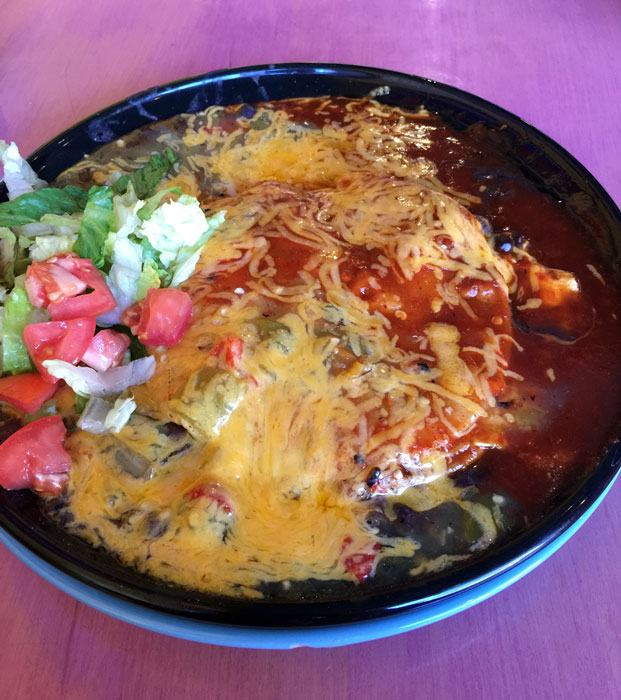 Duty-bound to make himself available to the citizenry of the fledgling United States, newly elected president George Washington spent the night in so many private homes and inns that “George Washington Slept Here” remains a real estate cliché and tourist draw centuries later. Perhaps the closest similarly celebrated landmarks in the Albuquerque metropolitan area are the filming sites for the 16-time Emmy Award-winning television series Breaking Bad. Never mind that Albuquerque recently celebrated its Tercentennial–three hundred years of history. History is not what visitors want to see. They want to see the Duke City of Breaking Bad. Albuquerque, which itself became a character in Breaking Bad, is the home of Walter White, the down-and-out chemistry teacher who metamorphosed into “Heisenberg,” the city’s meth kingpin. Five years after the series ended, pilgrimages to every Breaking Bad filming location remain a popular draw.

During my inaugural visit to Downtown Java Joe’s, a number of tourists, not all of them millennials, were snapping selfies in front of the east wall where a towering graffiti-inspired tribute to city life dominates. One of them exclaimed “this used to be Tuco’s lair.” Another chimed in, “yeah, until Walter White blew it up?” Tuco? It quickly dawned on me they were talking about Tuco Salamanca, one of the best television villains in recent memory. The exterior of Java Joe’s did indeed serve as Tuco’s sanctuary and Walter White did blow it up by throwing fulminated mercury on the floor. Thankfully, however, real life didn’t mirror that Breaking Bad episode. Tuco’s lair is certainly not in ruins. It serves as the home to Java Joe’s, one of the city’s most popular coffee shops.

Java Joe’s is located on Park Avenue one street south of Route 66. Park Avenue runs between Central Avenue at its eastern-most point to the Albuquerque Country Club at its western flank with Jesse Pinkman’s house (another Breaking Bad landmark) virtually at the center. Until earlier in 2018, its next door neighbor was Firenze Pizzeria, one of the city’s premier purveyors of pizza pie during its short tenure. The aforementioned mural is Java Joe’s most distinctive exterior feature. In a move befitting the edifice’s most notorious occupant, real-world owner Michael Phlieger once had graffiti artists paint wanted posters on that wall in response to the city’s crackdown on illegal graffiti. The current mural will probably stick around until Breaking Bad aficionados lose interest. It could be there for a long time.

Step into Java Joe’s and there are no vestiges of Tuco’s headquarters. Instead of Tuco’s thuggish henchmen, you’ll run into hipsters and hippies, blue collars and white colors, and the type of characters who put the quirky in Albuquerque. Scrawled on a black slate board above the counter where you place your order is a menu listing every daily special. Plastic menus on the counter list everything else. Walls are festooned with eclectic art, much of it for sale. Handmade lotions and soap on a table hugging a wall are also available for purchase.

Featured fare includes breakfast and lunch, sandwiches and wraps, soups and salads, pastries and beverages. With so much temptation at your beck and call, you’ll be hard-pressed to make a quick decision. Breakfast offers a full range of favorites, classics such as savory omelets and yogurt parfait to more elaborate items such as Belgian waffles with fresh strawberries and blueberry granola pancakes. Then there are the New Mexican classics such as breakfast burritos, breakfast enchiladas, huevos rancheros and even a tofu burrito. If you’re wary about a coffee shop preparing New Mexican food well, your worries will be quickly dispelled. Both red and green chiles are terrific (more on them later).

2 March 2018: Breakfast, of course, means coffee. All of Java Joe’s coffees are roasted, flavored, and blended in-house on a daily basis under the name Red Door Roasters. Daily regular, flavor and decaf brews are available. So are beans which can be purchased by the pound. Flavored coffees are flavored in-house and vary on a daily basis but are always available bulk or by the cup. Specialty drinks, which can be served hot, iced or blended, are also a good option. The Mayan mocha (double shot) is an excellent choice, a worthy approximation of my beloved red chile mocha (available only at Cafe Bella). Sans the annoying acidity of inferior coffees and the cloying qualities of designer drinks, it’s caffeinated love.

2 March 2018: Breakfast enchiladas, once a relative rarity in Albuquerque, are becoming more prevalent, a terrific alternative to the ubiquitous New Mexican breakfast burritos and huevos rancheros. Java Joe’s breakfast enchiladas features three corn tortillas layered with Cheddar, black beans and eggs smothered in red or (and) green chile. Both the red and green are terrific with the piquancy and flavor aficionados crave. After more than three decades of occasionally enjoying New Mexican cuisine laced with black beans, it still surprises me to see them on enchiladas, huevos rancheros or burritos. Pinto beans, after all, are the official New Mexican state vegetable (along with our sacrosanct red and green chile). No matter. The chile is the centerpiece of this delicious breakfast dish.

28 March 2018: Java Joe’s sandwich menu features both cold and hot sandwiches, both served with a side of pasta salad, coleslaw, or sweet potato chips. Cold sandwiches are served on multigrain, sourdough, marbled rye or baguette while the canvas upon which hot sandwiches are prepared is a baguette. No ordinary baguette is this. Texturally it reminds me of a buttery, soft focaccia with herbaceous notes. The Southwest Philly (red onions, bell peppers, green chile & provolone cheese piled on grilled Philly steak) is rather unconventional for a Philly, but it’s a good one. My sole complaint is that the green chile was so anemic I had to look for it (probably an anomaly). The coleslaw might best be categorized as “could have been” as in with a little more salad cream or maybe chopped jalapeños, it might have been better.

There’s no doubt the psychotic, bejeweled-toothed Tuco Salmanca would have had a much better disposition had he descended the stairs of his Park Avenue lair for coffee and a meal at Java Joe’s. It’s a Breaking Bad type of hole-in-the-wall which visitors might pilgrimage to out of curiosity, but they’ll return for the food, coffee and quirkiness.