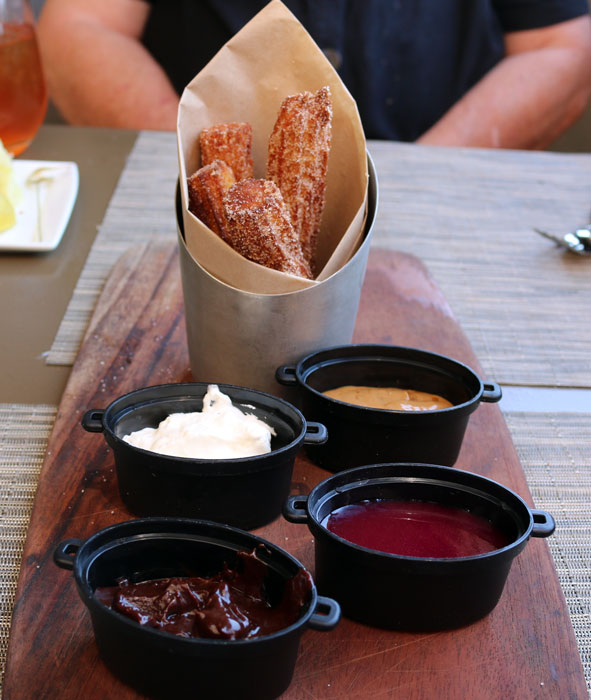 Several years ago, I asked my grandmother if she might consider aromatherapy as a treatment for the nagging aches and pains she suffered daily.  Aromatherapy, I explained was being hailed by New Age devotees in Santa Fe and Taos as a holistic healing treatment used to promote health and well-being. “Mi hijito,” she said gently, “In Northern New Mexico we are always surrounded by aromatherapy. We experience it when we bake bread in our hornos and roast chile in our comals. Aromatherapy is the petrichor of wet earth after the first rain. It’s the piñon-scented air we breathe every day.” As usual my grandmother was right. In her own way, she was telling me to let others seek a trendy panacea for life’s vicissitudes; those of us fortunate to live in Northern New Mexico had an abundance of simple, life-affirming blessings to help us heal.

Memories of my grandmother’s wisdom flooded back to me when we stepped out of the car and imbibed the piñon-scented air of the Sangre de Cristo’s rolling foothills just fifteen minutes or so from downtown Santa Fe.  The familiar early autumn aroma and freshness of the air were a balm.  So was the  quiet stillness.  It brought to mind the times I sought my grandmother’s counsel as I strugged through some existential crisis typical of teenage angst.  She would remind me  to look for God in a still, small voice (from one of her favorite Bible passage (1 Kings 19:12)).

Nestled gently on 57 acres, the resort offers its guests incomparable views of three mountain ranges, ebony skies punctuated by glittering stars, spectacular multi-hued sunsets and lush juniper and aspen groves. Moreover, it offers a profound seclusion and tranquility that gives rise to contentment and unleashes the imagination. We had been told that if we listened attentively, we would hear the faint echoes of the spirits of sojourners and dwellers past. Alas, the Native Americans, Spaniards and Anglos of yore were in solemn repose on the date of our visit. In their day, they experienced vistas unspoiled by modernity. Contemporary man gazes instead at the harmonious interplay of luxurious accommodations backdropped by towering mountain peaks rendered cyan by a cobalt canopy of sky.

More than most resorts, Four Seasons Resort Rancho Encantado Santa Fe is respectful of its surroundings, preferring to blend in with them instead of razing them.  The result is a setting that’s both undeniably romantic and luxurious.  Luxury, however, doesn’t mean just lolling around the pool or indulging in a pampering spa treatment. The resort offers many opportunities for high desert adventure whether it be hiking, mountain biking or cultural tours to such historic sites as Bandelier and Georgia O’Keefe’s Ghost Ranch in Abiquiu.

The resort’s website boasts of “The flavours of northern New Mexico”  being “ on display at our signature, fine-dining restaurant, where global influences meet regional delights – and the food on your plate is every bit as inspiring as the mountain views seen just outside.”  That’s a lot to live up to and Terra does.  Since 2009, Terra has been a AAA Four Diamond honoree, a distinction accorded to only 2.1 percent of the more than 31,000 restaurants considered.  The AAA Four Diamond rating is based on a combination of the overall food, service, décor and ambiance offered by the establishment.

For many of us, ambiance translates, at least in part, to romantic.  Just in time for Valentine’s Day 2018,  Food & Wine published its list of America’s most romantic restaurants. In its estimation, Terra is as romantic as it gets–the Land of Enchantment’s most romantic restaurant.  The cynosure of the capacious dining room is a wood-burning fireplace which helps amp up the romance on cold winter nights.  Weather permitting, the best seats in the house are on the dog-friendly patio where views and aromas of the piñon-studded hills beat air conditioning anytime.

Our inaugural (and long overdue) visit was on a sweltering summer day when we were suffering from cabin fever of a sorts and needed an escape to a healing haven.  Terra was all that and more.   As usual, The Dude, our debonair dachshund, received the celebrity treatment from our hostess and the amiable waitstaff.  We got the best seats on the expansive patio.  After a quick perusal of the a la carte menu, the views from the patio helped us overcome the sticker shock of a $33 per entree brunch.  Fortunately, the lunch menu has a somewhat more palatable price point.

“Made in Santa Fe” is the section of the menu in which you’ll find what are ostensibly the most New Mexican items on the menu: tortilla soup, Christmas enchiladas and New Mexico posole.  The hearty, soul-warming  tortilla soup is among the very best we’ve had, rivaling the transcendent tortilla soup at Luminaria.  It’s both artistic in its presentation and delicious in its delivery though at first glance, it could be mistaken for a simple tomato soup “lagoon” with a timbale shaped “island” near its center.  That island is a conical-shaped mound of avocado, chicken, fire-roasted corn, cilantro and lime crema.  Distribute that island cross the soup and its flavor profile changes completely.  It becomes a rich, creamy and deeply satisfying elixir tinged with red chile and only the occasional tortilla bit.

For my carnivorous Chicago born-and-bred bride of 33 years, steak remains the pinnacle of fine dining.  If it’s not available in its conventional chop configuration, she’ll take it any way she can.  Terra’s flat iron steak salad (baby spinach, crispy shallots, cucumber, tomato, chimichurri with a light drizzle of whole grain mustard dressing served with baby potatoes) is a terrific option.  My Kim was wary of the whole grain mustard dressing, but perhaps channeling my grandmother’s wisdom, I urged her to “trust the chef.”  The chef (Kai Autenrieth) certainly knows what he’s doing.  The dressing was mild, only faintly hinting of the nasal-clearing acidity often ascribed to whole grain mustard.  It paired very well with the fresh chimichurri.  The steak, several sumptuous medallions prepared at medium, was tender, seasoned well and generously portioned.

“Trust the chef” was my response to Edna, our effusive server, when she asked my preferred degree of doneness for Terra’s Signature Burger (candied chile bacon, smoked Gouda, homemade pickles, green chile, roasted garlic avocado spread).  My burger arrived at medium-rare which would have been my choice anyway.  There are so many elements in this burger which stand out.  The crispy candied chile bacon is a star.  It’s how all bacon should be made.  The hand-formed, fresh beef patty was well seasoned nd reminded us of a good steak.  The green chile wouldn’t register especially high on the Scoville scale for piquancy, but it had a good roasted flavor.  The buns held up against the juiciness of other ingredients.  All too often the element I miss most on burgers is a simple yellow mustard (especially when burgers are adorned with some sort of garlic aioli).  Not so at Terra where the roasted garlic avocado spread had some of the acidity of mustard with the richness of avocado.   This is one of the very best burgers I’ve had in 2018.

Legend has it that churros, the crunchy, deep-fried sweet snack which originated in Spain, got their name because they resemble the horns of the churro sheep. More fritter than donut, these cylindrical, sugar-sprinkled fried pastries transcend borders and socioeconomics. In Spain, they’re a popular breakfast treat, one which goes so well with hot chocolate spiced with cinnamon. South of the border—from Mexico to Argentina–they’re often sold by street vendors. North of the border, they’re as popular in high-end restaurants as they are in food trucks, carnivals and fairs. It didn’t surprise us to see Los Churros on the dessert menu at Terra.  Four churros are served with a quadrumvirate of decadent dipping sauces: vanilla, Mexican chocolate, prickly pear and piñon dulce de leche.  All are fabulous!

Whether it was because of The Dude’s irresistible charm or because Terra’s staff is  friendly and accommodating to all guests, we were treated like royalty.  Everyone from the bussers to the restaurant manager visited our table and ensured to our comfort.  In our eyes, Terra earned its  AAA Four Diamond rating just for its service, ambiance and incomparable views.  Terra also earned rave reviews and plaudits from two very satisfied and happy diners and their delightful dachshund.

Terra at Four Seasons Resort Rancho Encantado easily earns its reputation as a dining diadem, one of the very best restaurants in the Land of Enchantment.