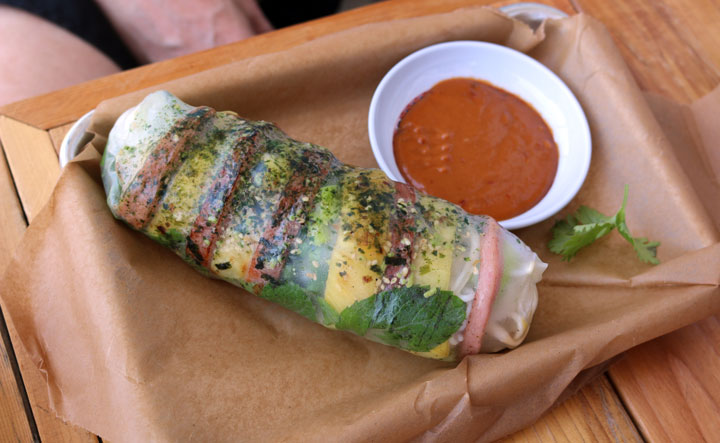 “Nom nom.” It sounds innocent enough. Parents–yes, including parents of four-legged fur babies–utter it in baby talk intonations to get our children to eat something, especially when that something is “good for them” but doesn’t actually look or taste good. Nom nom was, of course, the favorite expression of Sesame Street’s Cookie Monster (Hi Darren) as he ravenously devoured a plate or six of cookies, a fusillade of crumbs flying from his chewing mouth.  Grade school teachers use nom nom as an example of an onomatopoeia, a word that imitates a sound.  My friend Michael Gonzales, the dynamic owner of Rio Rancho’s Cafe Bella uses it to describe great new restaurant finds. English majors recognize it as an expression used to convey pleasure at eating or at the prospect of eating.  It’s also a verb meaning “to eat something, typically with great enjoyment.”

See anything wrong with the term nom nom?  Though it may never grace Gil’s Thrilling… in a descriptive manner, I don’t see anything wrong with it either.  So, if it sounds innocent and innocuous enough, why does the Huffington Post rank the word nom nom with “moist” as “the worst offender of words when it comes to food or the English language in general.”  How can it possibly creep out anyone that much?   While the Huffington Post declares “when it comes to the use of nom nom, and our bubbling hatred for it, we almost feel like we don’t have to explain ourselves,” explain themselves they do.  “Nom nom is what the Cookie Monster says. And while we have a soft spot for this cookie glutton, he wasn’t the brightest crayon in the box. So why in the world would we want to start talking like him?   Worse, “In our opinion, the use of the phrase nom nom is as offensive as partaking in baby talk. You just shouldn’t do it.“

At least the Huffington Post didn’t spew its rancor without positing constructive alternatives–“a bazillion (or 39) other words you can use in its place: ambrosial, appetizing, choice, darling, delectable, delicious, delightful, delish, enjoyable, enticing, exquisite, fit for king, good, gratifying, heavenly, luscious, lush, mellow, mouthwatering, nectarous, nice, palatable, piquant, pleasant, rare, rich, savory, scrumptious, spicy, sweet, tasteful, tasty, tempting, titillating, toothsome, well-prepared, well-seasoned, yummy and even divine.”  As with nom nom, all of these words are innocuous enough, but you can bet someone somewhere will take umbrage with one or more of them.  That’s the age in which we live.

After my inaugural visit to Albuquerque’s Cafe Nom Nom, I actually tried out some of those alternative words for the delightful Vietnamese fusion restaurant which had just captured my affections:  “Cafe Nectarous.  Cafe Palatable.  Cafe Titillating.  Cafe Toothsome.”  Nah, none of those fit.  Cafe Nom Nom does.  It’s entirely possible an utterance or two of “nom nom” or some derivative thereof escaped my mouth as I thoroughly enjoyed the deliciousness set before me.  Despite contentions to the contrary, it’s unlikely the Huffington Post would have expressed similar satisfaction with one of their anointed bazillion alternatives.

Cafe Nom Nom opened its doors in June, 2018 at Nob Hill’s five points intersection of confusion and chaos that is Monte Vista, Central and Girard.  It occupies the space which previously housed Kitchen Se7ven and Kaktus Brewery Tap and before that Amore Neapolitan Pizzeria and Bailey’s on the Beach.  Its neighbors include The Shop and Taco Bell.  Cafe Nom Nom doesn’t have the most eye-catching signage.  In fact, it’s downright difficult to read.  Much more prominent is signage for Studio N, a hair salon next door.  Somehow, intrepid foodies have managed to find it and the initial buzz has been scintillating.

Cafe Nom Nom is the inaugural restaurant venture for Studio N owner and “celebrity stylist” Nam Tram who did all the carpentry work–including counters and tables–for his rustic little restaurant.  The interior look and feel pays tribute to his mother’s homeland, displaying traditional Vietnamese attire and a conical leaf hat.  There are three flat screen televisions positioned so that diners have a vantage point to at least one.  A small, sun-shielding dog-friendly patio is available at ground level, but the expansive rooftop patio is the place to be.  It offers exquisite city views as well as spectacular sunset panoramas.

Seating is mostly on two-tops (tables for two) which can be easily moved to accommodate larger parties.  Tableside service isn’t available nor are there overhead menus for your perusal, but great staffers like Maddie will help you out.  You’ll place your order at the front counter from a laminated three page menu.  It’s an intriguing menu, one which warrants a lengthy perusal so don’t hesitate to take it to your table so you can contemplate the  thrilling prospect of very interesting fusion cuisine.  Though Cafe Nom Nom bills itself as an Asian fusion restaurant, at its heart it’s a Vietnamese restaurant which borrows some elements from its neighbors in Southeast Asia and even from the Land of Enchantment.

On the first page of the menu, you’ll find spring rolls unlike any you’ll find in the Duke City.  These spring rolls have a creative element similar to what so many Americanized sushi restaurants offer.  For example, the Mango Monkey is replete with black and tan sesame, mango slices, Thai basil and several other ingredients.  Spring rolls are about the size of an overstuffed burrito.  That reminds me, the menu also offers a “Phoritto,” essentially pho ingredients wrapped up in a giant tortilla and served with a pho dipping sauce.  Not only does the menu showcase a traditional banh mi, there’s a banh mi burger, too.  You’ll also find pho with your choice of a chicken, beef or vegetarian broth.  Desserts include grilled watermelon with sea salt, lime and a side of green chile kimchi (not to be missed).

26 July 2018: Stack two or three of Cafe Nom Nom’s spring rolls and they might be mistaken for a cord of firewood.  These are steroidal spring rolls, at least the size of an overstuffed burrito.  They’re meant to be shared.  The most traditional spring roll on the menu is the Saigon Roll (Thai basil, cilantro, green onions, cucumber, bean sprouts, romaine lettuce, green chile kimchi, shrimp and pork).  Though the menu indicates it’s served with a Vietnamese lemongrass dipping sauce, my Saigon roll was accompanied by maybe the best peanut sauce I’ve had in Albuquerque.  Unlike some (especially Thai) peanut sauces which are as cloying as a Reese’s peanut butter cup, Cafe Nom Nom’s version has a piquant personality courtesy of an infusion of chile.  The spring rolls are so large, you’ll easily go through two portions of the dipping sauce.  These spring rolls are quite good though as is my complaint about all spring rolls is that the Saigon Roll could have used more shrimp and pork.

26 July 2018: The unique fruited plain meets Vietnam concept of a banh mi burger has always intrigued me.  How can the fusion of pickled vegetables and traditional burger fixings not be absolutely fabulous?  Cafe Nom Nom’s rendition is constructed from  freshly ground in house (at least a quarter pound) layered with crisp romaine lettuce, vine-ripe tomatoes, Thai basil, mint, cucumbers and cilantro topped with the housemade green chile kimchi between a locally baked pretzel bun.  The banh mi burger is served with extra crispy panko-crusted  fries and Indian curry ketchup.

Banh mi aficionados will notice the absence of pickled daikon, one of my favorite ingredients, but the optional farm-fresh duck egg certainly more than makes up for it just as the green chile kimchi easily makes up for the absence of jalapeño slices.  This is a terrific burger, one so large my mouth wasn’t large enough to bite into it without extricating some of the ingredients (lettuce and tomato).  Still, I had to wonder if it might have been even better as a green chile kimchi cheeseburger.  Hmm?  Mustard and ketchup need not apply for a place on this burger which is perfect just the way it is.  The panko-crusted fries are excellent.  So is the Indian curry ketchup (reminiscent of the one served at Kaktus).

26 July 2018: The eyes and ears of chile-loving New Mexicans will perk up at the mention of green chile Kimchi, a New Mexico meets Korea masterpiece made on the premises with Hatch Bueno green chile.  While kimchi is most closely associated with Korean cuisine, it’s also quite popular in Vietnam.  Aside from green chile, Cafe Nom Nom’s rendition is made with fermented cabbage, shredded carrots, garlic, red onions and other personality-packed spices.  It’s not nearly as piquant or lip-pursing tart as other kimchi, but it’ll get your attention.

28 July 2018: During my second visit, we were joined by affable Alonna Smith and her erudite husband Eric, Philadelphia transplants who have really taken to the Duke City dining scene.  Though humidity was at double digits, a light breeze made our al fresco experience on the dog-friendly patio very pleasant–especially for our debonair dachshund The Dude who flirted with Alonna for the duration of our meal.  There was easy consensus among the four of us that the steamed BBQ pork buns and the accompanying peanut sauce were excellent.  Steamed BBQ pork buns are a classic Chinese dim sum offering showcasing steamed risen flour dumplings stuffed with pork slathered in a sweet barbecue sauce.  They’re understandably very popular in Vietnam, too.  Cafe Nom Nom’s version are of dim sum restaurant quality.

28 July 2018: Alas, the one dish we expected to shine most wasn’t quite up to par.  Worse, it was the national dish of Vietnam, a sacrosanct soup which has also captured the affections of savvy diners across the fruited plain.  The saving grace for the swimming pool-sized bowl of pho we shared would have been more than a little desalinization.  An excess of salt rendered mediocre what would otherwise have been a very satisfying, nicely seasoned soup.  The salt permeated the grilled beef and noodles, sparing only the scallions and red onions.  It’s entirely likely oversalting the pho was an anomaly and your experience may be different.

28 July 2018: Intended to be salty is a uniquely Vietnamese dessert, grilled watermelon with sea salt and lime served with a side of green chile kimchi.  Alonna noted that the grilling imparted a delightful smoky quality to the watermelon and indeed, that smokiness was a highlight, but so was the freshness of the watermelon.  Where are people finding good watermelon in the metropolitan area?  Every watermelon we buy seems to be mealy and not at all sweet.  Eric declared the green chile kimchi “interesting” but didn’t have a problem with its piquancy.

Despite the Huffington Post’s proclamation about the term “nom nom,” there really can be no better name for this little cafe on the fringes of Nob Hill.