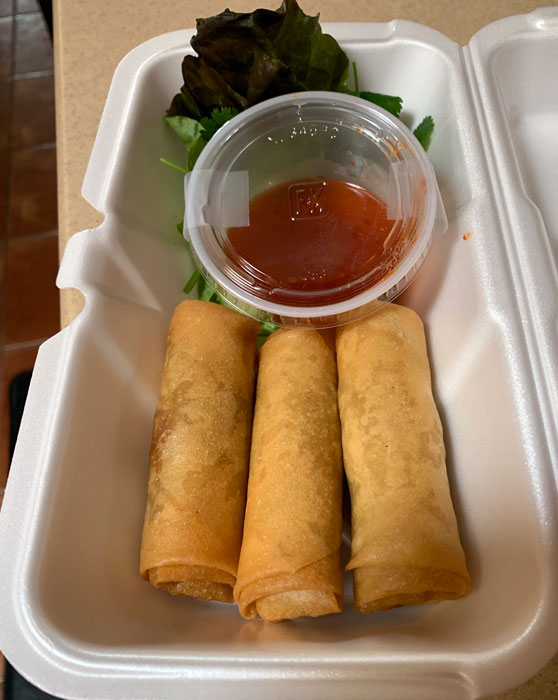 Jim Millington, a long-time friend of this blog, contends that “there must be a bad Vietnamese restaurant somewhere on this wide earth but I have never found it.”  If the Albuquerque metropolitan area is a microcosm of this wide Earth, Jim may just be right.  Just ask Yelp reviewers, a blatantly honest bunch which doesn’t pull punches when expressing dissatisfaction about restaurants that just don’t measure up.  From among the 35 Vietnamese restaurants listed on Yelp with more than a handful of votes, one is rated 5 stars, 16 have a rating of 4.5 stars, 12 are rated 4 stars, one is rated 3.5 and at the bottom of the pack is Viet Noodle which has a 3.0 rating.  Even those not rated 4 stars or higher have their staunch supporters.

Jim’s comment and the phalanx of Yelp reviews got me thinking (hence the plumes of smoke emanating from Rio Rancho).  It’s gotten to the point that you can take for granted when you visit a Vietnamese restaurant that you’ll be served solid, if not spectacular food; that service will be cordial and professional; that prices will be reasonable, if not downright inexpensive and that you probably won’t discover any life-altering dish.  The latter point brought out the caviler in me so forgive my contention that maybe it’s no longer enough to be just “good” to “very good.”

My own realization that there’s so much more to Vietnamese restaurants than pho came after having consumed several swimming pools worth of the elixir.  Though virtually every bowl was a soul-warming blanket of comfort and goodness, none had truly memorable qualities.  “Blasphemy”, you say, “pho is the national dish of Vietnam, a comfort food favorite that has captured the affections of diners the world over.”  No one can argue that the fragrant anise-kissed broth poured over a bed of fresh rice noodles topped with a handful of herbs and succulent sliced meat is pretty darned good, but should it be the first (and sometimes only) dish diners think of when pondering Vietnamese cuisine?

The Culture Trip, a self-professed “global hyper-growth startup operating in travel, media and entertainment” agrees with my contention and went so far as to publish a list of 12 Vietnamese Dishes That Are Better Than Pho.  Frankly, my own list would have included more than a dozen better alternatives.  If you’re wondering whether my taste buds are in a rut after “having consumed several swimming pools worth of pho,” please understand this is not a case of familiarity having bred contempt (I still love a great pho).  It’s more a matter of having discovered a plethora of pleasurable alternatives to the sacrosanct pho.

Among them is Bun Bo Hue, a Hue-style beef noodle dish also listed on The Culture Trip’s anointed twelve.  My discovery of this dish dates to the mid-1990s, preceding the epiphany Anthony Bourdain had about this very same dish.  During a Parts Unknown visit to the Central Vietnamese city of Hue, the ever quotable raconteur who loved everything Vietnamese declared, “In my way of thinking, in the hierarchy of delicious, slurpy stuff in a bowl, bun bo hue is at the very top.”  Then, as if to emphasize the point, he stressed, “I would definitely bring a date for [bun bo hue]. Because if she doesn’t like this, there’s no hope of a relationship. If she said, ‘Oh, I don’t know, there’s blood and stuff in there,’ that would be a relationship-ender to me. I’m not kidding.”

Bun Bo Hue is going out and hunting treasure in Oak Island versus pho’s staying home and reading about it.  The truth is most pho does have a very consistent “been there, done that” familiarity.  Hue style spicy beef noodle soup, on the other hand, has more depth of flavor and is more unpredictable in terms of its heat and spice levels.  The next time you dine at a Vietnamese restaurant, instead of your usual predictable, comforting bowl of pho, go for broke and give Bun Bo Hue a try.  There’s a chance it’ll become your new favorite Vietnamese staple.

While you’re at this adventurous “thing,” try Bun Bo Hue at a Vietnamese restaurant you’ve never before visited.  Maybe somewhere like Pho Kobe Vietnamese Cuisine which opened its doors just before the advent of 2019.  Pho Kobe is located within the strip mall on the northeastern side of the Alameda and Corrales Road intersections.  If you’re wondering whether the restaurant’s name is indicative of the restaurant using Kobe beef, it doesn’t. Kobe is the name of one of the restaurant owners though we were told the restaurant hasn’t discounted using Kobe beef in the future. Don’t let a “lesser” beef dissuade you from trying what may become one of your favorite Vietnamese Restaurants.

Unlike the compendium-like menus at several other Vietnamese restaurants in the metropolitan area, Pho Kobe’s menu is rather sparse. A handful of appetizers precedes a section on the menu entitled “breakfast & lunch” which lists six banh mi sandwiches (both banh mi and pho are very popular breakfast dishes in Vietnam). There are five soups on the “Pho” section of the menu, including the aforementioned and much-lionized Bun Bo Hue. You can also find a small number of com (rice) and bun (vermicelli noodles bowl) dishes. Deep-fried spring rolls are a nice way to start your meal. Within characteristically thin, light and crispy wrappers, you’ll find minced pork, noodles, mushrooms and deliciousness.

Predictably, during our inaugural visit, my Kim went the safe route with the special noodles pho (rare steak, beef ball, soft tendon, flank brisket) and Mr. Adventurous took the soup less traveled, the Bun Bo Hue. Predictably, both were exemplars of what they were supposed to be. The pho was redolent with anise, the Bun Bo Hue with lemongrass. The pho was smooth and soothing like a Lou Rawls song. The Bun Bo Hue was assertive and spicy, more like Barry White. Both were delicious and on a cold, wintry January afternoon, both did their jobs well.

Also predictably, Pho Kobe falls somewhere within the spectrum of “good” to “very good,” a landing place in which most Vietnamese restaurants seem destined. Maybe that’s not such a bad thing after all.