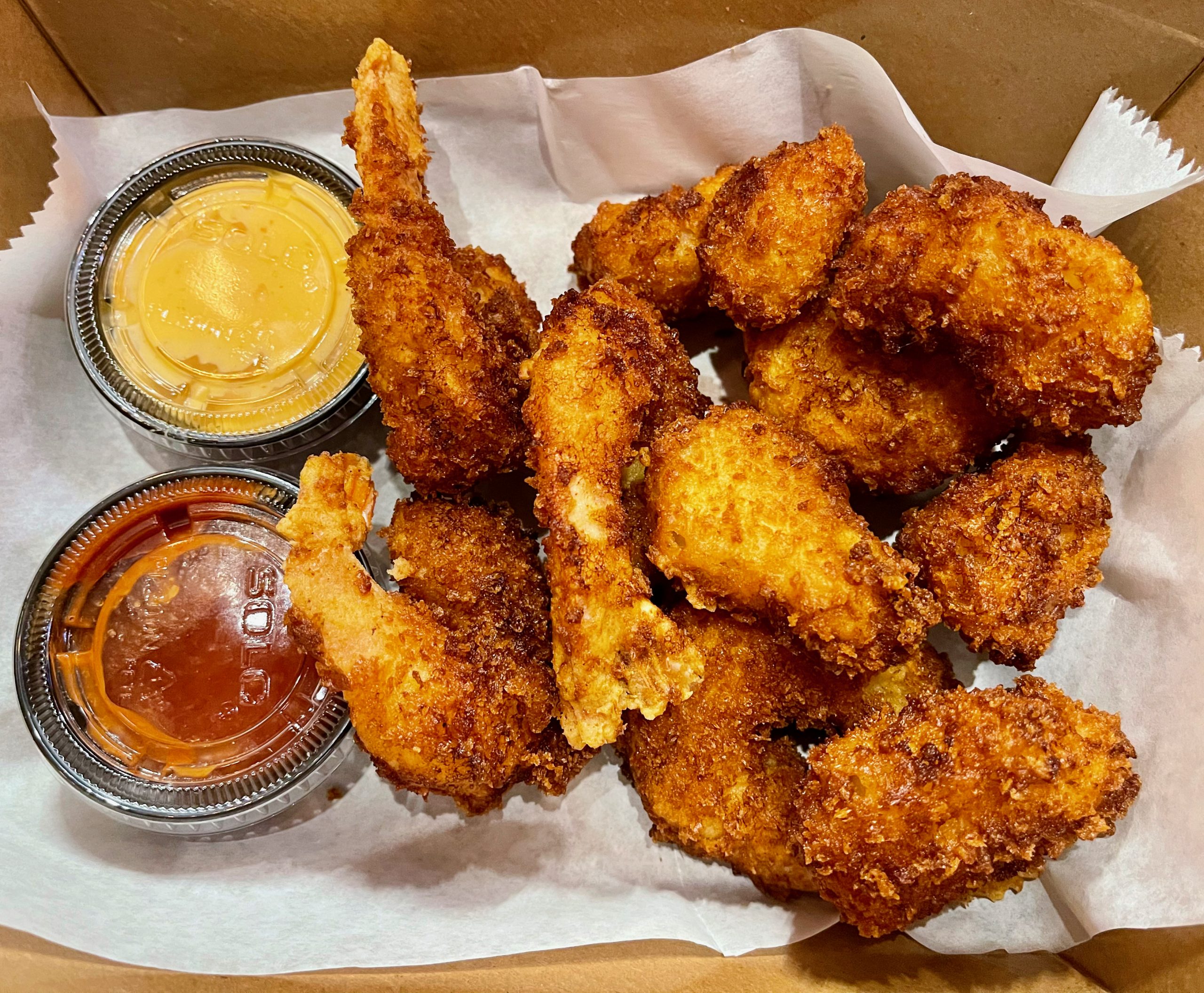 As children growing up in landlocked and agrarian Peñasco, my siblings and I led a very sheltered life. Our extremely provincial experience with “seafood” was limited to Mrs. Paul’s fish sticks which we dipped in Kraft’s sandwich spread (we didn’t know about tartar sauce) and (gasp, the horror) Mrs. Paul’s fried shrimp. Sure, we snared the legal limit (yeah, right) of German brown trout, cutthroat trout and rainbow trout in the cold, rocky waters of the mountain streams in our backyard, but that wasn’t “seafood.” That was fish!

One commonality among the “seafood” and even the “fish” we experienced was that it was all fried. Okay, so the Mrs. Paul’s seafood was already breaded and fried when we removed it from its hermetically sealed container. All we had to do was put it on a baking pan and bake it “until crispy and browned.” Despite my mom following the instructions on the box, both the fish sticks and shrimp had a mushy and oily texture. It certainly didn’t have the wonderful mouth-feel of the fish she fried for us.

One memorable school trip to the “big city” of Albuquerque included a visit to Sizzler, a “fancy” steakhouse chain that would later become fodder for Jay Leno’s comedic monologues.  Instead of indulging in a hand-cut rib eye or sirloin, my choice was fried shrimp.  Not only was it was much better than Mrs. Paul’s mushy shrimp, it was somewhat larger, the result of having been butterflied and presented like a small, spatchcocked chicken.  By itself the shrimp left me unimpressed, but the cocktail sauce–enlivened with incendiary horseradish–was addictive.

With a very limited frame of reference from which to go, I was determined to someday sample seafood in all the ways it could be prepared.  Thankfully the Air Force accommodated my adventurousness and sent me to Hanscom Air Force Base northwest of Boston.   Scant miles now separated me from seafood so fresh it had been swimming in the cold Atlantic waters mere minutes previously.  Like a hungry rat scavenging the fairgrounds after a busy day, I explored Boston’s manifold seafood restaurants and found a veritable smorgasbord-orgasbord-orgasbord.   Moreover my explorations revealed that seafood–shrimp, lobster, oysters–didn’t have to be fried to be absolutely delicious.

When we studied the Salty Catch menu, memories of my nascent experiences with seafood came flooding like the Rio Grande during the runoff following heavy snows.  Save for clams (bellies, of course), fried seafood may be my least favorite way of enjoying seafood.  Still, when you’re in the landlocked Land of Enchantment, you take seafood any way you can get it and Salty Catch specializes in fried seafood.  Save for gumbo, all seafood entrees are fried…and as we were quick to learn, that’s not necessarily a bad thing.

Salty Catch is one of several tenants at the Sawmill Market, New Mexico’s first artisanal food hall. Located in a former lumber warehouse in Albuquerque’s Sawmill District, the Sawmill Market opened its doors just as COVID-19 was shutting the world down.  Along with Salty Catch are such vendors as Blue Door Patisserie, XO Waffle, Paxton’s Tap Room, Flora Mexican Restaurant, Botanic Bar, Eldora Chocolate, HAWT Pizza Co. and Tulipani Pasta.  Each vendor operates in a space not much larger than a concession stand at a high school gymnasium.  Space not withstanding, the aromas wafting from some of the vendor spaces belies their Lilliputian digs.

The Salty Catch menu is rather abbreviated, too–two soups, a lobster po’ boy, fried seafood basket, fish and chips, fried shrimp basket and French fries.  That’s it.  Not quite a netful, but quite tempting.  My choice was the fried seafood basket (lobster tail, shrimp, and a large scallop with a spicy cocktail sauce and sriracha aioli), a veritable bounty of Neptune’s finest.  It’s a vast understatement to say it didn’t look or taste like either Mrs. Paul’s or like Sizzler’s.

For one thing, the coating was much thicker and more coarse (maybe Panko-based) offering a delightful crunch.  For another, the shrimp weren’t butterflied and were nonetheless exemplars of the oxymoronic term “giant shrimp.”  Four large shrimp were nearly as sizeable (and much more satisfying) as an entire plate of Mrs. Paul’s shrimp.  The shrimp were quite good with either the spicy cocktail sauce or sriracha aioli.  Before enjoying fried lobster tail at the world-famous Woodman’s of Essex in Massachusetts, we thought it criminal to deep fry lobster.  It’s still not our favorite way to have lobster, but Salty Catch’s version is quite nice–not seaside nice, but very good for New Mexico nice.  The one large scallop was good enough to make us wish there were several more where that came from.

For my Kim, our trips to Massachusetts have been the pescatarian pursuit of lobster.  She’d have it for breakfast, lunch and dinner if possible.  That made Salty Catch’s lobster po’ boy (soft baguette with fried lobster tail, lettuce and tomato, topped with spicy cocktail sauce and sriracha aioli served with seasoned fries) a no-brainer.  She may as well have asked solely for the fried lobster tail (curiously cut into bite-sized pieces resembling hushpuppies) as she quickly discarded all but the lobster.  Even sans sauces, she declared it not Woodman’s good, but very enjoyable.

Under the “Soup” menu, Salty Catch offers shrimp gumbo and chicken andouille gumbo.  That was interesting to us because in our eight years living on the Mississippi Gulf Coast we never heard of gumbo referred to as soup.  If the spoon fits…  Also interestingly, the gumbo was brimming with coin-sized andouille while scrimping on chicken.  Heavy-handedness with hot sauce detracted from other flavors we would have preferred to focus on.  We also missed a slice or six of French bread.

Salty Catch may not be near the ocean, but it offers the ocean’s bounty in a very enjoyable venue where with a little imagination you can hear seagulls flying overhead and smell the salty breeze.