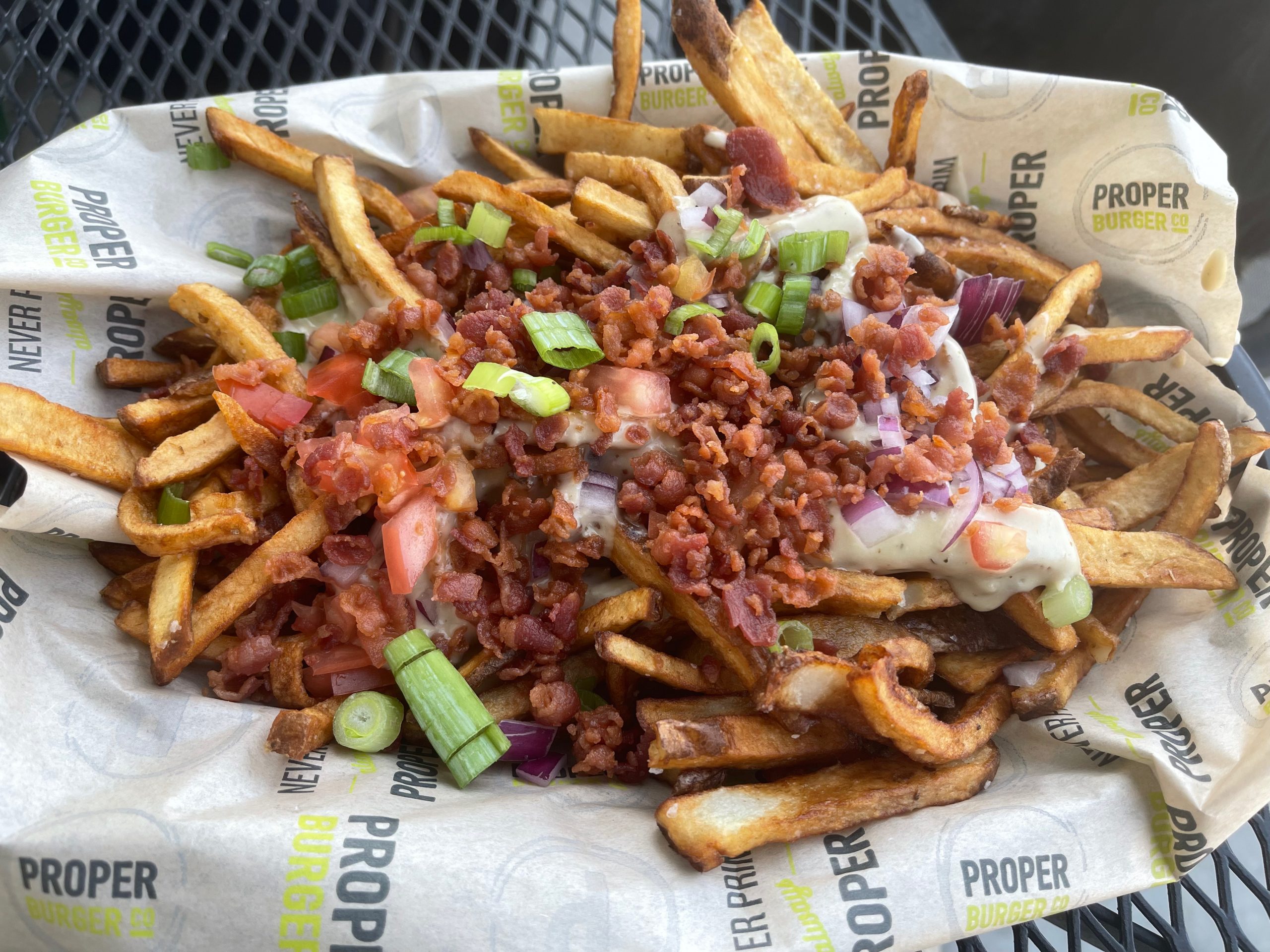 Television would have you believe Mars and Venus have different ideas as to what constitutes the proper way to eat a burger.  Representing Venus (women), as depicted in a Wendy’s commercial from the 1980s, is a geriatrically advanced woman who takes a small bite of her juicy burger then daintily wipes off the detritis with a napkin.  Representing Mars (men) is Food Network superstar Guy Fieri.  The platinum-coiffed restaurant impressario’s approach to properly eating a burger is mirrored by most of us Martians.  It’s not for the faint of heart or children and you shouldn’t attempt it without a net.

If the burger is what some of us more seasoned folks might call a “Dagwood” (characterized by its skyscraper height and multiple layers of meats, cheeses and condiments), Fieri will first assume the position–what he calls the “hunch.”   First you put your burger on the counter and stand in front of it with your chest about twelve-inches from the edge of the counter.  Lean forward so that your chest is at a 45-degree angle to the counter.  Cradle the burger with both hands, resting your elbows on the counter.  Angle the sandwich at a 45-degree angle to the counter with the top end towards your mouth.  Eat and enjoy.

It’s at the eating part of the proper way to eat a burger that Fieri excels.  Watching him bite into a burger is reminiscent of Bruce, the great white shark from the movie Jaws.  No matter the size of the burger, Fieri can fit at least half of it in his mouth.  You’d better not be in close proximity or flying shrapnel is likely to spray you.  Nor is Fieri’s two-tone goatee spared the rabid wolverine-like assault on the burger.  In short order that goatee is covered in gloppy, goopy, messy burger fixings.

In a season 29 (2018-2019) of Diners, Drive-Ins and Dives, Fieri visited a Salt Lake City beer and burger institution named Proper Burger Co. in which he demonstrated the Martian way of properly eating a burger.  Fittingly the episode was called “Happy Helpings” because (unlike a certain chain’s claim) it takes two hands to handle a Proper burger properly.  The program didn’t indicate whether or not Fieri sloshed down the eatery’s beer with the same enthusiasm he showed for the burger.

Proper Burger actually started off as Proper Brewery and continues to pair its award-winning libations with one of the city’s most highly regarded burgers.  Inventiveness and originality are the hallmarks of the burger menu.  You need not have your burger constructed with Proper’s fresh, never frozen beef patty, a full third-pound.  Substitute a chicken patty or a vegan patty if you’d like.  Toppings–sauces, cheeses, veggies and other condiments–are top quality as is the beer-based sauce.  The menu also lists salads, grilled cheese, fries, onion rings and chili.  Fieri describes Proper Burger as “first rate.”

If you think “rarebit” is the way Gomer Pyle pronunces rabbit, you’re not too far off.  Rarebit (or Welsh rabbit) contains no rabbit.  Rarebit is essentially a thick sauce of cheese, beer and spices spread on toast–or at Proper Burger, spread on fries or on a burger.  The rarebit fries (bacon, house beer-cheese rarebit sauce, whole grain mustard, tomato, red onion) are messy and delicious, but you risk being rendered comatose if you and your dining companion(s) finish the mountainous portion.  By themselves the fries are superb.  They’re thin-cut, just a bit flaccid and nicely salted.  With their toppings, they’re elevated to something special.

One of the most “basic” or relatively “naked” burgers on the menu is what my Kim asked for.  Fittingly it’s called the Johnny Utah (house-smoked turkey pastrami, American cheese, Russian dressing, coleslaw, zucchini pickles).  If it sounds just a little bit like a Reuben, that’s by design.  Surprisingly among the star ingredients on this burger behemoth are the zucchini pickles, so good we’ll try to duplicate them at home someday.  Another star is the challah-like buns, sweet and tender though so thick they might overwhelm a single patty.  The turkey pastrami is lean and peppery.

My burger choice was the Mushroom Swiss (sauteed mushrooms and onions, Swiss cheese, horseradish-paprika sour cream) with a side of “fry sauce.”  I first learned about fry sauce from my dear friend Becky Mercuri’s Great American Hot Dog Book.  She describes it as “similar to a smooth Thousand Island dressing…a combination of ketchup and mayonnaise.”  Neither the horseradish-paprika sour cream nor the fry sauce distinguished themselves as something that should be imported to New Mexico though we kept thinking most of the Proper Burgers would shine with green chile.

Proper Burger is a perfectly proper (but never prim according to the restaurant’s motto) place for Venutians and Martians to enjoy truly inventive and delicious burgers.