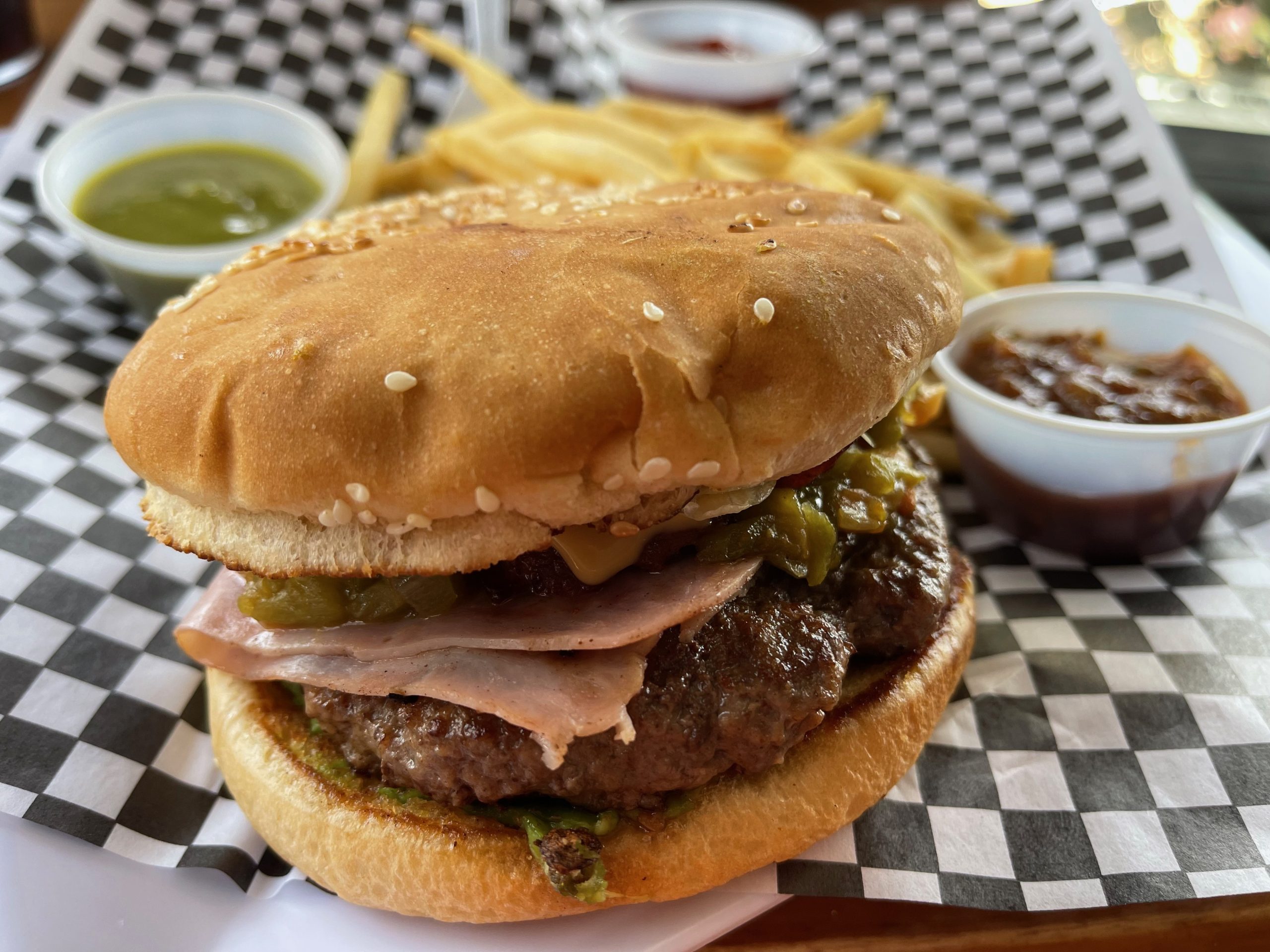 Such advanced human traits as complex symbolic expression, art as an aesthetic visual form and elaborate cultural diversity emerged mainly during the past 100,000 years or so.  That’s more than four-million years after humans gained the ability to walk on two legs. By comparison, the ubiquitous All-American burger has evolved in the blink of time.  Most culinary historians believe the burger as we know it today was invented somewhere between 1885 and 1904. Even most of us who have lived three or more decades have seen significant changes in the burger.  Many of those changes have occurred during the 21st century–the last twenty years or so.

Think about it.  For the most part, the predominant burger many “seasoned” eaters across the fruited plain enjoyed until recent years was relatively unadorned save for the burger’s essential and defining elements: a soft, toasted bun (sesame seed buns were popularized by the Golden Arches in the 60s); sweet, vine-ripened tomatoes; crisp, cool, crispy lettuce; a smear of pungent yellow mustard; maybe some chopped white onions and in the middle of it all, a juicy, seasoned all-beef patty.  To be sure, additional ingredients–cheese in the 1920s or 1930s and in New Mexico, green chile in the 1940s–eventually became de rigueur.

The 1960s saw the rise of “special sauce” at McDonald’s and Thousand Island-like imitators at other chains and even independents.  The Age of Aquarius also saw the dawning of the bacon cheeseburger, beautiful strips of fried pork candy paired with unctuous cheese.  In the 1980s, the veggie burger arrived and with it meat-free alternatives for vegan burger-holes.  Then in the 21st Century, the “gourmet burger” transformed–uplifted, revitalized, revamped, etal…–the burger.  With the advent of gourmet burgers, the grey discs of mystery meat and “pink slime” that once desecrated far too many burgers were replaced by high-quality, mouth-watering beef patties seasoned and prepared to your exacting degree of doneness.  Burgers are now gloriously adorned with exorbitant toppings that have upped the cost of the once inflation-proof burger and transformed it–in many cases–from filling fast food to fabulous fine-dining.

Perhaps lost (or more likely uncredited) in the celebration of gourmet toppings bedecking the double-decker burger is the Mexican burger, a colorful creation as spirited and exhilarating as the Land of Montezuma itself.  In Mexico, burgers are celebrated in the spirit of “no te rajes” or “don’t chicken out.”  It’s not so much an “anything goes” approach as much as it is a recognition that you shouldn’t be hesitant to try something new or different.  As for that Bobby Flay assertion that “if you put too many things on a burger, all of the flavors start to get muddled and it doesn’t taste like anything,” maybe he’s never had a burger made in Mexico.

In his 2012 book Taco USA, Mexican-food historian and author Gustavo Arellano explains that “the Mexican hamburger is the dish that best personifies the Mexican-American experience, a monument to mestizaje (blend or mix).”  That cultural-culinary blending makes infinite sense considering the quintessential American burger is virtually the same as a Mexican torta, a sandwich stuffed with sundry meats, condiments and cheeses.  Whatever can be put on a burger can be put into a torta.  In Albuquerque, that attitude may best be exemplified by Burger Bro’s, a burger-slash-Mexican food restaurant that launched in November, 2021.

Housed in the complex whose previous occupants included Jennifer James 101, The Grill and most recently Duke City Tacos, Burger Bro’s is owned and operated by the Chavez family.  Originally from Guadalajara, the Chavez family created the perfect motto for their eatery: “Best burgers in USA with the Mexican touch.”  It’s a little (or a lot) ambitious, but don’t discount that “Mexican touch.” The restaurant’s website explains “the best burgers offer a combination of tastes and textures-sweet, sour, salty with a bit of crunch the patty is made from scratch, never frozen and freshly cooked.” My friend Bill Resnik, my Kim and I found out for ourselves it’s not solely the burgers that are imbued with genius.  The menu includes a spate of other items: tortas, tacos, burritos, nachos, quesadillas and hot dogs.  By the way, creative touches on Mexican hot dogs put to shame virtually all hot dogs across the fruited plain.

Four our inaugural visit, both Bill and I enjoyed (an understatement) the NM Burger (also known as the “beautiful mess”).  Despite the name, this burger doesn’t exactly resemble the Land of Enchantment’s sacrosanct green chile cheeseburger.  Instead, this behemoth between buns is topped with ham, avocado, cheese, bacon, classic franks, green chile, lettuce, mustard, ketchup and mayo.  That’s ten toppings–take that Bobby Flay!  You need a thick, well-seasoned beef patty that won’t get lost among all those toppings and that’s what Burger Bro’s delivers.  It’s immediately obvious that the NM Burger’s beef patty is hand-formed, probably a combination of ground beef with breadcrumbs and egg.  This keeps the burgers juicy.  The burger is accompanied by green (jalapeño, guacamole) and red salsas, both of which were fantastic (the green chile was very much on the mild side).  All ingredients on this burger work well together and because the beef is so thick, juicy and flavorful, you’ll never lose sight that what you’re enjoying is one tremendous burger.

For years, I’ve been preaching the glory of tortas to my Kim who prefers tacos.  Maybe I’m one of those islands crying out in the wilderness (or whatever that tired metaphor actually says) because (despite my best efforts) tortas still aren’t catching on in the metropolitan area.  My Kim wasn’t sold on my incessant preaching but she was on the description on the menu of the Torta Cubana (avocado, ham, mozzarella, carne asada, al pastor, classic franks, lettuce and mayo).  Yep, this sounds nothing like the Cubano with which Ricky Ricardo grew up.  It’s a uniquely Mexican take on a sandwich that’s become ubiquitous across the fruited plain.  It’s a wonder the soft pillowy bread didn’t fall apart under the moistness and weight of so many ingredients (and in fact much of the carne asada spilled out).  It’s a wonder I didn’t steal more bites.  It’s an excellent torta!

Burger Bro’s may not serve the best burgers in the USA, but the Mexican flair with which those burgers are created may change the way you approach burgers.