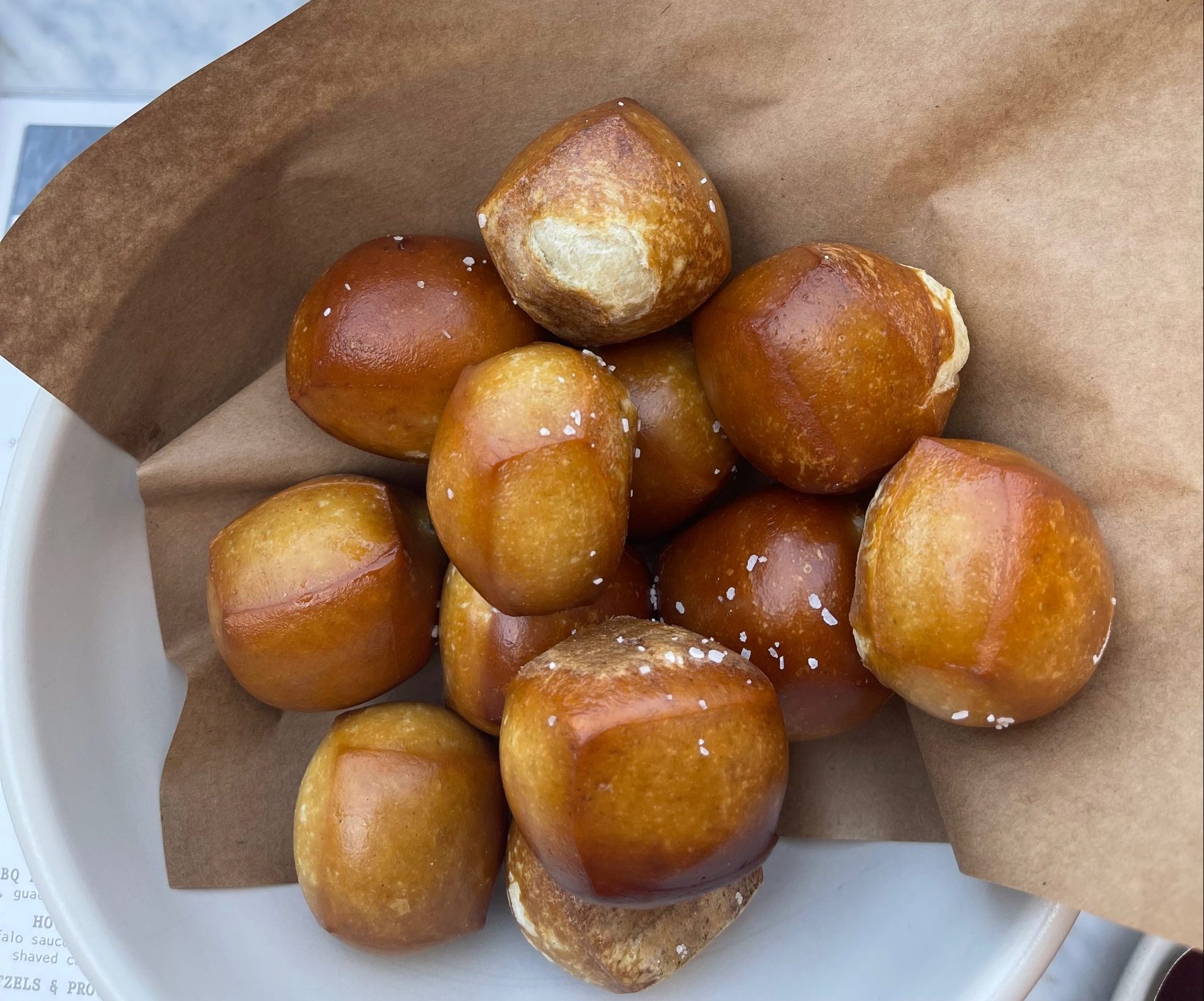 With a name like Culinary Dropout, you might expect an edgy and provocative venue, something hip and trendy where all the beautiful blonde  women of Scottsdale come to mix with bad boys.  That expectation might be reenforced by Old Town Scottsdale website which describes Culinary Dropout:  “From the chefs on the line with silver-studded ears and Mohawk hairdo, to the inked-up, decked-out bar staff mixologists shaking and stirring some of the most creative cocktails, we’re all dropouts here.”  Instead, we found a rather innocuous vibe, akin to maybe Chili’s on a slightly rowdy day.   Most of the diners were coupled, some ferrying toddlers carrying the gene code that will propagate beautiful blondes.  Others strode in with pampered pooches in strollers that cost more than our car.  Live music was smooth and mellow, the antithesis of raucous rock we had expected. Heck, many people who might use that mild oath were among the crowd.

Located in the pricey real estate section of Scottsdale’s Old Town (Waterfront), Culinary Dropout may defy any impression you may have based on its name alone.  You might find, as we did, it’s family friendly, grandma approved.  Now that I’ve ruined its reputation, let me tell you what we really thought of Culinary Dropout.  First, we recognize the name was probably some Madison Avenue think tank’s idea of a catchy name that will bring in a demographic which likes to spend.  Second, we loved the menu, regretting only that we weren’t able to try even more items (that’s what future visits are for).  Third–and most important for our debonair dachshund The Dude–we loved the dog-friendly (understatement) patio.  Because of–close proximity seating, we met some very interesting and nice people, none of whom sported a Mohawk hairdo (not that there’s anything wrong with that).  Finally, from our view on the patio, we enjoyed unobstructed sightings of very expensive and magnificent cars as they passed by.

Culinary Dropout is under the umbrella of the Fox Restaurant Concepts, an Arizona-based creative culinary community with more than fifty restaurant locations nationwide (and counting) under twelve names.  Drive around the Phoenix metropolitan area and you’re bound to run into one.  Make it a point to stop…and probably to make reservations in advance.  We found one open slot for Sunday brunch and jumped on it.  The brunch menu offers enough food choices for everyone, but if you study the main menu you’re likely to espy the one thing that’s not on the brunch menu that you’d absolutely love to have.

Menu options are vast with portions that will surprise you.  While a boon for trenchermen, that may be a detriment to the restaurant.  We intended to order an appetizer or two, a couple of entrees and a dessert to split.  We never made it to the entrees but left so sated and happy, we didn’t miss them.  Besides, as frequently pointed out, that’s what additional visits are for…and there will be future visits.  For one thing, we’ve got to return for lunch or dinner when we can order that one thing we wanted that’s not on the brunch menu.  For me, that would be the Spicy Korean Skirt Steak (forbidden rice, zucchini, mushroom, ginger chili sauce).

While the brunch menu offers a wealth of options, the main menu has an enviable array of delicious items.  First on the menu is a section titled “Soup and Share,” the highlight of which may be “Yesterday’s Soup” because “it’s better the next day.”  The “Meat and Cheese” section of the menu lists individual items from which you can create your own charcuterie board.  Then there’s the “Snacks” section with such delights as marcona almonds and gochujang Brussels sprouts.  Salads, to which you can add salmon, chicken or steak for a pittance more, are an attractive option as are sandwiches (including a turkey pastrami that’s earned high praise on social media.  Entrees include classic American comfort food favorites such as meatloaf and fried chicken.  There are only two desserts on the menu, but both could tempt Job.

It’s not a proverbial “old wife’s tale” that soup tastes better the next day.  There’s actually been scientific studies that show most soups actually do improve with age.  The Kitchn explains “Letting a finished pot of soup hang out overnight means that harsh flavors soften, the ingredients have a chance to absorb the tasty broth, and everything transforms from very distinct flavors into one harmonious soup.”  It’s a theory we test at home all the time by making portions we can’t possibly finish in one meal.  The notion that soup improves with time invited us to try Culinary Dropout’s yesterday’s soup.

Yesterday’s soup turned out to be a tortilla chicken soup brimming with flavor and chock-full of fresh, flavorful ingredients.  The slivers of tortilla were so crisp that they had to have been added just before serving.  Yesterday’s tortillas would have been absorbed completely into the soup.  Almost every spoonful of the soup included a piece of chicken–not a smithereen or crumb, mind you, but hunks of it.  The tomato-based broth was rich and hearty, an exemplar of soup being a comforting elixir.  Alas, our server destroyed the illusion a bit by confessing that yesterday’s soup may have been made up that morning.

One commonality among most of the guests seated on the patio was an order of soft pretzels and Provolone fondue.  These are not the ropes of dough fashioned into the shape of a loose knot that we think of when contemplating pretzels.  Instead, these are more puffy bread roll-like than similar to a cracker with all the qualities of great bread.  A pliable exterior gives way to a soft interior.  Sea salt is sprinkled lightly on the glossy surface.  As wonderful as the soft pretzels are on their own, the Provolone fondue puts them in rarefied air–gourmet pretzels so good you’ll forever change your conception of pretzels.

After thoroughly enjoying our pretzels and yesterday’s soup (that may have come from today), we found ourselves too full to even share an entire entree.  Rather than make ourselves miserable, we selected one item–Prosciutto di San Daniele–from the “Meat and Cheese” section of the menu and one item–Prosciutto Deviled Eggs–from the “Snacks” section.  When deviled eggs were practically de rigueur on restaurant menus a few years ago, we rarely ordered them.  Seeing them on the Culinary Dropout menu must have rekindled any affection we may have had for them.  If all deviled eggs are as good as these, deviled eggs may be in for a comeback.  The balance of devil (tartness, spice) and sulfuric qualities of the egg was a perfect marriage.  By the way, perhaps the best description I’ve seen for  the flavor of a hard-boiled egg is “mild fart.”  Because you can never have enough prosciutto, we had one of our favorite varieties.  Predictably, it was magnificent.

Both my Kim and I are rather anachronistic when it comes to desserts.  She loves cinnamon rolls while bread pudding is one of my passions.  In Culinary Dropout’s monkey bread, bread pudding meets cinnamon roll meets apple pie and it’s all topped with vanilla bean ice cream.  Served piping hot on a small cast iron plate, the monkey bread’s aromas wafted gently into the air to the curiosity and delight of our neighbors.  While I normally eschew overly sweet desserts, this one was special.  Bobbye, my department’s administrative assistant used to bake monkey bread for me in Mississippi.  Seeing monkey bread on the menu dredged up wonderful memories of my dear friend.

In 1966, American psychologist Timothy Leary who was renowned for his strong advocacy of psychedelic drugs, popularized the counterculture era phrase “Turn on, tune in, drop out.”  He didn’t have Culinary Dropout in mind when coining that phrase, but with its combination of live music and terrific food, you can do all three things he advocated.