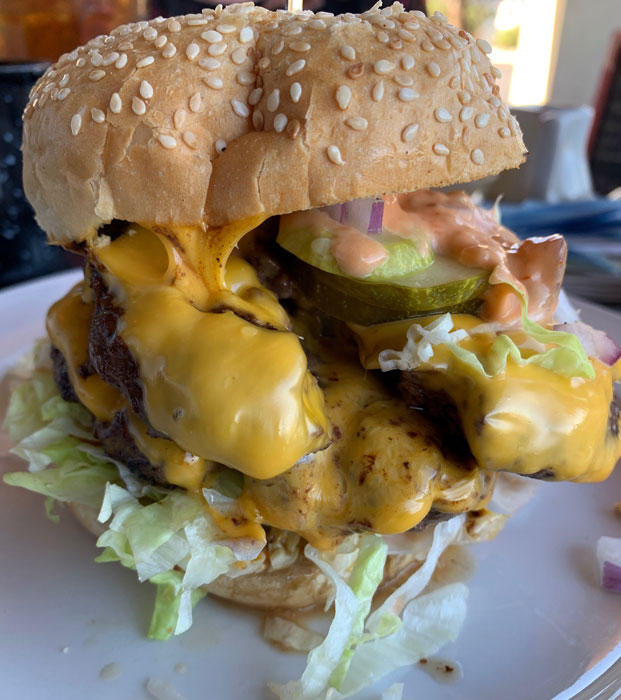 California may not have invented the hamburger, but a strong case could be made that no state has and continues to evolve what is arguably America’s most sacrosanct food.  With more than 6,000 burger restaurants, California has more eateries dedicated to the sacrosanct burger than any other state.  That’s only fitting considering the Golden State also gave us McDonald’s, Jack In The Box, In-N-Out and the “Impossible Burger,” a burger made with a plant-based meat substitute.  The first half of the 20th century introduced the designation “California Burger” in recognition of burgers topped with lettuce, onion and tomato, the fresh produce grown year-round in the Golden State.

In 1924, one of the most significant and lasting innovations to the burger occurred in Pasadena when a 16-year-old invented the cheeseburger.  Nearly a hundred years later, machines began cranking out the world’s first robot-made hamburger in San Francisco.  In 2009, a Los Angeles restaurateur introduced the Umami Burger which incorporates popular Japanese ingredients to a line of savory burgers.  Asian fusion burgers have since exploded across the fruited plain.  In 2014, the Santa Barbara born Habit Burger Grill became the first better-burger chain to file for an Initial Public Offering (IPO) and saw its stock price skyrocket 100-percent within the first day of trading.

In 2017, Guy Fieri, host of the Food Network’s top-rated show “Diners, Drive-Ins and Dives”  visited Grill-A-Burger in Palm Desert, California.  One year later so did your humble blogger.  Okay, so this last event probably wouldn’t qualify under anyone’s list of significant events in the history of the burger, but it meant a lot to me.  Not so much because Guy Fieri had been there, but because Grill-A-Burger was named one of the top ten burgers across the fruited plain by TripAdvisor readers…and because I was able to enjoy two all-beef patties, special sauce, lettuce, cheese, pickles and onions on a sesame seed bun without having to go to McDonald’s (but more on that later).

Fittingly Grill-A-Burger’s “mascot” is a cartoonish gorilla holding a burger nearly as big as his head.  There’s nothing cartoonish about the size of the burger.  Just ask Guy Fieri who had a hard time getting the burger into his well-exercised mouth.  Fieri enjoyed the most incendiary burger on the menu, the aptly named Devil’s Revenge, a behemoth burger made with all the heat of fried Serrano chilies, caramelized chipotle onions, pepper jack cheese, and crisp hardwood smoked bacon, slathered with hot and spicy Spontaneous Combustion Habanero Pepper Relish, Sriracha mayo, and chipotle ketchup on a jalapeno-cheese bun.

The menu bespeaks of the restaurant’s passion for burgers and of providing “high-quality fresh food, excellent service and a few laughs each and every day.”  Some of those laughs and a little double-entendre can be found on the menu, too.  The menu, for example, speaks of changing the “zero trans fat oil every days” for the restaurant’s “a-peeling spuds and stuff.”  It boasts “you can’t beat our meat” and “we have nice buns, too.”  The “I Dream of Weenie” section of the menu listing fifteen different hot dog options asks “what’s your doggy style.”

California is the largest producer of avocados grown in the United States.  Grill-A-Burger serves avocados in a unique and delicious form we hadn’t previously seen–fittingly as an alternative to French or sweet potato fries.  The California Avocado Fries, described on the menu as “Everything you AVO wanted!  Wedges of avocados beer battered, Panko breaded, lightly crisped and seasoned with sea salt.”  This is another California trend that needs to catch on.  Avocado fries are absolutely delicious, even moreso when enlivened with one of the two accompanying dipping sauces, a housemade lime-cilantro and a chipotle-Ranch sauce.  Puncture the Panko breading and you’re rewarded with wisps of steam heralding buttery, hot avocados resembling fries.  Avocado lovers will love this wonderful alternative to guacamole.

For men of my generation, a Big Mac was a rite of passage, a graduation from Happy Meal cheeseburgers to a real adult burger.  It was an event akin to transitioning from training wheels to a ten speed bike.  You can imagine my surprise upon reading a 2016 Wall Street Journal report that only one in five adults between the ages of 18 and 34 has ever even tasted McDonald’s signature burger. That’s right!   Eighty percent of all millennials have never experienced a Big Mac! Even more surprising, many of my generation–those of us who grew up on Big Macs– haven’t had one in decades (and I had thought it was only me).

Thank goodness we discovered Grill-A-Burger.  Among other things, it saved me from someday having to visit McDonald’s to relive my Big Mac experiences.  Grill-A-Burger’s answer to the Big Mac is the “Big Mock (double-decker with double patties, double slices of American cheese, chopped lettuce, chopped onions, pickles and the restaurant’s own “special sauce” on a sesame seed bun).  This is essentially an optimized Big Mac, a Big Mac being all it can be.  True to its name, it makes a mockery of the Big Mac, especially the beef which really did come from cows. It’s one of the very best burgers to cross my lips in five years.

In another one of those mystifying Mars and Venus contradictions even Stephen Hawking would be unable to understand, my Kim ordered the Pancho Villa (fire-roasted green chile, avocado, pepper jack cheese, onion, tomato, Romaine lettuce and chipotle mayo).  Much to my chagrin, she never orders a green chile cheeseburger in New Mexico.  So why would she order one in California?  “Because I was missing green chile,” she explained.  Okay, she got me.  The Pancho Villa is a terrific burger even though the green chile (a single strip laid atop the beef) is rather on the anemic side with not much more bite than a bell pepper (maybe it came from New York City).  Despite the lack of piquancy, it’s such a flavorful burger we couldn’t help but appreciate it for what it was.

Don’t be surprised if someday you read about Grill-A-Burger’s inventing a unique gourmet burger that establishes a new nationwide trend.  It is, after all, a California born-and-bred eatery and no state innovates burgers like California does.