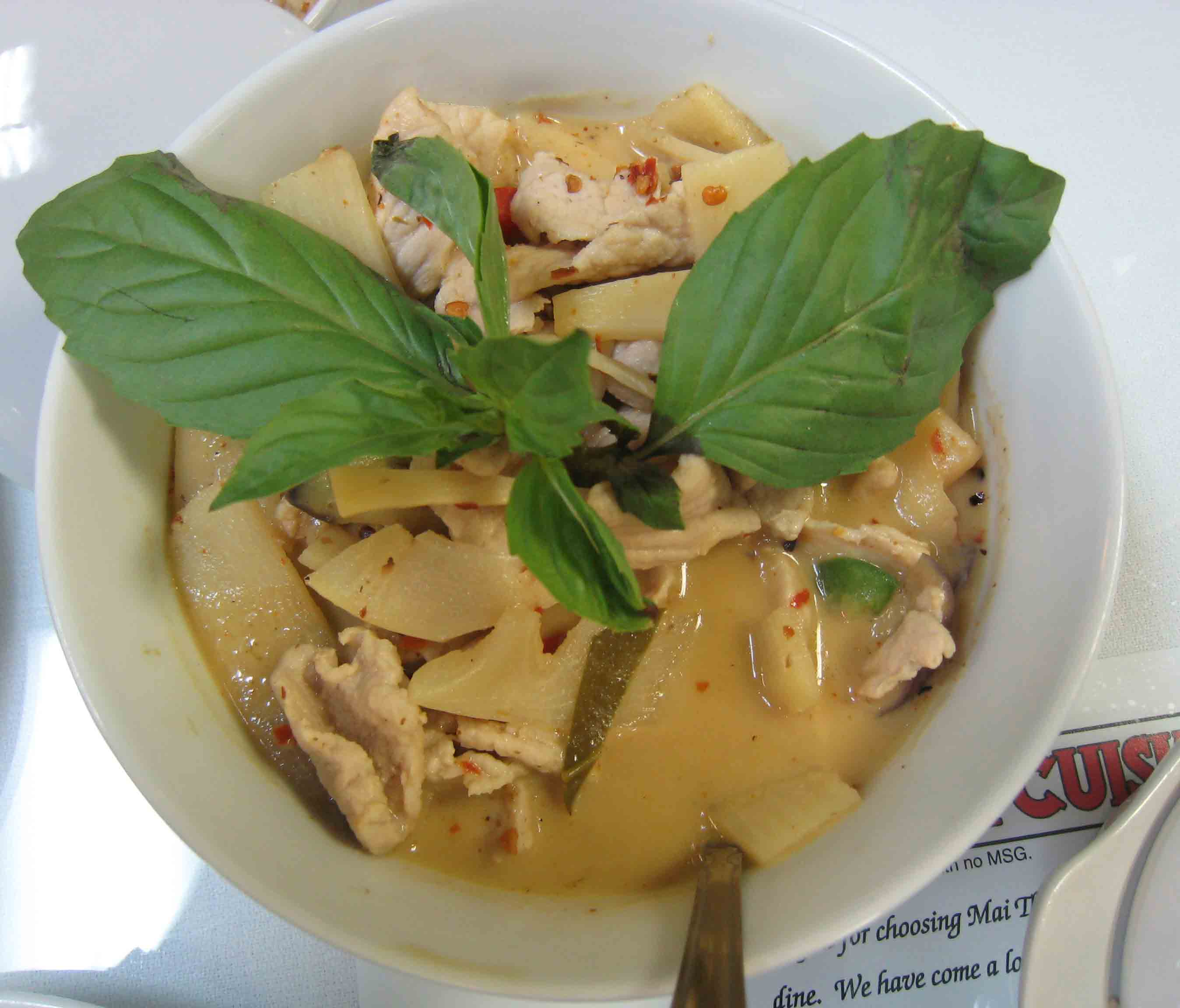 When my buddy Bill Resnik invited me to try a new restaurant called Mai Thai, I immediately wondered if Albuquerque was experiencing a misguided retro renaissance to days gone by when kitschy Polynesian themed night clubs and restaurants were in vogue.

For those of you too young to remember, in the 1960s, 70s and even early 80s, Americans held a huge fascination for the South Seas, an interest propelled by veterans returning from the Pacific theater after the second war to end all wars.  Presiding over the “Tiki” movement was an entrepreneur named Victor Bergeron who founded a popular Polynesian themed restaurant chain named Trader Vic’s.  His restaurants provided temporary departures into escapism replete with waterfalls, torches, carved figures and bamboo huts, all designed to evoke an island ambience.

Bergeron is also renown for the invention of a vibrant and refreshing rum cocktail called the Mai Tai.  Introducing the Mai Tai to the Hawaiian Islands inspired the slogan for his entire business, “Tahitian for the very best Mai Tai.”

Alas, the restaurant Bill invited me to has nothing to do with a faux Polynesian adult beverage and doesn’t even have a liquor license.  It’s also not named “Mai Tai,” but “Mai Thai” as in “my Thai” and maybe as in soon to be “my favorite Thai restaurant” for a lot of Duke City diners if my inaugural visit is any indication.

Mai Thai is located on Eubank north of Lomas and south of Constitution in a site that previously housed several other Thai restaurants.  Thai Dining, Queen of Sushi and Pataya Thai and Rabieng Thong all probably believe the location to be cursed because all were short-lived in that building.  If years of restaurant experience from the restaurant’s owners mean anything, Mai Thai should succeed where the others did not.

Mai Thai is owned by Thanakith “Kit” Chanthvong and his effervescent better half Sam.  Kit handles the kitchen as he has at several of Albuquerque’s best Thai restaurants while Sam is the consummate hostess with a perpetual smile, a role she previously held for five years at Thai Cuisine on Albuquerque’s West side.  They opened Mai Thai in August, 2008.

Both Kit and Sam were born in Laos but their Thai lineage run deep.  So does their menu.  It’s well organized, segmented into appetizers, soups, salads, noodle dishes, stir-fry, curry, seafood, rice, side dishes, dessert and beverages.  It’s a veritable compendium of all my favorite Thai foods.  In 2009 they will eliminate their all-you-can-eat buffet, citing wastage and cost as the reason, but with all the menu has to offer, serious Thai aficionados won’t mind.

If you order your entree “hot” you might want your appetizers delivered in between bites as fire-extinguishing palate cleansers.  That was my thought when consuming incendiary green curry.  The appetizer which might have done the trick is the fresh spring rolls, two to an order.  Translucent rice paper envelops shrimp, fresh cucumber, carrots, cilantro, daikon and thick rice noodles.  The spring rolls are accompanied by a peanut dipping sauce (fish sauce, chili sauce, lime juice, shredded carrots and other ingredients).  Like many Thai dishes, it offers several taste sensations (sweet, savory, piquant, tart) to appeal to different taste buds.

Fiery hot Thai food isn’t subtle; it doesn’t sneak up on you.  It’s also not for everybody (and Mai Thai will prepare it to your exacting specifications of piquancy), but if your tongue is laced with asbestos, it’s the only way you’ll have it.  One of the wonderful aspects of Thai cuisine is that its incendiary qualities aren’t your taste buds singular focus.  No matter how fiery an entree might be, your taste buds can still discern other qualities–the sweetness of coconut milk, the tanginess of citrus, the savoriness of fresh, crisp vegetables, and so forth.

One of the most inspired entrees is laab gai, ground chicken mixed with green onions, dried red peppers, ground roasted rice and freshly squeezed lime juice with flourishes of cilantro on top.  At some restaurants laab gai looks and has a texture similar to clumpy and crunchy granola, but not so at Mai Thai where this popular salad has an exciting flavor and texture.  The rice is first baked then ground, giving it a nice crunch.  The ground chicken comes from all white meat seasoned to perfection.  The melding of tart lime juice and the fragrant, fresh flavor of cilantro coupled with the piquant red peppers provides a taste triumvirate you’ll enjoy immensely.  This is some of the best laab gai in town.

Also quite good is the Kang Kiew Wan, green curry mixed in coconut milk with bamboo, eggplant, bell peppers and your choice of chicken, pork, beef, shrimp or vegetarian.  It is one of six curries on the menu and one for whom the standard bearer for me has always been the green curry at Thai Cuisine.  The green curry at Mai Thai might be better.  It is thinner than some green curry I’ve had, but it is intensely flavored and not solely in terms of piquancy or sweetness (from the coconut milk).  The bamboo shoots and eggplant are cooked to perfection.  In fact, all ingredients meld together wonderfully.

Mai Thai joins other terrific Asian restaurants such as Ming Dynasty, Taj Palace and Yummi House as popular Eubank dining destinations and not just with the Sandia Labs crowds.  Duke City residents have another reason to head east.