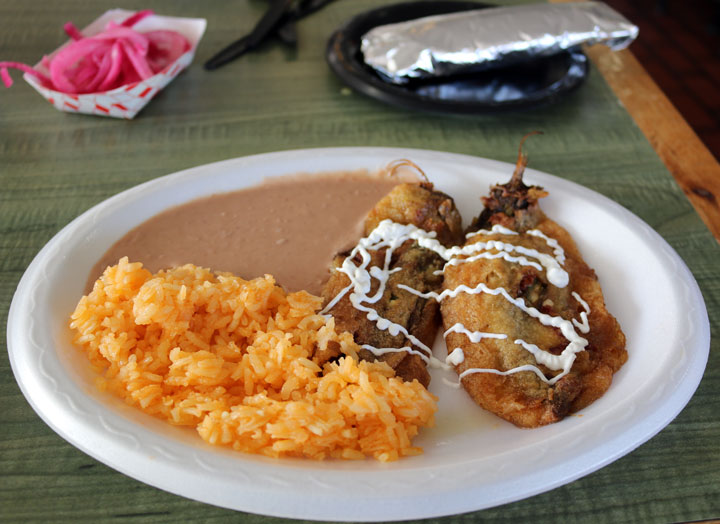 As we perused the colorful menu hanging on the wall at El Taco Tote, my friends Captain Tuttle, Bob of the Village Of Los Ranchos and I pondered the veracity of images depicting gargantuan tacos brimming with glistening meat and sundry toppings. Could these super-sized behemoths possibly be as large as pictured? Perhaps, as in “objects in the mirror may appear closer than they are,” these tacos only appear large in photos. Captain Tuttle, a semi-regular at Taco Tote, confirmed that the truth is somewhere between the perfectly posed tacos portrayed on the menu and those actually served. He recalled from previous visits, being served tacos with as much as four ounces of meat. That’s as much as McDonald’s vaunted Quarter-Pounder.

Considering most taquerias nowadays tend to prefer (and proffer) small tacos, we wondered if Taco Tote’s largesse was an accommodation to denizens of the fruited plain who crave and expect Brobdingnagian portions. We’re not the only ones who’ve pondered this Jack Handy level deep thought. In an April, 2010 edition of “Ask A Mexican,” a reader asked columnist Gustavo Arellano “why do those tiny little Mexican tacos exist? Does anyone prefer getting 3 tiny tacos instead of 1 good sized one?” Arellano clarified “It’s in the United States where the taco has been super-sized. In Mexico, and in Mexican communities in los Estados Unidos , tacos continue to be best appreciated small–four bites maximum. A taco is meant to be a snack, a bit, not a full meal. If we wanted something bigger, we’d order a plate or a bowl–or, better yet, order a plate/bowl make our own impromptu tacos.” So there!

Alas, smaller tacos don’t necessarily translate to smaller prices. In fact, Arellano has observed that “restaurants always overprice tacos, even when they’re substantially bigger than the small tortillas.” He laments further that one of his favorite taquerias commits the “cardinal sin of charging more than a dollar for a taco. I don’t care how great or big a taco is–a taco is not worth more than a dollar ever”. Much has changed–including the hyper-inflated cost of food–since 2010 when he made that declaration. The price of Taco Tote’s offerings might just send him into sticker shock. My initial assessment was that the price of tacos is nearing that of burgers, then I remembered just how expensive burgers have become.

With signage boasting “We don’t build a better taco…You do!,” Taco Tote’ operating model differs from that of many of its competitors where tacos are constructed for you. You truly can have it your way at Taco Tote! Your way starts with the filling of your choice: sirloin, arrachera (skirt steak), grilled chicken, bistek (inside round beef), barbacoa (cheek meat), fish, adobada pork (pork marinated in traditional Mexican dried chilies and spices), adobada chicken, shrimp, al pastor, carne asada, tripitas (small intestines) and brocheta (sirloin sautéed with green chilies and onions. There’s only one vegetarian offering, a mushroom and veggie medley sautéed with soy sauce and “special spices.”

Place your order then saunter over to the condiment bar which is where your taco becomes a “tote” (Mexican slang for large) as you cram it with onions, cucumber, cilantro, grilled hot peppers and more. Six salsas, all of which pack a potent punch, are also available, but be forewarned, a couple of them might require a fire extinguisher. The pequin chile talamada isn’t quite hot enough to remove the enamel from your teeth, but it might burn your tongue a bit. Even the guacamole salsa has a bit of a bite. You’ll be impressed by the fresh quality of the condiment bar where everything appeared to be homemade.

During our inaugural venture in 2006, my Kim and I fell in love with the pickled red onions which went especially well with the fish tacos. El Taco Tote’s fish tacos are akin to those you might find in the landlocked regions of Mexico where the fish is fried then nestled into warm corn tortillas. It’s then up to you to dress those tacos with the condiments of your choice. With fish tacos, you have to exercise some caution because unlike some meats, not everything goes well with fish. Bob enjoyed his inaugural foray into the fish taco arena undressed. No, not him. His fish taco. That’s the beauty of Taco Tote. You’re free to create…or not to.

21 November 2017: Despite the promise of titanic tacos, Captain Tuttle and I fell prey to Taco Tote’s clever of point-of-sale-marketing ploy. When we got to the cash register, we espied a poster touting Taco Tote’s latest offering, Hatch chiles rellenos with refried beans and Spanish rice. We just had to see for ourselves if these rellenos were as appetizing as the poster was appealing. We should have stuck to tacos. The rellenos were more than a bit on the mushy side, a result of having been fried in grease that just wasn’t hot enough. Your intrepid blogger could barely finish one of the two rellenos on the plate. Thankfully the tortillas and beans were quite good.

El Taco Tote’s corn and flour tortillas are made by hand, ostensibly the way they’ve been made in Mexico for hundreds of years. You can even watch these magical orbs being crafted thanks to the restaurant’s open kitchen design. Refried beans have a slight aftertaste of lard which also holds true to Mexican tradition. The Spanish rice is a bit on the dry side, but as regular readers know, Spanish rice rarely receives praise on this blog. Three aguas frescas–horchata, jamaica and melon) are available to wash down your victuals.

El Taco Tote describes itself as an “all fresh” restaurant, everything–from tortillas to its distinctive salsa bar–is made fresh every day, with no preservatives and with the best quality in produce, meats and ingredients. In that salsa bar you’ll find everything you need to create your tacos your way.