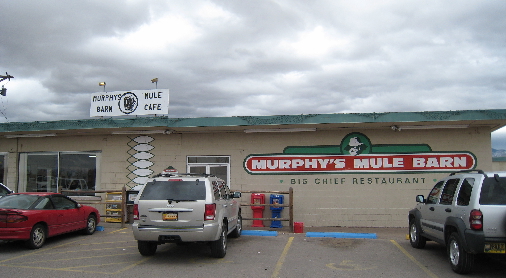 A mule is an animal with long funny ears
he kicks up at anything he hears
His back is brawny but his brain is weak
he’s just plain stupid with a stubborn streak
and by the way if you hate to go to school
You may grow up to be a mule.
– Bing Crosby

Murphy’s law, a popular adage in Western culture is commonly formulated as “if anything can go wrong, it will.”  Murphy’s Mule Barn, a popular North Valley restaurant, hasn’t posited any law that I know of, but if it did, the law might read something like “friendly folks, great food, huge portions, small check.”

Named for Murphy’s Mule Barn in Salina, Kansas, the restaurant celebrates all things mule in a cutesy sort of way with an ambience that includes barn implements such as stirrups, harnesses and other mule driving tools, many of the antique variety.

Pictures of mules and ceramic statues of burros add rustic charm while posters by prominent New Mexico artist B.C. Nowlin give no indication that Nowlin, one of the restaurant’s most famous “local” patrons starts many a day with breakfast at Murphy’s before heading to his studio (and it’s a good bet he gets there full).

BC Nowlin not withstanding, the most famous diner to visit Murphy’s Mule Barn was Kirk Douglas whose 1962 movie Lonely Are The Brave was partially filmed at the restaurant.

Murphy’s was once a truck stop called Big Chief and still has somewhat of a truck stop feel to it.  Many of its patrons dine in their most comfortable ranch work clothes complete with well-worn and dusty baseball caps.

In days past, some of Murphy’s patrons filled up the smoking section until New Mexico passed a law prohibiting smoking in restaurants.  Breakfast, lunch and dinner have improved vastly since then.

At Murphy’s, the typical portion size would feed a developing third world nation.  Fortunately the level of quality is nearly equal to the portion size.

The near foot-long, three-egg breakfast burrito, for example, is overfilled with crispy hash browns and your choice of ham, bacon or sausage (or all three if you’d like) then topped with a green or red chile sauce.

The green chile sauce is wonderful.  It has very little bite, but has plenty of the requisite roasted green chile taste aficionados love.  The red chile is also low on the piquancy scale, but also has a nice flavor.  Together the red and green chile combine to make this breakfast burrito among the tastiest breakfast burritos in town.

Murphy’s homemade cinnamon rolls are immense six inch (irregular) squares, inch-deep masses of baked dough, raisins, sugar, cinnamon and lots of butter.  They’re easily big enough for a small family to share, but could use a bit more cinnamon (I say that about all cinnamon rolls).

The bacon is the type only restaurants seem to be able to find and serve.  Each strip is long, thick and crispy–the type of bacon you don’t want to share with your dining companions.

Show me an old-fashioned Americana diner and I’ll guarantee excellent pancakes.  Murphy’s pancakes are easily nine inches in circumference and are among the very best in the metropolitan area.  Slather on some butter and syrup and you’re in carbohydrate heaven.

My chain worshipping friends might dismiss Murphy’s as a dining option without ever trying it.  That’s entirely their loss and fortunately an opinion not shared by the throngs who frequent this North Valley institution.

My own lasting impression is that Murphy’s is a throw-back to an era in which waitresses were friendly, breakfast was served anytime and menus included ads for neighboring businesses.”  Murphy’s is a delicious bit of Americana in Albuquerque’s North Valley.