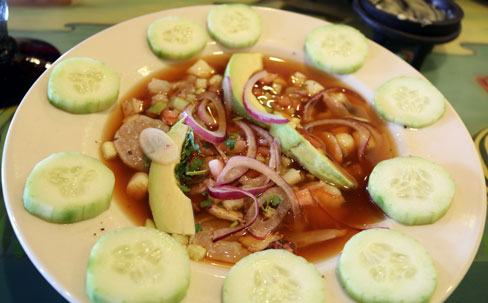 There’s deliciousness and there’s delicious irony on the menu at Mariscos La Playa. The deliciousness is more readily apparent. It’s part and parcel of virtually every item on the menu. You have to understand a little Spanish to grasp the delicious irony which is outwardly manifested in the form of a soup called “Caldo Vuelve a la Vida,” literally ” Come-back-to-life-soup.” The soup is a metaphor for the restaurant itself, the irony being that the restaurant itself has come back to life in Albuquerque after a hiatus of almost two years.

Mariscos La Playa operated in the Duke City from November, 2006 through mid-2013. Located on Central Avenue just west of Atrisco, the colorful Mexican seafood restaurant received significant critical acclaim from every online and print medium in the city. Moreover, it earned popular acclaim among Mexican seafood aficionados. Large crowds typified lunch and dinner at Mariscos La Playa, the third instantiation of a Mexican seafood dynasty founded and operated by Luis Ortega and his family who also own two locations in Santa Fe and one in Española.

From a demographic standpoint, the original location was probably more ideally situated for the Duke City’s Mexican population. The new location–on San Mateo just north of McLeod–is in what long-time friend of this Blog (and charter FOG member) John L calls “Mortgage Heights.” It’s situated in a “challenged” (some might say “cursed”) location previously occupied by such tenants as the Prickly Pear Bar & Grill and before that Sabroso’s, both New Mexican restaurants.

Visit the restaurant during a busy traffic day and you’ll quickly discern why the location is so challenged. If you’re driving south on San Mateo, you’ll find that there is no direct right turn to the restaurant and traffic can be so dense and busy that you may have to wait for a while to turn in. Then there’s the phenomenon of the far right lane headed north. For some reason, this lane is as tightly packed as a procession of ants headed toward a picnic. But I digress…

As with its predecessor on Central and its siblings in Santa Fe an Española, Mariscos La Playa is one of the most colorful restaurants in Albuquerque–not on the outside which is pretty homogeneous, but in the two capacious dining areas which are arrayed in a vivid pageantry of color. From the vibrant ochre and sunshiny yellow walls to the painted seats, there’s something to catch your eye at every turn. The sound system is tuned to a Pandora genre featuring Mariachi music, most of which is festive and all of which is thoroughly enjoyable.

You’ll find the menu nearly as colorful as the restaurant. It’s a veritable compendium of mariscos with a few landlubber entrees thrown in for good measure. Menu items are listed first in Spanish with English translations directly below providing clear and detailed descriptions, including ingredients. As you peruse the menu, you’ll want to indulge in agua de horchata served in a goblet larger than some aquariums. The horchata is among the best in town.

As with its predecessor, the service at Mariscos La Playa is impeccable with one of the most attentive and polite wait staffs around–a hallmark of the Ortega family restaurants. Better still, the wait staff makes sure there’s no surcease to the salsa and chips or the incomparable creamy avocado-based dip. The salsa, a pico de gallo, is at least as good as the very best pico served at other Mexican restaurants in New Mexico. The third “salsa” is a thin bean dip served warm. It’s somewhat watery–like the brownish broth at the bottom of a bean pot after the beans have been extricated–with small bits of mashed pinto bean. A few more beans and slightly less broth would make it even more delicious and certainly neater for your attire.

The avocado dip is indeed something special. It melds sour cream, ripe avocados, tomatoes, onions and jalapenos into a creamy concoction that you might dream about the evening after consuming it. The version at Albuquerque’s Mariscos La Playa is unfailingly creamy but varies in piquancy depending on the potency and quantity of the jalapenos added. It’s terrific on chips or as an additive to any entree.

The start of a memorable meal might include tostadas de ceviche crafted from crispy (yet formidable enough to support handfuls of seafood) tostadas first layered with mayonnaise then heaped with either shrimp or a seafood combination, cilantro, onion and chopped tomatoes. It’s a colorful and delicious appetizer you can also have as an entree in which it comes as an order of three. During our inaugural visit to Mariscos La Playa’s new location, we found the ceviche de camaron (shrimp) in dire need of desalinization, but the ceviche de pescado (fish) has a just right citrus influence.

If it’s true that men really are genetically predisposed to salivate at the aroma, taste or mention of bacon, male diners should try the Discada Norteña, grilled diced beef with bacon, onions, tomato and white cheese served with corn tortillas, lettuce, tomato and avocado. While all the ingredients go together very well, it’s the bacon that comes across as the prevalent taste–and that’s not at all a bad thing. This entree comes in portions for one or for two and is served in a flat, circular pan with a can of Sterno to keep it warm (at some point, turn off the Sterno or your bounty will cake up at the bottom).

If seafood had been intended to be boring, it would be available only in monotonous chain restaurants purporting to “speak fish” and cater to “the seafood lover in you.” It would mean Americans would be subjected solely to heavily breaded seafood with each item virtually indistinguishable from the other. Fortunately, there are many ways in which to enjoy seafood and Mariscos La Playa prepares them all very well. If you enjoy seafood combinations served warm–and this does not mean fried and breaded–there’s the mariscada caliente, a mixed grill of fish, shrimp, scallops, calamari and octopus.

For an entirely different and remarkably refreshing perspective on seafood, try the mariscada fria, a mix of seafood (shrimp, octopus and scallops) tossed with lime juice, shaved onions and chile de arbol. Much like the amazing molcajete aguachile at El Zarandeado, it’s a dish that combines piquancy and tanginess to enliven very fresh and very well prepared seafood. The seafood items virtually swim in the lime juice just waiting for your fork to extract them. The presentation is interesting with the wide bowl ringed by sliced cucumber satellites.

There are several desserts on the menu, including the pastel tres leches (cake of the three milks). As its name implies, this cake is made with three kinds of milk: evaporated milk, condensed milk and either whole milk or cream. Butter is not an ingredient and as such, this is generally a very light cake with a lot of air bubbles. As you press your fork down on a tres leches cake, it should ooze with milky goodness without being soggy. Alas, we found the tres leches cake at Mariscos La Playa on the desiccated side, not at all living up to its name.