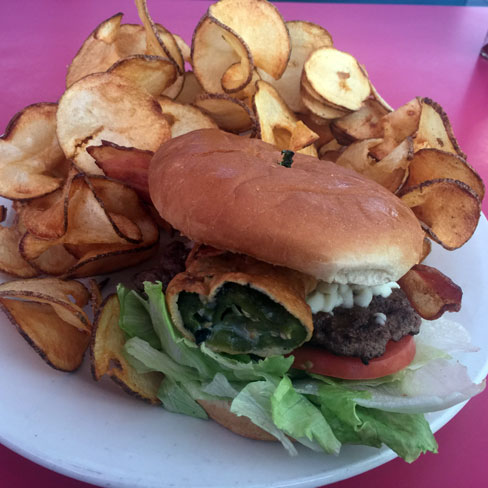 Restaurants come and restaurant’s go. It’s not hard to tell when a bad restaurant is nearing its demise. The telltale signs practically scream at you. Service is indifferent in spite of (or maybe because of) only a handful of guests to look after. The food is uninspired, seemingly just something thrown together haphazardly. A pall of gloom and malaise seems to pervade the ambiance, hastening your meal so you can get out of there quickly. Such was the case when in August, 2015 I first visited the burger and fast food restaurant which formerly occupied a red, white and blue structure just west of Kirtland Air Force Base on Gibson. Needless to say, it wasn’t a restaurant about which I’d write, much less visit a second time.

This is a tale of two restaurants at one location. My experience at the former is described above. It’s an experience validated by several Yelp and Zomato respondents. The latter is the complete antithesis of the former as I experienced it–as different in every way as one restaurant could be from another. The latter, sporting a the not-so-New Mexican name of Leilani’s is a family-owned-and operated gem. In terms of ambiance, it’s isn’t much different from its predecessor. Attitudinally, there’s a world of difference. At Leilani’s, guests are greeted warmly, invited to sit and looked after warmly during the duration of your meal. Moreover, the food is obviously prepared to order and delivered fresh and delicious.

Leilani’s operating model is spelled out in its Web site: “We believe that great tasting food shouldn’t break the bank. That when our customer sits at our table it’s as if they pulled up a chair at their own dining room table. And that our staff feels like your extended family.” These aren’t just words for the Segura family; it’s how they treat all their guests. In my first two visits, the charming Lydia took very good care of me, rendering the same personable attention to every guest and still managing to make everyone seem special.

Based on name alone, you might expect Leilani’s would serve Hawaiian food and that it would be arrayed in luau splendor. Leilani, which translates from Hawaiian to “heavenly flowers” or “royal child” is actually the name of the owner’s daughter. Instead of poi, lau lau and poco moco, the cafe serves Mexican and New Mexican food and is open every day but Sunday for breakfast and lunch. Before launching at its Gibson location in September, 2015, Leilani’s operated for three years as a private restaurant for employees of The Downs racetrack in Albuquerque.

At many restaurants, the practice of serving complimentary salsa is going the way of the Coelophysis (New Mexico’s official state dinosaur). Leilani’s doesn’t just bring you one salsa. You’re treated to two distinctly delicious and incendiary salsas, one green and one red. The salsas aren’t served in thimble-sized dispensers, but in sizable plastic ramekins. You’ll run out of chips before you run out of salsa. Both the red and the green are equally piquant and addictive. The red salsa is a bit thicker with the punch of jalapenos, the invigorating freshness of cilantro, the sharpness of white onions and the juiciness of tomatoes. The chips are crisp and low in salt.

4 November 2015: If you’ve ordered tacos recently, you’ve probably been taken aback at how pricey they’ve become. Though inexpensive to prepare, restaurants have marked them up so much you’d think they were made of rare and treasured ingredients. During my inaugural visit to Leilani’s, chicken tacos were the special of the day and they weren’t priced like gold bullion. Three tacos brimming with marinated, grilled chicken, shredded white and yellow Cheddar, lettuce and tomatoes were served with refried beans and rice. Though inexpensive, this generously plated lunch is a real steal considering the quality and deliciousness of the ingredients. The cubed chicken was impregnated with a savory-smoky marinade that enlivened the chicken.

10 November 2015: In the Land of Enchantment, the green chile cheeseburger has become synonymous with New Mexico’s burger. Seeing a burger called “New Mexico Cheeseburger” on Leilani’s menu, therefor, piqued my interest. Surely it would be a green chile cheeseburger in the fashion we’ve all come to know and love them. Instead, Leilani’s New Mexico Cheeseburger is an intriguing twist on our sacrosanct state burger. It’s constructed from a hand-formed quarter-pound patty, slice of mozzarella, breaded chile relleno, bacon, lettuce and tomato. The chile relleno is the most compelling aspect of this burger, but not necessarily the most delicious. That honor belongs to the hand-formed beef patty which is perfectly seasoned, juicy and perfectly delicious at an 80/20 beef to fat ratio. There’s only one “bummer” to this burger and it’s that the buns fall apart from the sheer volume and moistness of the ingredients. Still in all, it’s a burger so good you won’t mind sharing it with your hands.

10 November 2015: Burgers are available with your choice of French fries or ribbon fries. Savvy diners will opt for the ribbon fries. Not only do you get a mountain of them on your plate, they’re absolutely terrific. By strict definition, however, they’re not fries, but potato chips, some of the best you’ll have. In fact, only the patates at Gyros Mediterranean are on par with these terrific tubers. The ribbon fries are so good they don’t need anything else, but if you want to spice things up a little, ask for Valentina hot sauce, a tangy-piquant way to liven up anything.

As if an excellent meal served by a very pleasant family isn’t enough, Leilani’s Cafe offers a reward card. After nine entrees, the tenth entree is free. Here’s betting a lot of reward cards will be redeemed.