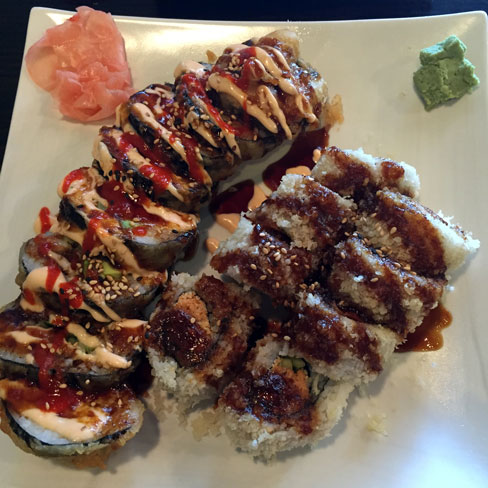 My adovada adoring amigo Ruben likened the irony to an episode of Seinfeld. Two weeks into his experiment with an ostensibly healthier vegan diet, he was craving sushi and needed his sushi-specific pangs of hunger sated. No sooner had we finished a very satisfying sushi soiree at Albuquerque’s only vegan sushi restaurant than our waitress apprised us the restaurant would be closing for good two days later. “Serenity now,” we cried, mimicking Frank Costanza when faced with a stressful situation. It just didn’t seem fair that we would make such a delicious discovery only to have plans for future meals dashed.

Loving Vegan gave it the “old college try,” initially launching in June, 2012 on Coors Blvd before relocating in November, 2013 to a much more heavily trafficked Nob Hill location. In its relatively short life, Loving Vegan garnered a loyal following and a very prestigious honor. Within a year of opening, PETA (People for the Ethical Treatment of Animals) named Loving Vegan the “top restaurant for vegan sushi” in the United States and Canada. The citation from PETA read: “Loving Vegan earned our top prize because it truly proves that any food can be made deliciously and healthfully without animal products. Cheers and congratulations to Loving Vegan — this number-one award is well deserved!”

Despite being a relative newcomer competing against vegan restaurants in such population centers as Los Angeles, New York, San Francisco, Washington, D.C., Ontario (Canada) and Baltimore, to veteran observers of the Duke City dining scene, it came as no surprise that Loving Vegan would be accorded such an honor. After all, it was founded by Kathy Punya, one of Albuquerque’s most active restaurant impresarios. Among Kathy’s other eateries are a number of Sushi King restaurants throughout the Duke City as well as one in Rio Rancho. Kathy Punya knows sushi!

Kathy also knows restaurants. After all vestiges of Loving Vegan have been cleared out, one of her other restaurants, Soul and Vine, a downtown fine-dining gem will be moving in. Parking in Nob Hill is probably only slightly better than in the downtown district, but Nob Hill may be more heavily trafficked in the evening hours than is the downtown area, especially by the dining demographic.

Ruben and I were pleasantly surprised at the diversity and depth of the Loving Vegan menu. Not only did the menu list a tremendous variety of sushi (nigiri, sashimi, rolls, hand rolls and chef’s specials) options, a separate menu showcased Bento boxes, rice dishes, pan-fried noodles, noodle soups, Chinese stir-fried dishes and chef specials. The chef specials included Pad Thai and three curry dishes including a vegan duck curry dish that beckoned me to try it. Loving Vegan’s menu was as ambitious and inviting as any menu in any of Albuquerque’s many Asian restaurants.

As we discovered, diners didn’t need to be of the vegan or vegetarian persuasion to enjoy a meal at Loving Vegan. If we hadn’t known better, in fact, we would have sworn there was little discernible difference between some of the vegan sushi we enjoyed and sushi at traditional “fishy” sushi restaurants throughout the Duke City and that’s not just the horseradish-heavy wasabi talking. Before finding out about the restaurant’s impending closure, it pleased Ruben to no end that despite his new healthful dietetic lifestyle, he’d be able to continue enjoying sushi.

By no stretch of the imagination is miso soup vegan. The basis for this traditional Japanese favorite is dashi, a fish-based (fermented bonito or skipjack tuna fish shavings) broth and a salty fermented soybean paste. A vegan-friendly version can be made fairly easily by substituting vegetable stock for the dashi. Loving Vegan’s rendition has the pungent, salty qualities of traditional miso soup and had it been served hot instead of lukewarm, it would have been even more enjoyable.

We initially wondered if the sheer number of ingredients on each sushi roll was a deliberate attempt at “masking” the flavor of the vegan ingredients, but it dawned on us that most American sushi rolls also tend to constructed from a preponderance of ingredients. The vegan spicy tuna crunch roll was an exception in that the sole listed ingredients were vegan spicy tuna and cucumber inside with tempura flakes and sweet sauce on top. Frankly, we didn’t spend much time trying to discern the nuanced differences between vegan tuna and its “regular” sushi counterpart. That’s more indicative of our genuine appreciation for its deliciousness than any perceived lack of scientific curiosity. This was a very good roll.

We also disposed of the Loving Vegan Roll (green chili tempura, avocado, cucumber, vegan lobster inside; deep fried with spicy mayo, sriracha, and sweet sauce on top) rather quickly. It wasn’t until we had wiped it out that we asked ourselves about the flavor of the vegan lobster. Neither of us discerned, either texturally or flavor-wise, any lobster-like flavor. We did, however, note that the “green chili” wasn’t especially reminiscent of New Mexico’s sacrosanct green chile. Any heat we gleaned from this roll had its genesis in the wasabi and sriracha. Still in all, we enjoyed the Loving Vegan Roll very much.

Framed and captioned photographs on the walls proved very enticing–true food porn, none more alluring than the grilled portobello (SIC) roll (a unagi roll with cucumber, salmon and sweet sauce on top). “Mock” unagi was nearly as good as its eel-based counterpart thanks largely to a generous application of the sweet “eel sauce.” If the rapidity with which we dispensed of this roll is any indication, we enjoyed it thoroughly…and as with our previous vegan sushi conquests, we didn’t spend much time trying to determine its composition though I now surmise roasted eggplant may have been the basis for mock unagi.