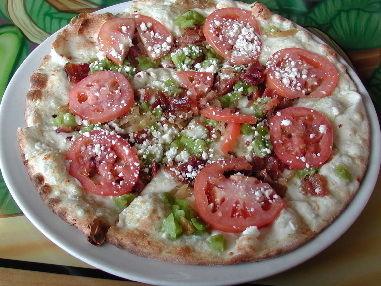 In another review, I discussed the debate concerning pizza by the slice versus pizza by the pie.  That debate is tepid in its intensity compared to the debate between proponents of thin-crust and aficionados of thick crust–and we’re not talking about gourmet pizza (which is typically thin) versus deep dish pizza, not to mention New York style versus Chicago pizza (there’s an almost religious intensity in that debate).

Dissenting voices will argue that thin-crust pizza is paper thin, has a cracker-like consistency, is dry and dense and doesn’t hold up against the weight of toppings.  The anti thin-crust crowd becomes a little thin-skinned themselves when their favorite pizza is called a quiche and is described as droopy, soggy bread.

Debating this contentious issue takes time away from what both sides should be doing and that’s eating the pizza of their choice.  “Live and let eat” is the motto to which subscribe those of us who love their pizzas thin, thick and everything in between.

One of the best known and heavily patronized purveyors of thin-crust pizza in the Duke City is Scarpas, a California inspired restaurant with two city locations.  Scarpas isn’t just renown for its brick-oven “anything goes as a topping” gourmet pizzas.  Many diners visit for gourmet salads and some, like Albuquerque’s most pulchritudinous pugilist Holly Holmes prefer the pasta.

Scarpas is owned by Albuquerque restaurant impresario Jim Schumacher who also owns the Cooperage.  In 1999, he earned a community recognition award from cleanlungs.com for keeping Scarpas 100% smoke-free (this was back in the dark days when smoking was permitted in restaurants).

The first Scarpas was launched in 1995 at 5500 Academy, N.E.  A second, somewhat larger location on Montgomery followed suit four years later.  The facade on the Montgomery location is an architectural dichotomy featuring Anasazi inspired stonework on a modern edifice.

Anasazi style stonework is also prevalent inside the restaurant where modern touches abound—quarried stone tile under your feet and colorful modern art on the walls. The brick oven is actually ensconced behind burnished copper.  Though the seating is sturdy and supportive, the chairbacks aren’t made for long visits.

That’s apparently by design.  Scarpas is known for getting you in and getting you out quickly.  It’s a great restaurant if you’re in a hurry to get somewhere.  It may take longer for you to decide what to have from among copious menu options than for your order to be filled.

Years ago I timed the preparation of a pizza on a 1,200 degree coal-burning oven at New York City’s world famous Grimaldi’s at just under three minutes.  Thin-crust pizzas are in and out of a brick oven in a much shorter time–barely over a minute at Scarpas.

There are some consequences to the shorter baking time.  Although the crust may have a hint of char on a crispy crust and its outside edges may be replete with airy holes, you won’t finish your first slice before the pizza has cooled down (with thick-crust pizzas, you’d probably have burned the roof of your mouth with your first bite).

Scarpas pizzas are fired with a blend of Mozzarella and Fontina cheeses, unless otherwise specified.  California inspired ingredients such as Thai chicken, sun-dried tomatoes, shitake mushrooms and even rosemary potatoes are available on a menu that features nineteen different pizzas.  You can, of course, create your own.

The quartered Four Seasons pizza is made with a garlic cream sauce and is populated with artichoke hearts, pancetta bacon, shitake and domestic mushrooms and smoked salmon.  It’s topped with Kalamata olives and goat cheese.  Though I’ve never been able to discern which season is represented on any particular quarter, this pizza is indicative of the menu’s California creativity.

You don’t, of course, have to be creative.  If you prefer the simplicity of a relatively unadorned pizza, you can have that, too.  The Italian sausage pizza, for example, is comparatively barren with only garlic cream sauce, roasted bell peppers, caramelized onions and fennel-rich sausage.

More sophisticated pastas are available, such as the New Orleans Linguini, Andouille sausage, oak-grilled chicken, tomatoes, red bell peppers, onions and parmesan cheese over linguini.  Not nearly as spicy as the city for which it is named, you might consider adding New Mexico’s own green chile to this dish.  It’s a flavor enhancer that seems to work very well with the other ingredients, particularly the Andouille sausage.

Scarpas torta di meli is one of the most popular dessert items in the City.  This specialty dessert is easily big enough for two to share.  It starts with a warm puff pastry apple tart baked in the wood burning brick oven then it gets good from there.  This pastry is topped with your choice of either Vietnamese cinnamon ice cream or Cappuccino Commotion ice cream (both are deliciously decadent), cinnamon, caramel sauce and whipped cream.  Unfortunately you can’t have both ice creams because portions are measured.  Still, with either ice cream, it’s a delicious dessert you won’t soon forget.

Scarpas is a favorite of business people and families alike.  It’s frequently packed and usually noisy, but is always a restaurant on which you can count for a solid, if unspectacular meal.