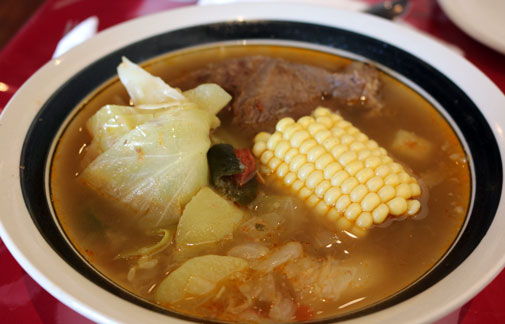 Driving north on Fourth one Sunday afternoon, my sharp-eyed Kim espied a new eatery with the curious name El Papaturro. Our first inclination was that the Pappas Restaurants group had made another incursion into the Land of Enchantment. It seemed to make sense considering the Pappas Restaurant Group, a family-owned and operated restaurant company based out of Houston, is the parent restaurant of Pappadeaux which has had a presence in Albuquerque since 2004. Pappadeux, a seafood restaurant with Cajun leanings, has several sibling eateries across the fruited plain, all sporting “Pappas” on their appellation. Seemingly covering all palates, the Pappas restaurant family includes Pappasito’s Cantina for the Mexican food lover in you, Pappas Seafood House, Pappas Brothers Steakhouse, Pappas Bar-B-Q, Pappas Burger and Pappas Grill and Steakhouse.

Upon finally remembering that the trademark spelling for the Pappas family of restaurants calls for “Pappa” to be spelled with two p’s, we dismissed the notion that this was yet another restaurant in the burgeoning Pappas family. So what the heck, we wondered, is a Papaturro? Most likely, we reasoned, the term was probably Greek and not Spanish. With our combined vocabulary of Spanish and Spanglish words (including dozens of invectives), we would certainly have heard the term Papaturro. It wasn’t until we pulled up and saw the word “Pupusas” scrawled on the window that we knew we’d uncovered another Salvadoran restaurant in the fair city of Albuquerque.

The Duke City was first graced with a Salvadoran restaurant in November, 2005 when the Aguilar family launched the Pupuseria Y Restaurante Salvadoreno in a homey hole-in-the-wall on the corner of Goff and Bridge. Not quite a decade later, the Aguilar family expanded to Santa Fe, where they opened “El Salvadoreno.” It wasn’t Santa Fe’s first Salvadorean culinary rodeo. City Different diners had actually been enjoying Salvadoran cuisine since 2008 when the Tune-Up Café opened, introducing both the capital city and Food Network star Guy Fieri to the pupusa.

To Salvadorans and Hondurans, pupusas are as sacrosanct as hamburgers and hot dogs are across the fruited plain. They’ve also become increasingly popular in other Latin American countries and, thanks to significant migration of Salvadorans in the 1980s, continue to make inroads across the United States. Even if you’ve never before had a pupusa, your first one won’t seem entirely unfamiliar to you. The pupusa is a thick, hand-made corn tortilla stuffed with sundry ingredients. Unlike New Mexican tortillas, Salvadorian tortillas are made with no baking powder and very little (if any) salt. They’re roughly four-inches in diameter and made with a masa de maiz (cornmeal dough) rendering them somewhat similar texturally (albeit much thicker) and in flavor to corn tortillas.

When we asked about the genesis of the restaurant’s name, our server had but to point to a framed poster on the wall behind us and explain “that’s papaturro.” The name which had stumped us, it turns out, is the common name of a fruit with a semi-pulpous edible flesh. We had assumed the fruit to be a type of grape as it was shown in bunches clinging tenuously to vines. That poster is one of several festooning the walls of the cavernous restaurant which launched in January, 2016 in the complex that previously housed Pho Hoa, a very good Vietnamese restaurant which closed in 2014.

As is the case with so many mom-and-pop restaurants, El Papaturro did not launch to a flurry of fanfare and media coverage (contrast that to the press barrage prefacing the launch of the Cheesecake Factory). Predictably, therefore, business has not been exactly brisk though it has started to pick up thanks mostly to word-of-mouth. If our inaugural experience is any indication, satisfied guests will rave about their fantastic dining experiences at El Papaturro.

Mere satisfaction may be an understatement. El Papaturro is a restaurant sure to generate loyalty if only intrepid diners venture outside their comfort zones and trek to this exotic gem which despite a 4th Street address has poor street-front visibility. If you’ve never had Salvadorean cuisine, fear not. You won’t be inundated with a compendium of dishes you’ve never before encountered. The entire menu is relatively short, only three pages, with every item spelled out and described in both Spanish and English. You’ll be surprised how many dishes share names, if not flavor profiles, with Mexican and New Mexican foods with which you’re well acquainted. That includes tamales whose semblance to what we’re used to in the Land of Enchantment is rather limited.

The very first item on the menu is a Salvadorean Tamal made with corn flour, stuffed with chicken and served with sour cream. This tamal is sheathed in banana leaves, an ancient Mesoamerican cooking technique which imparts a very moist quality to any food prepared in them and imbues foods with a delicious herbal flavor. Unwrapping the banana leaves releases a steamy fragrance that prefaces an enjoyable treat. Unlike New Mexican tamales, there is no unwrapping of corn husks to get to the good stuff on the fresh corn tamal. Nor is it slathered with New Mexico’s prized red or green chile. It arrives denuded on a plate where it shares space with a dollop of sour cream. The fresh corn tamal is fried in oil and is intended to showcase the flavor of the corn masa from which is made. It does, in fact, have a flavor reminiscent of cornbread.

Technically you can stuff pupusas with virtually anything you want (chains would probably engorge them with burger patties or pizza ingredients), but trust your Salvadorean hosts to know what fillings work best. There are six different pupusas on the menu. We had three and regret not having one of each. The most basic pupusa is stuffed with cheese, a mild-flavored white variety which becomes soft when heated but doesn’t run and become oily. My favorite pupusa is made with cheese and loroco, a vine flower bud that grows throughout Central America. Loroco has a slightly astringent flavor somewhat reminiscent of quelites (lambs quarters). Pupusas are served with curtido, a sort of Salvadorean coleslaw made from pickled cabbage and flavor profile that crosses from coleslaw to sauerkraut. It’s quite good.

My favorite Mexican comfort food, especially on cold days, has become caldo de res, a traditional beef stew brimming with vegetables. My Mexican friends might disown me at this declaration: The sopa de res at El Papaturro is better than the caldo de res at any Mexican restaurant in town. There, I said it! By any name, this is a superb caldo or sopa (stew or soup). Few things in life are better than a large bowl practically running over with potatoes and cabbage with a solitary corn-on-the-cob and a large beef shank. Only a few carrots would have improved upon this near perfect dish. The corn-on-the-cob was sweeter than any we’ve had in recent years and the beef was much more tender than the shoe leather-tough beef too often served with this caldo. Tiny globules of beef marrow float on top of the soup, indicative of the slow and lengthy preparation time and a beef stock flavor that will make you swoon.

El Salvador may be the smallest country in Central America, but its cuisine has huge flavors. All intrepid Duke City diners should take a culinary expedition to El Papaturro, a restaurant that brings those huge flavors to life.