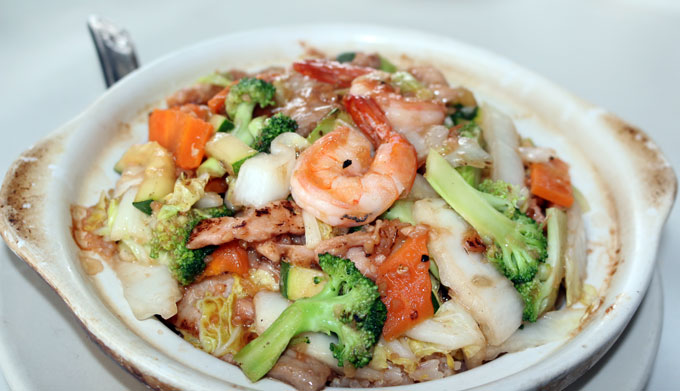 After far too many meals at restaurants in which children are either screaming at the top of their lungs, throwing hysterical tantrums or wandering unsupervised around the dining room, our inaugural meal at Que Huong proved a very pleasant surprise. Across the dining room, we espied a Vietnamese family with several young children. Theirs was the quietest table in the restaurant. All of them were completely focused on their meals. When my Kim commented on how well behaved Vietnamese children are, I reminded her of at least one Vietnamese child who doesn’t always behave as well as the children Kim was idealizing. In fact, that child is as candid and unfiltered as some adults, the antithesis of the precious little angels at Que Huong.

When her adoptive parents took Lily Pritchett-Tucker to a Vietnamese restaurant so they could teach her about her heritage, Lily became stubborn and outspoken….a true little diva. She refused her parents attempts to teach her anything about Vietnam. When her daddy told her about a “special soup called pho (pronounced “fuh”),” she responded “you told me not to say that word.” After repeated efforts to tell her more about the country of her birth, she shouted “I hate Vietnam,” a declaration which made the group appear horribly racist. The entire meal became a succession of intolerant-sounding, albeit wholly innocent comedy that escalated until the family realized it was time to beat a hasty exit.

Some of you may recognize that scene from an episode of Modern Family, an Emmy Award-winning television mockumentary. Though entirely fictitious, that scene spawned a debate between my Kim and I about children in restaurants. My pop psychology theories as to why the Vietnamese children at Que Huong behaved so well included everything from attributing their behavior to a hyper-disciplining “tiger mom” to crediting the elevator music piped in through the restaurant’s sound system for making the children sleepy. Finally, my Kim, who’s much smarter than I, chided me for not having attributed the children’s behavior to the food. Her theory had a lot more validity (and common sense) than mine.

Great food–even moreso than music–has charms that sooth the savage breast…or child. A great meal can usurp even great conversation…or at least provide a temporary surcease from talking until appetites are sated. Our question was “is the food at Que Huong so good, it can keep children from being themselves?” Alas, in subsequent visits we haven’t had the opportunity to reprise our observations. We have discovered for ourselves, however, that when we’re sharing a meal at Que Huong, our conversation tends to be about the meal itself, not our day-to-day shop talk. More often than not, we’re discussing how much we’re enjoying a particular dish.

Que Huong, a Vietnamese term which translates to “hometown” sits at the corner of Central and Louisiana. It’s directly across Louisiana from the Talin Market World Food Fare, New Mexico’s largest international foods market. Que Huong’s Web site boasts of the “most authentic Vietnamese food in Albuquerque!” and of serving “unique delicacies that will keep you coming back and bringing your friends and relatives!”. It’s one of only a handful of Vietnamese restaurants in the metropolitan area open for business on Sundays. In fact, Que Huong is open seven days a week and remains open until 9PM every day.

Excluding beverages, there are 115 items on Que Huong’s menu. It’s a veritable compendium of Vietnamese cuisine, showcasing everything from pho to noodle bowls and rice dishes. You could sample something new every day for nearly four months, but chances are you’ll find something wonderfully addictive from which you’ll be hard-pressed to deviate. For me, that one beguiling temptress is durian shakes. Considered the “stinkiest fruit in the world,” durian is an acquired taste, one which even bizarre food gurgitator Andrew Zimmern can’t stomach. Servers at Vietnamese and Thai restaurants still give me “are you crazy?” looks every time I order it, but it’s one of my favorite beverages.

In ancient and contemporary cuisine across Greece, the Middle East and Eastern Europe, stuffed grape leaves are a ubiquitous dish. Though not indigenous to Southeast Asia, grape leaves have found their way into Vietnamese cuisine, a remnant of French colonization. Large grape leaves are rolled with a mixture of ground beef, cilantro and scallions seasoned with various herbs and spices then served with fish sauce. Though served five per order, the stuffed grape leaves at Que Huong aren’t quite as sizeable as dolmas at local Greek and Middle Eastern restaurants tend to be. In terms of flavor, dolmas and Vietnamese grape leaves are worlds apart, as different as night and day. Both are uniquely delicious onto themselves.

The menu lists two sandwiches. One is the grilled pork chicken or vegetarian banh mi. The other is called a “Beef Stew Sandwich” even though it’s far from a conventional sandwich. It is essentially an appetizer-sized bowl of beef stew Vietnamese-style. What makes it a sandwich is the baguette which accompanies the beef stew. Crispy on the outside, soft and pillowy on the inside, the baguette is perfect for dredging up the luscious stew. Talk about comfort food. The steamy, fragrant beef stew does indeed include beef chunks along with sliced carrots, scallions, white onions and noodles. It’s redolent with star anise and fresh herbs which coalesce into one uniquely wonderful, delightfully addictive flavor.

Clay pot cooking is popular throughout Asia where the clay pot is used as both pot and serving dish. One of the more endearing qualities of a clay pot is its ability to retain heat, to the point at which the rice at the bottom of the pot tends to caramelize into an even more delicious version of itself. The “Que Huong Special” is the restaurant’s version of a sizzling clay pot dish, a combination of chicken, beef, pork, shrimp, crab meat and vegetables (broccoli, zucchini, mushroom, carrots and peas) stir-fried with a special sweet-savory sauce. As delicious as it is, this dish is both too hot and too large to finish in one sitting. Leftovers are just as good.

Since May Hong introduced her to patter noodles, a large rice noodle sheet in a cheesecloth pattern, my Kim has searched this dish out at every Vietnamese restaurant we frequent. Que Huong’s version is called a vermicelli pattie and it’s served with grilled beef. The grilled pork is marinated with the sweet spices of anise and cinnamon to create an olfactory treasure that dances on your taste buds then it is topped with crushed peanuts and scallions. It’s traditional to wrap the pork first in patter noodles then in lettuce leafs with cilantro, julienned carrots, daikon, ribbons of cucumber, bean sprouts and fresh mint leaves inside. These lettuce wraps are then dipped in Que Huong’s pleasantly piquant fish sauce. If freshness has a flavor, it tastes something like this dish..

It may be debated as to whether or not it’s the deliciousness of Que Huong’s menu that causes children of all ages to behave well and focus exclusively on their meals. What isn’t up for debate is that this restaurant is one of Albuquerque’s favorite Vietnamese restaurants, a restaurant worthy of the “hometown” designation.