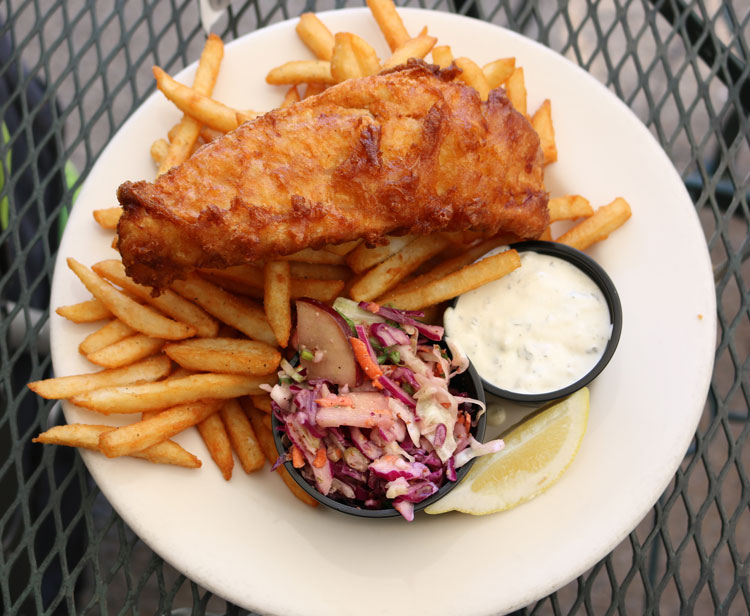 In 1913, French mathematician Émile Borel introduced a thought experiment that has come to be known as the infinite monkey theorem. Essentially, the theorem posits that a single monkey hitting keys at random on a typewriter keyboard for an infinite amount of time will eventually type a given text, such as the complete works of William Shakespeare. Espying a sign bearing the name Llanfairpwll-gwyngyllgogerychwyrndrob-wllllantysiliogogogoch when we visited the island of Anglesey in Wales, we wondered if that monkey had been set loose on the sign bearing the village’s name.

When Kim asked me to try pronouncing the 58-character name (which actually translates to “Saint Mary’s Church in the hollow of the white hazel near a rapid whirlpool and the Church of St. Tysilio of the red cave”), I told her locals just called it “Llano” for short. As soon as she remembered Llano is actually a “suburb” of Peñasco, she had a few short names for me. Our visit to the “Welsh Llano” came to mind when our debonair dachshund, The Dude and I visited the Quarter Celtic Brewpub. If Welsh naming conventions hold true, I had to wonder if its full name would translate from Welsh to “the Quarter Celtic Brewpub on the northeast intersection of San Mateo and Lomas in the lower-level of the Ace Hardware Courtyard Shopping Center.” Welsh, after all, is one of six remaining Celtic languages, maybe the most difficult.

Alas, the story behind the name “Quarter Celtic” isn’t quite as interesting as an infinite number of monkeys on a keyboard having come up with its name. Essentially, the genesis of the name is derived from the Celtic lineage of the brewpub’s three founding partners. One is a quarter Irish, one a quarter Scottish and the third is a quarter Welsh. Thematically, a quarter of the brewpub’s ales are Celtic by style and a quarter of the menu is comprised of Celtic fare. The feel, however, is 100 percent neighborhood pub, with several shout-outs to Ireland and Great Britain where traces of the Celtic language and culture are most prominent today. Those include the proud flags of each traditionally Celtic nation. The brewpub’s logo—a keg complete with tap–is fashioned in the stylized graphical representations of knots which are used extensively in Celtic art. It’s really quite clever.

Long-time denizens of the Duke City who might not be familiar with the “Ace Hardware Courtyard Shopping Center” need only recall this retail space was once named “Fashion Square” back in the 90s and counted among its tenants Kistler-Collister, home for fashion among the well-heeled. More recently, the space in which Quarter Celtic sits was home to Freemont’s Fine Foods, one of the city’s oldest family-owned businesses. Several high-end restaurants occupied the space before that. The Quarter Celtic Brewpub has transformed the 7,300 square-foot milieu and sprawling dog-friendly patio into an attractive spot that despite not having a street-level storefront facade, appears to have a very loyal and captive following.

It’s easy to ferret out the quarter of the menu that’s comprised of “Celtic fare.” Simply look for dishes you’ve had at any Irish or Scottish pub across the fruited plain or across the pond. That means Scotch eggs, shepherd’s pie, fish and chips, corned beef and cabbage and the like. It’s contemporary cuisine, certainly not what ancient Celts (a very carnivorous lot) would have enjoyed. Some items on the menu probably can’t be attributed to the Celts, but they’ve got cutesy contemporary Celtic names such as “Sullivan’s salsa and guac” and “shillelagh sticks.”

The hearty housemade Quarter Porter Stew (a medley of fresh vegetables, beef and quarter Porter served with soda bread) will certainly warm you to your bones on a harsh winter day in Ireland, Scotland, Wales or Albuquerque. It’s brimming with ingredients and flavor though it doesn’t have as much beef as carnivorous Celts might want (especially if they’re dining with a dachshund who demands his share). The vegetables are somewhere between soft and crispy, the way they should be. The soda bread, a pretty basic bread, is dense and wholesome. It’s a great bread for sopping up the stew.

Because potatoes are a “new world” vegetable introduced to Europe in the 16th century, ancient Celts didn’t eat fish and chips, but their descendants certainly do. Today, there are some 11,000 fish and chip shops throughout Ireland and the United Kingdom. Fish and chips are very popular on this side of the Atlantic, too. Quarter Celtic’s fish and chips (available in whole and half portions of beer-battered fried fish served on a bed of chips (fries) with a side of coleslaw) are a good option. A half-order consists of one golden-hued plank of flaky, tender fish. Though the housemade tartar sauce is quite good, a hearty dousing of malt vinegar is my preferred way of enjoying fish and chips. The chips have that nice absorbing quality that good chips should have. The coleslaw didn’t have much personality other than a nice crunch.

If an online English to Welsh translation program is to be believed, Quarter Celtic would be translated to “chwarter Celtaidd” in the Celtic language of Welsh. By any name and in any language, the Quarter Celtic is a very good option when you want to feel like you’re somewhere near the North Sea.