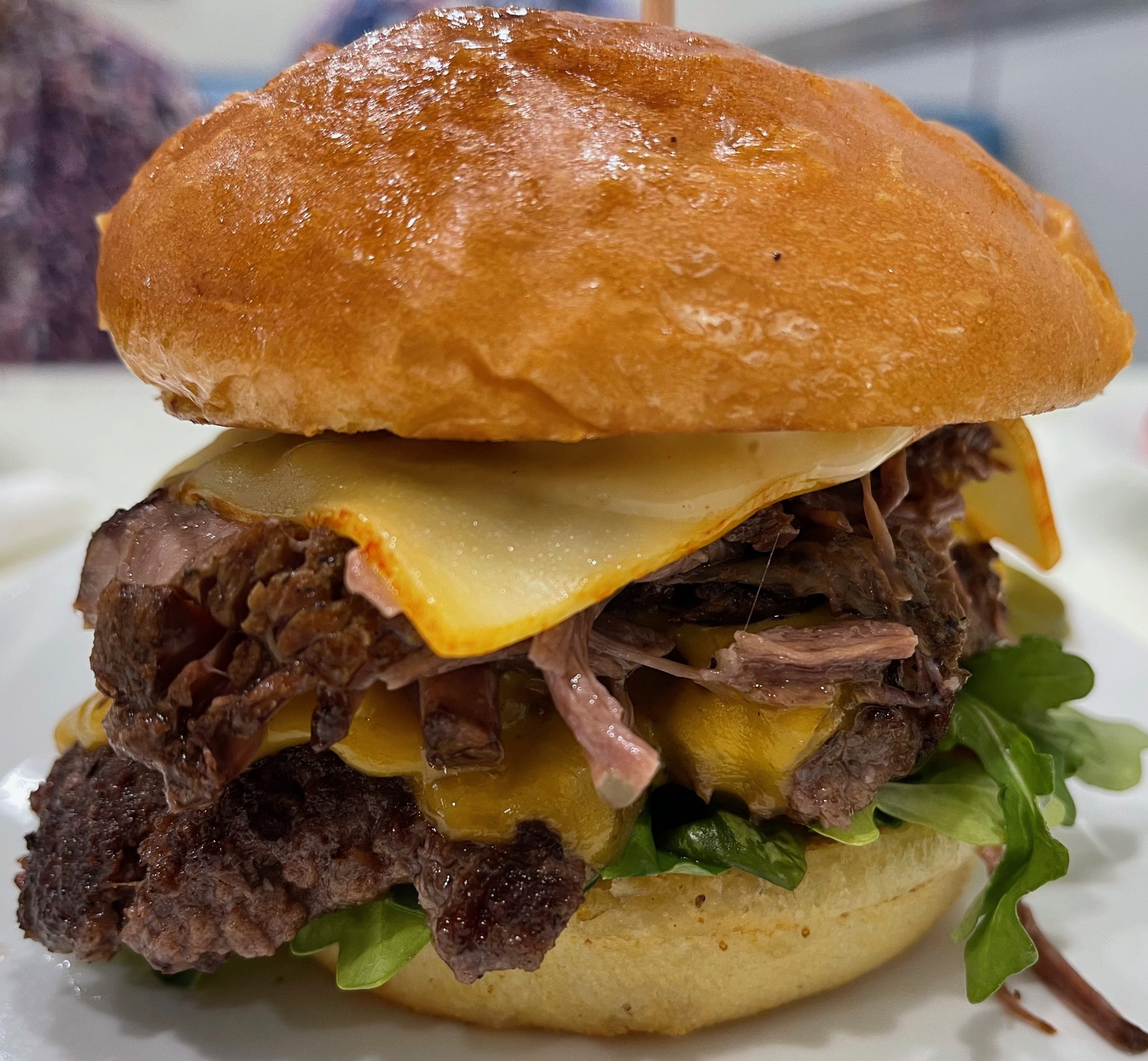 My friend Schuyler used to joke that every meal we enjoyed together was “upscale” because “up” was the direction his scale climbed when we finished our marathon meals.  We were quite the trenchermen in our youth, bona fide threats to any all-you-can-eat buffet in town.  Back then–as impoverished junior noncommissioned officers in the Air Force–ten dollar meals were near the upper end of we could afford with an occasional fifteen dollar splurge.  Back then, some thirty years ago, you could get quite a bit of food for ten dollars.  Fast forward a few decades and the term “upscale” has a different meaning for both of us.  We have both been able to reap the harvest of our hard work and are able to (on occasion) afford upscale restaurants that features fine-dining.

Back when a dollar would buy four burgers at Griff’s, we couldn’t have conceived of any burger being considered “upscale.”  Not even the most sage of soothsayers could possibly have had the prescience to predict the price of burgers exceeding ten dollars.  Today, it’s not uncommon to find burgers flirting with the twenty dollar mark (maybe that’s what “build back better” means).  That price point is justified by such labels as grass-fed, local ingredients, artisanal condiments, made-to order and organic beef.  Restaurateurs have seen our demand for high-quality burgers and they’ve jumped on the opportunity.  They’ve heard us rage against unhealthy franchised fast food burgers and they’ve offered a much better–and more expensive–alternative.

At its launch Upscale Burgers & Shakes operated as a “ghost kitchen” which opened its virtual doors in December, 2020.  As a purveyor of upscale burgers, it checked all the boxes: “a much healthier option than the drive-through burger joint; everything made from scratch brioche buns and sauces; fresh in-house ground short-rib, sirloin and chuck blend; sourcing only the best ingredients; a local restaurant with a passion for good, clean, rich food.”  Unlike some ghost kitchens, Upscale Burgers & Shakes did have a brick-and-mortar presence.  It was located within the comfy, cozy confines of Lily & Liam Bistro, one of the City of Vision’s most popular up-and-coming eateries.

While Lily & Liam Bistro strictly offers breakfast and lunch Monday through Sunday, Upscale Burgers & Shakes had somewhat more abbreviated hours of operation.  For expediency, you could place your order on the restaurant’s website and  have your meal delivered to your car at a time you designate.  You could also have your meal delivered to your home via DoorDash.  The process fits right in with what my friend Captain Tuttle calls the “new now.”   While the ordering process is easy, picking up food to eat at home isn’t as satisfying as dining in–especially if you’ve got to ferry your fare half-an-hour.

We found the online menu somewhat disjointed.  There was a section called “most popular” which listed only four items.  Then there’s a section that lists everything else and not necessarily everything of a type together.  Ideally the six burgers on the menu would be grouped together, but that wasn’t the case.  Similarly the shakes, desserts, beverages and chicken tenders weren’t grouped together.  For the compulsively well-ordered among us, it took some getting used to.  Maybe the intent was to make us peruse the entire menu to see just how many delicious options are available.   If that’s the case, mission accomplished.

27 January 2021: True to the restaurant’s name, shakes featured prominently on the menu.  There were four of them: vanilla, chocolate, berry, turtle custard.  You’ll also find four old-fashioned floats: black cherry, root beer, cream soda and Coke.  Having been acquainted with Lily & Liam’s magnificent turtle cheesecake made my choice easy.  A turtle custard shake (caramel, ganache and pecans) it would be…or at least that’s what I ordered.  Even after getting it home half-an-hour later, there’s no way even a Hoover high suction vacuum cleaner could have sucked it up–much less a straw.  The “custard” was still hard.  Nary a pecan or pecan piece was to be found.  As an ice cream dessert with caramel and ganache, this was a pretty good dessert.  As a shake, it didn’t pass muster.

27 January 2021:  The green chile double (Cheddar, green chile, lettuce, tomato, onion, Upscale sauce) was precisely as advertised.  Thankfully the burger was constructed on housemade brioche buns because a standard vendor-provided bun would have collapsed under the weight and moistness of the two thick beef patties constructed from a fresh in-house ground short-rib, sirloin and chuck blend.  This burger is all about the beef and this is great beef with its complex mix of fat an umami gussied up in a process called the Maillard reaction (thank you, Becky) — the browning that happens when we cook a piece of meat. Cheddar runneth over and the green chile has a pleasant piquancy.  Only the Upscale sauce got a bit lost among the massivity of other ingredients.

27 January 2021: Another way in which upscale or gourmet burgers are making their mark is by not subscribing to the age-old template that the canvas upon which to pile on other ingredients has got to be a hamburger bun.  Hence the chipotle tortilla (tortilla, Muenster, avocado, chipotle aioli, jalapeño, tomato, iceberg, red onion and of course, the fresh in-house ground short-rib, sirloin and chuck blend patty).  This is a burger replete with personality and flavors that go very well together.  A few additional jalapeños would have made the burger even more to my liking, but not everybody is a fire-eater.  As with the green chile double, the chipotle tortilla is accompanied by a rather good jicama melon slaw and kettle chips.

3 June 2022: The ghost kitchen concept proved so successful that in April 2022, Upscale Burgers & Shakes relocated to a brick-and-mortar establishment “just down the hill” from Rio Rancho.  Now situated in the space that previously housed Johnny Rocket’s, Upscale plies its concept on the ground floor of the Cottonwood Mall immediately next door to the Regal Cinema.  The capacious space has undergone a significant make-over.  Cobalt  blue and white walls and pristine wood flooring give the restaurant a touch of modernity that still hearkens back to the days when burgers, shakes and fries ruled.  Seat yourself in one of the comfortable booths, tables or plaster yourself in a countertop seat with an up-close view of the kitchen in action.  Your server will attend to you in short order.

The menu has also undergone somewhat of a make-over though it still includes the enigmatic “Most Popular” section (I’d love to see the algorithms that determine what goes into this section.)  Other menu sections are dedicated to sandwiches, salads, upscale burgers, entrees, classic burgers, shakes, drinks and desserts.  It’s not as unwieldy as the first online menu at Upscale.  Even better, the price points remain quite reasonable, especially considering the high quality and prodigious portions.  There are only two degrees of doneness available on your burgers–“cooked through” or “a little pink.”  Not surprisingly, there isn’t a significant difference between the two.

3 June 2022: Five salads–grilled chicken cobb salad, taco salad, house salad, strawberry and feta salad, and quinoa salad–adorn the menu, again priced reasonably.  The taco salad is one of two items (the other is the carne adovada burger) in which cumin is used.  When we ordered the strawberry and feta salad (grilled chicken, candied pecans, strawberries, feta, cucumber, tomato, greens) we reasoned it would serve as our appetizer.  Instead, that salad could have served as our entrée–not my entrée or my Kim’s entrée but one we could split between us.  We barely made a dent in it and took enough home for lunch the following day.  Not only is it a sizeable salad, it’s super fresh and delicious.  Where did Upscale find strawberries that sweet?  Where did Upscale find greens so fresh?  One caution–you might not want to pair blue cheese dressing with all the feta piled onto this salad unless you want to wreck your breath for a week.

3 June 2022:  One of the seven burgers categorized as “Upscale Burgers” is the Bistro Burger (braised short rib, burger patty, arugula, bell peppers, cheddar, muenster, au jus).  Now, meat on meat isn’t for everyone, but if you identify with Clara Beller’s immortal utterance of “where’s the beef?” this burger is for you.  Not only is the beef patty a behemoth, the portion of braised short rib is almost main entree generous.  This is truly a carnivore’s dream though the richness of all that meat almost did me in.  Good as it was, maybe some hot mustard would have helped cut the richness.  The arugula and bell peppers did their best, but they were almost lost underneath all that protein.  Then there are two cheeses (Cheddar, Muenster).  It’s almost too much of too many good things.

3 June 2022:  For diners eschewing bread in favor of bread alternatives, one option (albeit not necessarily greatly reduced in calories) is the steak burger frites (two seared burger steaks, potato wedges, mushrooms, bacon onion jam, arugula, au jus).  Just don’t make the mistake of confusing “burger steaks” with rib eye steaks, Porterhouse steaks or even prime rib.  Burger steaks are thick, charred burger patties.  And if you’re used to frites as thin as matchsticks, you’re in for a surprise.  The potato wedges are Texas-sized, thick-cut and (probably) baked wedges of potato.  A more pleasant surprise is the fresh mushrooms which impart even more umami to an umami-rich dish.  There’s so much umami, in fact, that you might just want to ask for more bacon onion jam to cut through it.

3 June 2022: Chantilly cream, or more appropriately crème Chantilly, is a sweetened whipped cream, originated in small town of Chantilly, France. Chantilly cake, on the other hand, can refer to two different kinds of cakes. In the South, Chantilly cake is a vanilla cake topped with fluffy, sweetened whipped cream (or whipped mascarpone). This version was “invented” in New Orleans. In Hawaii, a Chantilly cake is a chocolate cake with coconut frosting.  Upscale’s rendition is made of light and airy sponge cake layers.  Each of the middle layers is slathered filled fresh berries and more sweetened cream.  It’s an incredibly light cake with a burst of fresh berries in every bite.  Though we enjoyed several Chantilly cake slices in the Deep South, we’ll take the Upscale version any time.