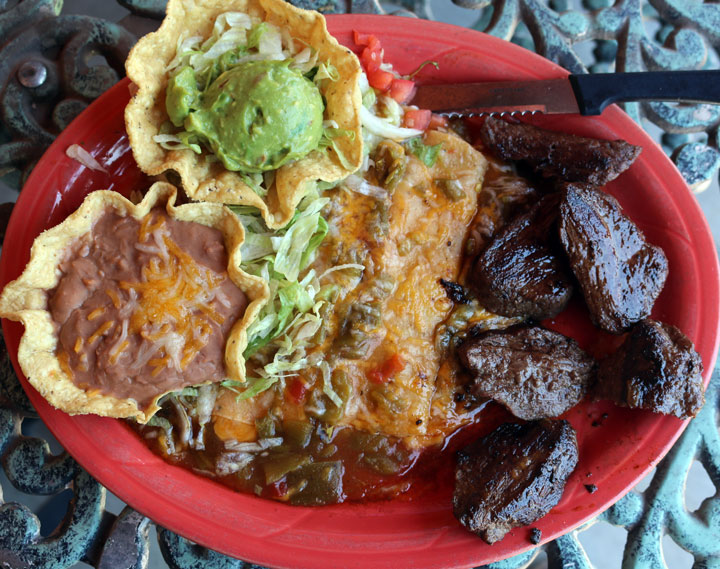 My friend Scott Pacheco may never forgive me for dining at Little Anita’s New Mexican Food in Old Town. Scott hates Little Anita’s, but not because of its food, ambiance or service.  He hates Little Anita’s for what he considers a traitorous act on the scale of Benedict Arnold and Judas Iscariot. To understand why Scott hates Little Anita’s so much, it might help if you know that there are two things in life he’s passionate about–the Denver Broncos and New Mexican green chile. If this isn’t making sense yet, recall that on February 2, 2014, the Seattle Seahawks demolished the Broncos 43-8 in Super Bowl XLVIII. Not only was this the largest margin of victory for an underdog, it was tied for the third largest point differential (35) in Super Bowl history. Scott was (and still is) incensed at the “dirty” Seahawks, the “blind mice” referees and “biased” announcers.  His beloved Broncos had no chance against such a stacked deck.

So what did Little Anita’s have to do with the Broncos loss?  Actually nothing, but in Scott’s mind Little Anita’s still committed an unforgivably (albeit unwitting) traitorous transgression.  As is  Super Bowl tradition, dignitaries from competing cities engaged in a friendly wager, betting local foods and goods on their respective city’s teams?  Denver mayor Michael Hancock’s bet included green chile stew prepared by Denver restaurants, including Little Anita’s. To Scott, Little Anita’s green chile stew was far too good a treasure for the #*&$! team from the #&*#! city that trounced his beloved Broncos. Moreover, it was a very uneven exchange because Seattle’s mayor had wagered salmon which Scott claims doesn’t even go well with green chile. Scott’s hatred runs deep.  How deep? In October, 2014, when a raging conflagration consumed the Little Anita’s on the intersection of Menaul and University, he exclaimed “that’s the best thing Little Anita’s ever cooked!”

It’s possible, maybe likely, that the residents of Denver were just as upset as Scott at having to part with green chile stew.  That’s because Coloradans have an affinity for chile surpassed only by denizens of the Land of Enchantment.  Surely, they hated parting with some of the city’s best.  In Denver, one of the most popular purveyors of piquant red and green is Little Anita’s, obviously not a restaurant Scott Pacheco will visit when he travels to the Mile High City for a Broncos game.  Denver’s Westword, an alternative weekly publication, has accorded “best taste of New Mexico” and “best red chile” to this long-established New Mexico restaurant with four locations in the Denver area.

Before there was a Little Anita’s, there as simply “Anita’s,” founded in Northern Virginia (just outside the Washington, D.C. area) by Albuquerque native Anita Tellez in 1974. After living on the outskirts of the capital city and not finding anything approximating a taste of home, Anita decided to take matters into her own hands, converting an old doughnut shop into a restaurant showcasing authentic New Mexican red and green chile. Anita introduced the bustling area to family recipes rooted in traditional New Mexican cuisine and it was love at first bite. In its first year of operation, Anita’s generated $2 million. A second Anita’s followed 18 months later. Today, there are eight Anita’s restaurants with more to come.

In 1976, Anita’s eldest son Larry Gutierrez launched Albuquerque’s first Little Anita’s restaurant. Four decades later, it has grown to become one of the most popular and successful New Mexican restaurants in the metropolitan area with nine locations scattered throughout the city. According to the Little Anita’s website, the nine locations are positioned so that you’re never more than fifteen minutes away from satisfying your needs for great New Mexican cuisine. Another claim to fame is being the first in town to serve breakfast burritos back in the 1970s. Much as Scott loves breakfast burritos, he still can’t forgive Little Anita’s.

The Little Anita’s restaurant in Old Town is considered the local chain’s flagship restaurant…for good reason. It’s not only extremely popular with tourists, but locals seem to love it, too. During our visit we espied a large number of satisfied locals. Several of them shared the sun-shielding, dog-friendly patio with us and raved about their meals. Our waitress conceded that the red chile includes a bit of cumin, but pointed out that there are numerous alternatives sans cumin. Despite taking care of several tables both in the restaurant and on the patio, she was very attentive and capable.

We hadn’t been seated long before a basket of chips and bowl of salsa were ferried to our table.  The chips are on the light side, better made for dipping, not for scooping up Gil-sized portions.  For my Kim that’s a good thing because her salsa-loving husband can’t finish off the salsa after five or six chips.  The salsa lacks the piquant punch locals love (even tourists should be able to handle it without scalding their tongues) but it’s got a nice flavor.  Alas, a larger portion size would be greatly appreciated.

When New Mexicans talk about “threesomes,” it’s not always in a ribald manner.  Among local aficionados of New Mexican food, our favorite threesome is usually salsa, chile con queso and guacamole.  Little Anita’s version, called the Trio, substitutes a bean dip for the salsa.  The chile con queso is thick, creamy and served warm, but the aforementioned chips made it difficult to scoop up much of it.  We also have a bone to pick about the guacamole which is served atop shredded lettuce.  After just a little guacamole, all that’s left is the lettuce.  The bean dip, studded with green chile and shredded cheese, is flavorful but would benefit from a more potent chile.

Because of cumin’s presence on the red chile, both my Kim and I ordered from the “Hot From The Grill” section of the menu.  We’re both happy we did.  As little regard as I have for most steak, Little Anita’s steak asada combo really made me happy.  This was an excellent cut of beef,  ten ounces of grilled top sirloin prepared to order and sliced into five medallions.  The grilled flavor impregnates every morsel of the tender steak on which you won’t find any excess fat or sinew, just flavor.  What makes this a combo plate are two enchiladas served with your choice of red or green chile and two tostadas, one with guacamole and one with frijoles.   As with the salsa, the green chile is rather anemic.  The frijoles tostada needed salsa to give it some personality.

In keeping with her carnivorous ways, my Kim ordered the fajitas (your choice of half a pound of beef, chicken or shrimp served over sauteed bell peppers and onions on a sizzling hot skillet served with beans, pico de gallo, sour cream, guacamole, salsa and three home-style flour tortillas).  As with all great fajitas, the sizzling skillet wafts past everyone in the area until it arrives at your table.  While the beef isn’t quite as delicious as the steak asada, it’s still tender and plenty good.  Sweet white onions are sweated until they glisten with a translucent gleam.  They pair very well with the beef while the sour cream and guacamole lend a bit of contrast.  The flour tortillas are a nice vehicle for the fajitas.

Two sopaipillas were served with our plates, alas served with honey-flavored syrup, not the real stuff.  It makes a difference though not even native New Mexicans can always tell the difference.  Nor do these sopaipillas puff up in the tradition of all great “sofa pillows.”  Though brought to our table with wisps of steam escaping when we cut into them, they were dietetically thin.

You might consider my friend Scott’s antipathy toward Little Anita’s a bit short-sighted. After all he’s depriving himself of New Mexican food and you can never have enough of that. Another way to look at it is that his self-imposed abstinence just means there’s more Little Anita’s for the rest of us.