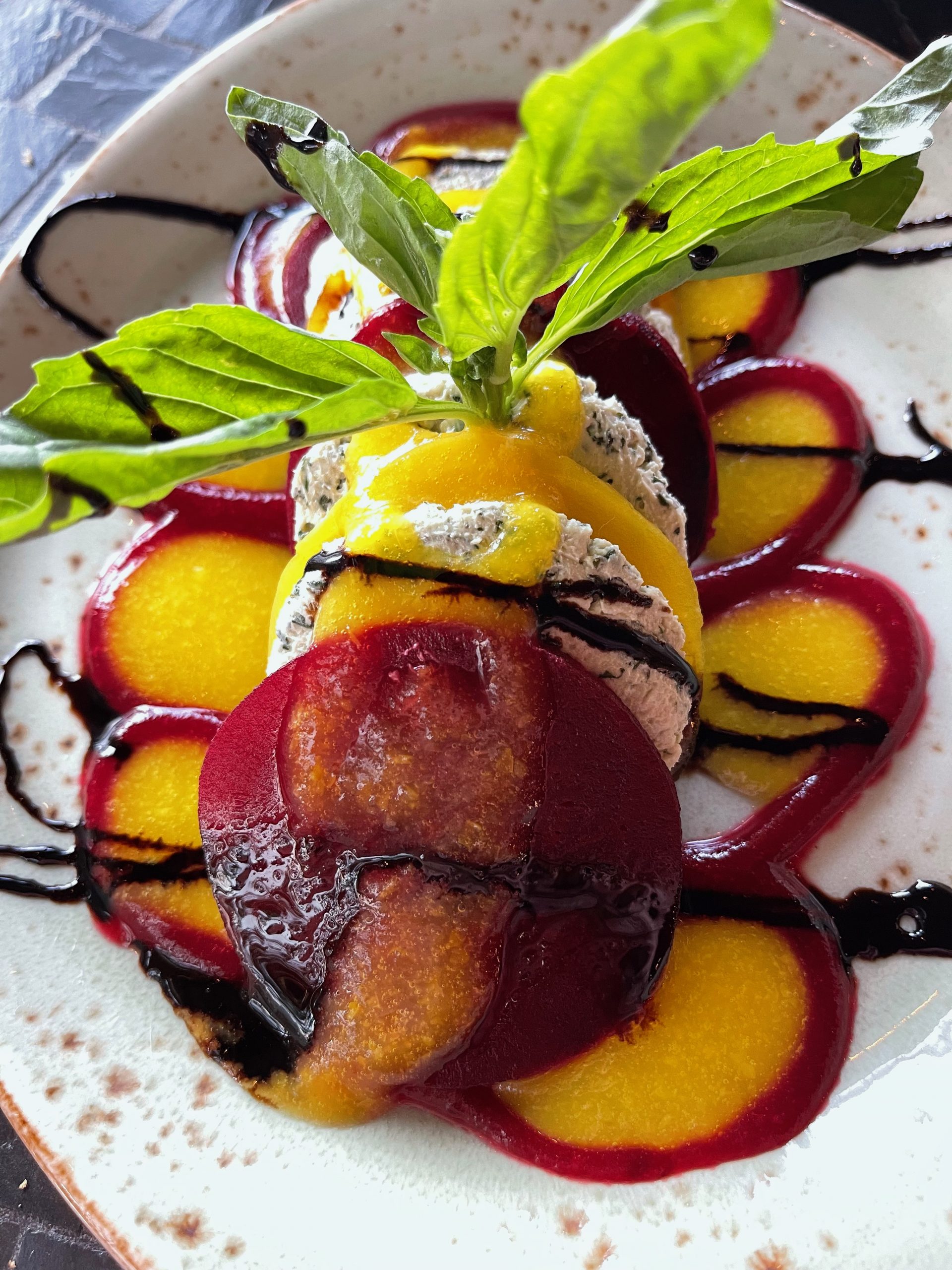 My Kim didn’t buy my explanation that Moab is an acronym standing for “Mother Of All Buffets.”  She did find my legitimate explanation viable.  I explained that Moab means “a land just short of the Promised Land,” a name bestowed  because the Moab valley was a verdant oasis in the middle of a desert.  Moab first appears in the Old Testament book of Genesis and is situated in ancient Palestine just east of the Dead Sea where Jordan now lies.  Because of the physical similarities to the desert jewel of the Old Testament, the small Utah town founded by Mormon settlers in the 1800s was dubbed Moab.

When we first visited the Moab area nearly three decades ago, its breath-taking topography and emerald skies called to mind a term synonymous with “a land just short of the Promised Land.”  Never mind the Blue Ridge Mountains and Shenandoah River of John Denver’s “Take Me Home Country Roads.”  Even more than West Virginia, the Moab area was “almost heaven.”  More spectacular than Sedona, more wondrous than Taos, more otherworldly than Abiquiu, the Moab area was quite simply an awe-inspiring idyll.

Because life…and mostly work, gets in the way, it took us nearly thirty years to return to the little town that had captured our imaginations and affections.  While Moab itself has become more crowded with visitors from across the world posing for selfies in front of majestic red rock formations and the natural rock columns known as hoodoos, it has retained an enrapturing charm.  Moreover (for me), it has become a highly respected dining destination with restaurants you’d expect to find in a large metropolitan area.  For this gastronome, culinary culture is a reason to visit.

One of the most highly regarded dining establishments in Moab is the aptly named Desert Bistro.  Surprisingly this epitome of fine dining is ensconced in a circa 1892 adobe structure that once served as the original dance hall for Moab.   That original structure consisted of the entry and dining areas.  Capacious, dog-friendly patios have been added for al fresco dining on starry nights.  The moon was full on the night of our visit and though partially obscured by the smoky haze of a California wildfire, that full moon added to a romantic ambiance.

Having studied the menu before our trip, we had pretty much decided to sate our carnivorous cravings with one of the game meats on the menu.  That was before Bridget, our comely server, told us about the fresh seafood offerings flown in daily from the Pacific Northwest, Alaska, and Hawaii.  To find high-quality seafood in a landlocked state is always a surprise, especially in a small town several hundred miles from any heavily populated city.  The menu, by the way, is an unexpected delight.  We hadn’t expected to find such elegant, innovative cuisine obviously prepared with love.

We did expect to be blown away by the Desert Bistro’s fabulous homemade bread.  Every review we had read was effusive in its praise for that bread, a honey whole wheat bread served with three delightful accompaniments––a rosemary honey butter, olive tapenade, and combination of lavender canola and pumpkin seed oils with fresh lavender atop. All three were magnificent, with the butter being our favorite.  Though the sculpted rosemary honey butter was served cold, it melted quickly into the warm bread.  It took tremendous restraint not to gobble the entire loaf, but we didn’t want to fill up before enjoying the rest of what promised to be a superb meal.

A half-dozen appetizers grace the menu, each more inviting than the next.  We actually contemplated having an all appetizer meal and would probably have been well satisfied, but the entrees proved just too intriguing.  Just as we had settled on which two starters would festoon our table, Bridget regaled us with a description of the appetizer special flown in from Hawaii: seared sushi grade sashimi.  Her enthusiastic descriptions, by the way, would probably read better than any of the tired adjectives I’ll used to describe our meal.  Bridget’s knowledge of the menu was encyclopedic, her reverence for the restaurant was ambassadorial.

Knowing I’d likely get to enjoy most (if not all) the sashimi myself, devoted husband that I am, I let my Kim decide what two appetizers we would share.  Red and golden beets (served with fresh basil pesto and chèvre, served with yellow bell pepper purée and balsamic reduction) are always a no-brainer.  If they’re on the menu, that’s what we’re going to have.  These were wholly unlike any beets dish we’d ever have.  Sandwiched between each beet is a delicious disk of creamy, tart, earthy goat cheese–as good a foil for beets as we’ve found.  The yellow bell pepper purée and balsamic reduction added both color and contrasting flavors to both the beets and the goat cheese, tempering their earthiness while enlivening their sweet properties.

We’ve been on a dates kick ever since a May, 2021 visit to Mas Tapas Y Vino where über chef Marc Quiñones enthralled us with a dates plate that demonstrated a higher state of deliciousness.  As someone with an aversion to overly sweet fruits, combining dates with savory ingredients has made a believer out of me.  Similar to the dates at Mas Tapas Y Vino, the pairing of sweet and savory flavors on Desert Bistro’s baked bacon-wrapped dates (stuffed with chèvre and drizzled with pomegranate molasses) was an absolute winner.  Bridget advised us to drench the dates into the coffee laced pomegranate molasses at the bottom of the plate.  Great advice!  Each bacon-wrapped date was like a nugget of pure gold, like a meat candy we couldn’t put down.

Years of experience have made me wary of dishes that could have been contrived by Rube Goldberg.  You know the type–overly complex preparation methods, disparate ingredients, overworked sauces.  At first browse, some of Desert Bistro’s menu items may have seemed Rube Goldbergish, but the proof, of course, is in the execution.  As we would discover, under the learned hands of Chef-Owner Carl Kelley, every ingredient has its place, blending well with every other ingredient to a cohesive whole from its singular components.  Chef Kelley knows what he’s doing!

The two fresh fish imports on the day of our inaugural visit were swimming in the Pacific waters of Hawaii just a few days prior to our visit.  My choice was monchong (lemon snapper), a firm deep-water, white fleshed fish with pinkish tones.  With a high oil content, clear white flesh and moderate, slightly citrusy (for a fish) flavor, it’s a fish that benefits well from a sauce.  Bridget raved about the tomato-leek-ancho-lime beurre blanc sauce which she assured me would bring out the best from the monchong.  Indeed, the sauce does that and more, elevating the lemon snapper to favorite new fish status.  In a throwback to a 90s plating style, the monchong was served atop calico rice pancakes and baby carrots.   It’s artsy and fancy, but we prefer our entrees and their accompaniments side-by-side.  Still, for a dish this delicious, we would have enjoyed it thrown together haphazardly.

My Kim’s choice, the Gorgonzola crusted beef tenderloin (served over roasted tomato demi-glace, accompanied by roasted garlic mashed potatoes and sautéed snap peas with radish) was presented in similar towering fashion.  Atop the tenderloin is a medallion of gorgonzola nearly as thick.  The gorgonzola, one of my favorite of all blue cheeses, emanates with salty, earthy and wonderfully sharp flavors that are counter-balanced by the tomato demi-glace which surrounds the tower like a moat.  The beef tenderloin lives up to its name with a tender, almost buttery texture.  Though beef tenderloin has a very low fat content, it, too, benefits greatly from the demi-glace (much better than any steak sauce).  The snap peas and radish were terrific complements.

After polishing off a chocolate walnut torte served warm with a side of vanilla bean ice cream,  it dawned on me that the restaurant could well be renamed Dessert Bistro and it would still be as good.  Bridget described the chocolate walnut torte as both her favorite dessert on the menu and “similar to, but better than pecan pie.”  When we lived in Mississippi those would be fighting words.  From Bridget, those words were prophetic.  This walnut torte was better than pecan pie with a similar richness, but slightly more savory notes.  The bitter notes of the dark chocolate blended so well with the buttery crust and that cold, creamy vanilla bean ice cream.

On our way to our car, we noticed a number of figs on the ground, likely felled by a stiff wind.  Chef Kelley confirmed those figs have been growing on the premises for years.  We congratulated and thanked him for a surprisingly great meal in the little piece of Heaven that is Moab, Utah.  Lesson learned: Don’t lower your expectations when dining in a small bistro in a small-town setting.  Sometimes the best things in life come in small packages.

The Desert Bistro has become yet another reason to love Moab, Utah, the land just short of the Promised Land.  It’s a high-end, fine-dining restaurant that would be a stellar player on any culinary market.