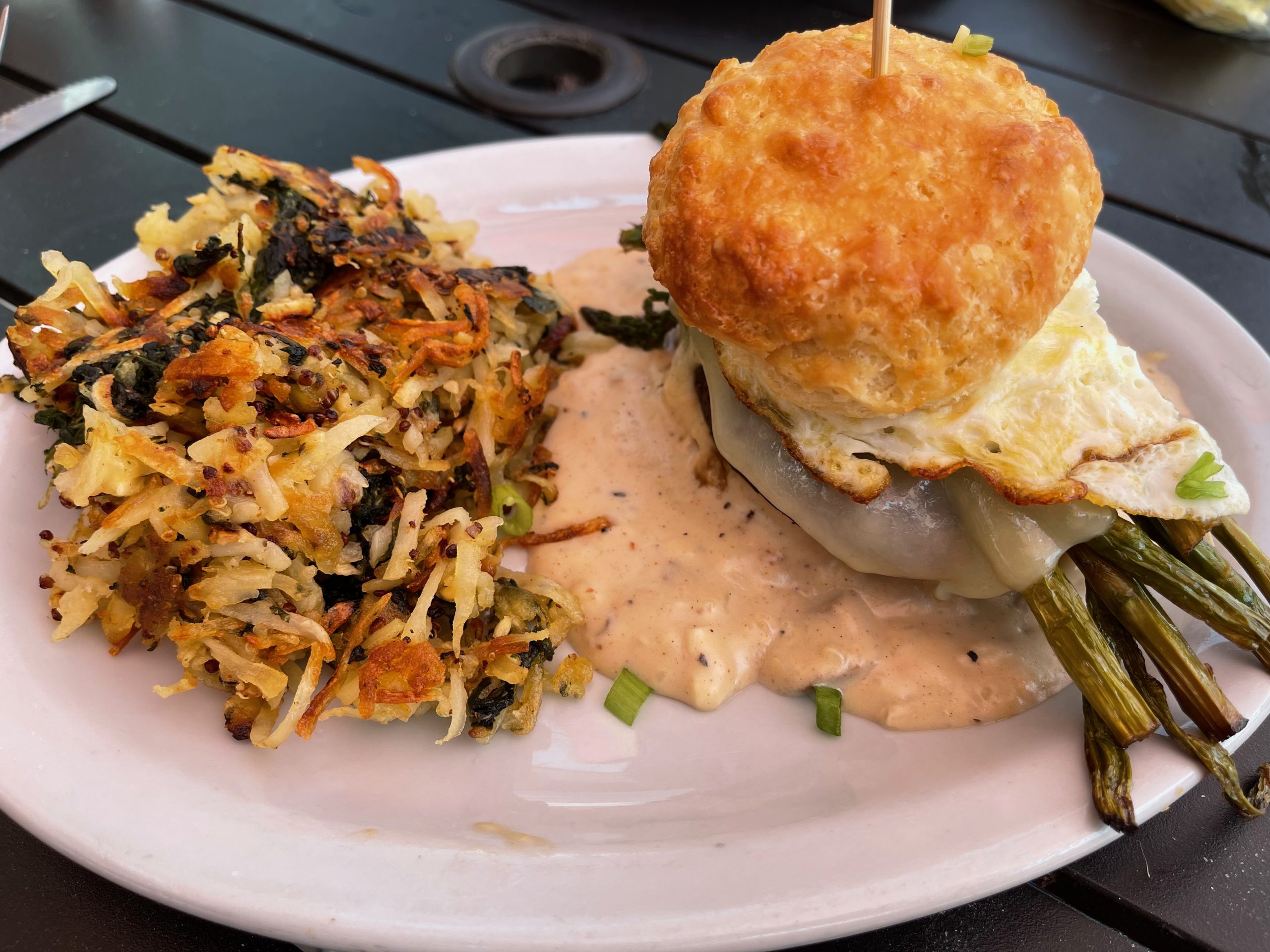 In 2008, Natchez, Mississippi, was officially named the Biscuit Capital of the World, a process which took three years of research by Chef Regina Charboneau.  Just our luck, the Natchez native and French-trained chef began serving her famous biscuits at her Twin Oaks Bed & Breakfast in Natchez a decade after our last visit to the “Antebellum Capital of the World.”  While we didn’t get to partake of Chef Charboneau’s celebrated biscuits (revered by the Rolling Stones), our breakfasts in Natchez were memorable because biscuits in the Mississippi River town are truly “biscuit capital” worthy.

In the quarter-century plus since we lived in Mississippi, we haven’t missed the oppressive humidity or the politics (on par with New Mexico and let’s just leave it at that), but we’ve missed the patriotism, people and…maybe especially the biscuits.  Yes, I know biscuits are made everywhere across the country, but only in the South are biscuits a transformative flaky, buttery and ethereal experience.   Everywhere else most biscuits are floury hockey pucks–dry, tasteless disappointments not worthy of the butter, jam or gravy with which they’re slathered.

Not surprisingly, the last truly life-altering biscuit to cross my lips was in Charleston, South Carolina at the James Beard award-winning Hominy Grill.  Christened the “Charleston Nasty,” that biscuit was so good it would have made Ben Stein swoon (who knows what it would have done to Meg Ryan).  Admittedly we’ve had good biscuits across the Land of Enchantment.  What we haven’t had are great biscuits–the type of biscuits which imprint themselves delicately on your taste buds, lightly on your belly and permanently on your memories.  We certainly didn’t expect to come across that type of biscuit in Utah.

While researching dining opportunities in Salt Lake City, we definitely didn’t expect to discover such a wealth of restaurants specializing in breakfast and brunch.  Instead of the ubiquitous breakfast burritos of New Mexico, menus at restaurants in Utah’s capital city are bold enough to make biscuits one of the centerpieces of their morning meals.  The very best of them–according to the Female Foodies whose reviews we trust–is Sweet Lake Biscuits & Limeade.  The Female Foodies named Sweet Lake one of the “15 Best Restaurants in Salt Lake City” for 2021.  Ranking a very lucky 13th, Sweet Lake earned “best brunch” distinction.

Ever the skeptics, we didn’t think there was any way Sweet Lake’s biscuits could come close to matching the exquisite biscuits we enjoyed for nearly eight years across the South.  In fact, had it not been for the curious pairing of biscuits and limeade, we might not have visited Sweet Lake which started out as a fresh mint limeade stand at the downtown farmers market.  Well, that and an article from Southern Living Magazine claiming Sweet Lake served the “Best Fried Chicken in Utah.”  Fried chicken, limeade and biscuits–it sounded almost too good to be true.  It sounded like the Deep South.

The overflow seating restaurant with a commodious Dude-friendly patio has become one of the city’s most popular brunch destinations with lines of hungry patrons queuing up early.  Maybe it was just a coincidence that we got seated quickly, but it’s likely our Dude’s charm and beckoning eyes won over Sweet Lake’s greeter.  Natural shade is hard to come by at noonish.  Thankfully the restaurant provides sun-shielding umbrellas.  Bailey, our delightful server graciously brought over a bowl of cool water for The Dude who’s not exactly a fan of limeade.

Sweet Lake’s limeade menu is far better than any neighborhood lemonade stand.  Even their standard limeade–festooned with a mint leaf–is fabulous, truly setting a standard.  Exceeding that standard are such inventive limeade pairings as honeydew-cucumber limeade, habanero limeade, raspberry limeade, ginger limeade and an orange-raspberry limeade.  On a sweltering summer day, any of these (except perhaps the habanero limeade) will cool you off.  Bailey confirmed that on any given week, Sweet Lake uses 1,800-3,600 limes.  More than the creative pairings, it’s the profusion of limes that makes the limeade some of the best we’ve ever had.  We first sipped then slurped our way through the ginger limeade, the honeydew-cucumber limeade and the orange-raspberry limeade, relishing every single drop.

If limeade by itself could be so good, we reasoned the housemade chips and limeade salsa should not be missed.  The salsa is the color of lime rind (a lime’s outer skin), a deep green with peppery flecks.  Though we thought we discerned tomatillo on the salsa, Bailey told us the salsa was made from Serrano, cilantro and mint.  The Serrano imparted a mild piquancy that paired well with the refreshing qualities of the mint and the slightly citrusy notes of the cilantro.  The housemade chips were crispy and thin, better made for dipping than for scooping.

The Female Foodies strongly suggest diners order The Hoss (house biscuit, buttermilk bath fried chicken breast, cage-free egg, Daily’s bacon, local cheddar, house-made Tooele Valley sausage gravy, green onion) named for the owner.  So did Bailey who had to suppress a slight snigger when I mistakenly called it “The Hog.”  My Kim, who likens any type of gravy to slop, ordered The Hoss sans gravy.  For someone like me who could bathe in a good gravy, that’s a mortal sin, the price of living with and deeply loving an otherwise perfect woman.  Despite The Hoss’s nudity, it was as good a biscuit sandwich as we’ve had in a long time.  While gravy typically hides a lot of flaws in a biscuit, Sweet Lake’s biscuit was fully exposed with nothing to hide.

Three components made it a biscuit sandwich which could have come from the South.  First was the chicken, raised by Red Bird Farms in Colorado under healthy, ethical conditions.  Before that pulchritudinous poultry ever hits the deep fryer, it’s soaked at least overnight in a bath of buttermilk, habanero hot sauce and sundry seasons.  That accounts for a fried chicken that’s replete with flavor and moistness.  Second is the scratch-made biscuit, a fluffy orb of fat and flour, so moist and tender that it didn’t crumble and collapse.  I tried in vain to find out whether White Lily All-Purpose Flour, a Southern staple was used in baking them.  Third was Daily’s bacon, a thick, crispy, salty strip of pure deliciousness.

It’s disingenuous to call my choice, The T-Rose (house biscuit, portabella mushroom, cage-free over-easy egg, asparagus, local Swiss, house-made portabella mushroom gravy, green onion) a healthier breakfast choice.  That portabella mushroom gravy had all the qualities that make gravy the bane of health-conscious diners everywhere.  My arteries may be happy there wasn’t more of it on the plate, but my taste buds would have enjoyed a pint or six.  It was one of the best mushroom gravies I’ve ever enjoyed.    The portabella mushroom was meaty and earthy with plenty of umami.  Asparagus was a surprising addition, more often seen on an English muffin than on a biscuit.  It was grilled to perfection.

All too often I’ve seen menus purporting to flavor some dish or another with habanero.  All too often I’ve been disappointed in that the supposed habanero is as anemic as a bell pepper.  At the very least, a dish in which habanero is used should make your eyes water.  My expectation of impotence from Sweet Lake’s habanero hot chocolate was quickly rebuffed by Bailey who practically guaranteed it would be may caliente.  Indeed, it was.  This was no “habanero powder” dish.  Shards of the potent pepper floated above the frothy, foamy hot chocolate.  One found its way into my mouth so I chewed and ate it much to the detriment of my eyes, nose and throat.  It took at least five minutes before the tear gas effect wore out.  The habanero hot chocolate is not for the faint of heart.

It stands to reason that biscuits would also be part and parcel of the two-item desert menu.  Our choice between a dessert featuring strawberries and one featuring bananas was a literal toss-up.  Both would have been welcome.  The bananas bayou (biscuit, fresh cream, brûléed bananas, caramel sauce, slivered almonds, blueberries) was superb.  Not quite as rich as Bananas Foster, it was better than most cobbler, more satisfying than a banana split and as good as any biscuit-based dessert.  Just out of curiosity, we asked for a side of raspberry jelly to see how good that would be with pieces of biscuit.  Wow!

Sweet Lake Biscuits & Limeade may have been the most pleasant and delicious surprise of all the restaurants we experienced during our week-long stay in the Beehive State.  We never expected to find biscuits so Southern.