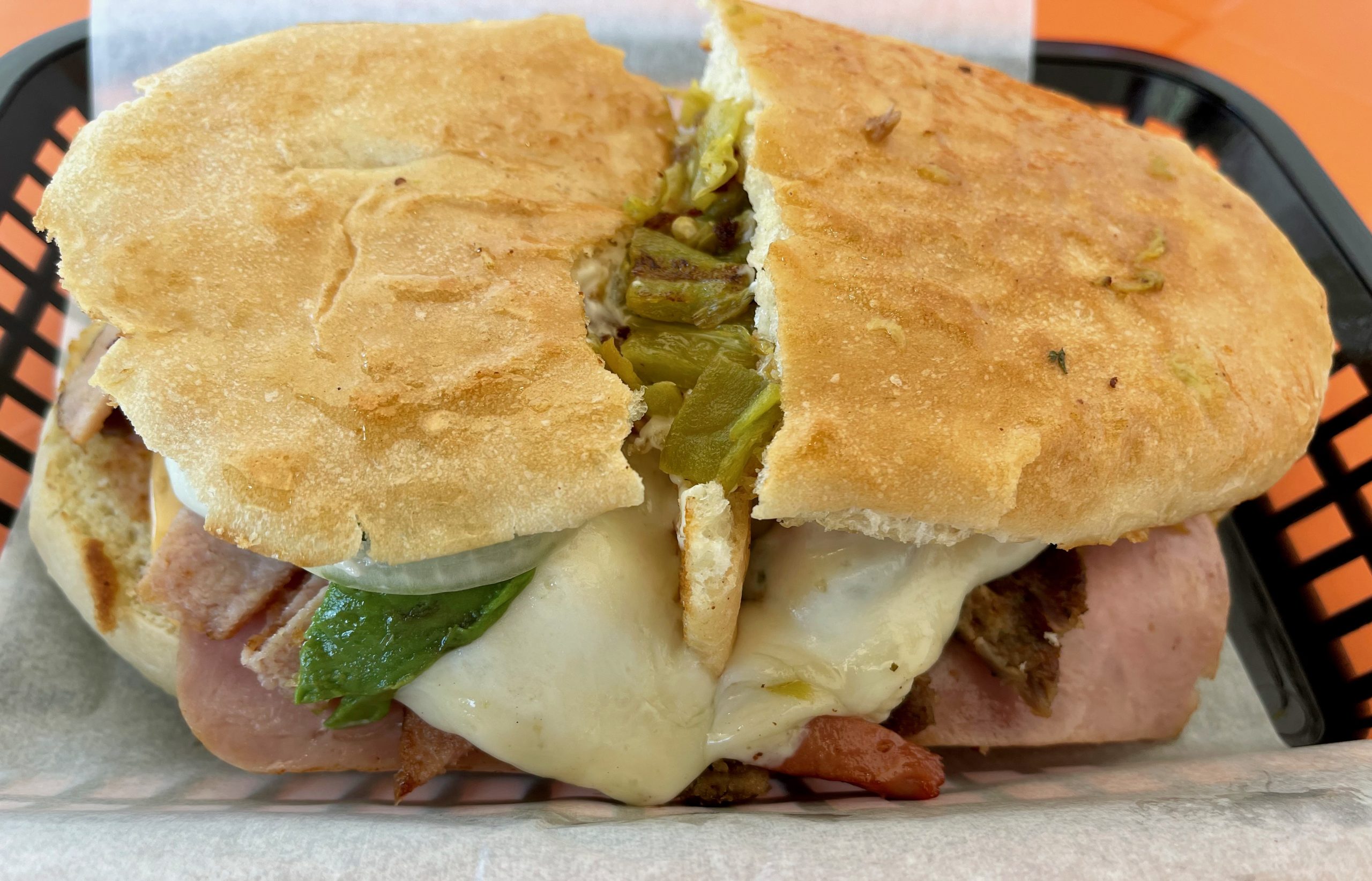 A survey of 2,000 Americans conducted by French’s Mustard in celebration of National Sandwich Day (November 3, 2021) revealed that 66-percent of Americans put between three and six condiments on their sandwiches, 44-percent of respondents believe condiments belong on both buns while 57-percent believe the most important part of a sandwich is the meat.  French’s poll revealed the cheesesteak is the most popular sandwich in America followed by the hamburger (which many people would argue is not a sandwich), barbecue pulled-pork sandwich, Italian and Reuben.  Had the survey polled Americans as to what sandwiches were on the ascent–those growing quickest in popularity–two sandwiches would have risen to the top.

Both of those sandwiches owe their genesis to French colonial rule.  First is the banh mi, a culinary fusion of two cultures: France and Vietnam.  A banh mi is an airy, crunchy French-styled baguette stuffed with a combination of meats, vegetables and other condiments. A melange of different textures and temperatures, bánh mì has an off-the-chart flavor profile: salty, sour, savory, sweet, and aromatic all simultaneously! As it has grown to become a staple in Vietnamese cuisine, so has its versatility.  Banh mi can be enjoyed for breakfast, lunch, dinner, as a snack or all of the aforementioned.  You can swap Vietnamese cold cuts for more traditional protein like grilled pork or chicken.  You can even substitute soy.

The second descendant of French colonialism was the Mexican torta.  Yes, the French were in Mexico, too, where they not only invented Cinco De Mayo (actually as a consequence of losing the Battle of Puebla), but the French baguette from which Mexican bakers took inspiration and began making the bread which today serves as the canvas for the torta.  Though telera bread was developed in Puebla, it was Mexico City that really made the torta truly Mexican.  Denizens of the Districto Federal infused the Mexican culture into the sandwich, creating something unique and diverse.

Read the description of the banh mi above and much of that description applies to the Mexican torta as well. Stuffed with a combination of meats, vegetables and other condiments?  Check!   A melange of different textures and temperatures?  Got it! Off-the-chart flavor profile: salty, sour, savory, sweet, and aromatic all simultaneously?  You bet!   Can be enjoyed for breakfast, lunch, dinner, as a snack or all of the aforementioned?  Absolutely!  Did I also mention that both banh mi and tortas are value-priced?  Or that they’re both absolutely delicious?  Sandwich shops dedicated strictly to the banh mi are popping up across the fruited plain.  Similarly, tortas shops are finding their way to the hearts and appetites of people all over the country.

One of Albuquerque’s first eateries devoted exclusively to the Mexican sandwich is Don Tortas on Central just east of San Mateo.  Our visit inspired me to reflect on a tribute to the torta from award-winning writer Naomi Tomky.  In an article penned for Serious Eats, she confirmed  an opinion I’ve long held: “The taco and the torta are the twin pillars of Mexican street food, but where the taco is small and sexy and has long since seduced all of America in its many forms, the torta (with its many Mexican sandwich siblings) is just teetering on the brink of international stardom. The small size of a taco makes it an easy step into new flavors, but a sandwich is a meal, it’s a commitment to the milanesa, the carnitas, or the pierna (pork leg) inside.”  Bravo Naomi!

I would argue that tortas are sexy, too, and size does matter.  Laura Hahnfeld of Phoenix New Times agrees with me: “I’m convinced there’s not many things in life a well-made torta can’t cure. Bad day? Torta. Un-friended on Facebook? Torta. Walking around with a piece of torta in your teeth? Torta. Monster-size and cheap, these popular Mexican sandwiches — stuffed with meat, thick slices of ripe avocado, pickled jalapeños, lettuce, tomato, and mayo — deliver in size as well as flavor. And the soft, round telera bread is nothing short of heavenly.”

In Spanish-speaking countries, “Don” is often used as a title of respect when it precedes a man’s name.  Don Tortas earns that respect with an all-day-long menu of sumptuous sandwiches.  Open from 7AM – 9PM Sunday through Thursday and 7AM – 10PM Friday and Saturday, it’s an every day of the week option for all Earls (a name actually proposed for sandwich lovers).  The menu features four breakfast tortas (including a veggie option), six classic tortas and five super tortas.  Frankly, they should all be considered “super.”  All sandwiches are served with pinto beans, tomatoes, onions, avocado, mayonnaise and your choice of jalapeno peppers, Hatch green chile or chipotle sauce.

My Kim’s choice–from the classic tortas section of the menu–was the curiously named La Toxica.  Yes, among the synonyms for “toxica” are “harmful, detrimental, damaging, injurious, prejudicial and insalubrious.”  We didn’t ask why such an unsavory name could be given to such a savory sandwich.  La Toxica (grilled steak, smoked pork chop, melted cheese) is certainly worthy of a more complimentary name.  Maybe just call it number eleven, its number on the menu.  This is no humble sandwich; it’s a palate-pleasing work of art, a mélange of delicious ingredients working well together.  Sure the smoked pork chop was as thin as a supermodel, but that smoky flavor is large and goes a long way.  So does the grilled steak (carne asada), smaller than bite-sized pieces of perfectly grilled steak.  Then there are the condiments–more than the three to six condiments respondents to French’s survey indicated they like.  There’s nothing toxic about this sandwich, but its name.

If you think El Perron is named because this torta has canine qualities, let me give you a short Spanish lesson.  “Perron” actually means “kick ass”  or “cool” as in “this sandwich kicks ass.”  That’s especially true if you order it with the Hatch green chile.  El Perron (deli ham, Panela cheese, breaded steak, smoked pork chop, beef franks and melted cheese) is a titanic torta from the Super Tortas section of the menu.  As with La Toxica, it’s a compilation of complimentary ingredients that work together as well as the Dallas Cowboys passing attack.  Beef franks, a surprisingly popular ingredient on tortas (and even Mexican burgers) feels right at home with the smoked pork chop and breaded steak, both oozed over by melting cheese.  The bread was just formidable enough to maintain the integrity of the sandwich, but not so dense that it overwhelms other flavors.

Every so often something good does come from something bad.  Two of my favorite examples are the banh mi and the torta, extraordinary sandwiches that are transforming the Earl of Sandwich’s simple creation.