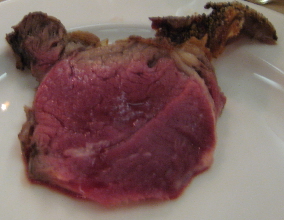 In Spanish, the word Eldorado translates to “the gilded one” or the “golden one” and refers to an imaginary place of great wealth and opportunity sought in South America by 16th-century explorers.

In Santa Fe, Eldorado means a stately landmark hotel just off the historic Plaza in which guests are graced by the art of hospitality in lavish accommodations. The heart of the hotel is the Eldorado Court, located just off the main lobby.

During our first visit in 2005, the Eldorado Court was “guarded” by two multi-hued, bigger than life coyotes (the type that helped define Santa Fe style years ago). Those coyotes have been repositioned onto ledges where they still remain in vigilant watch.

On Sundays, Eldorado Court hosts one of the very best brunches in Santa Fe, a sumptuous buffet that might have quelled the Spanish explorers’ lust for gold and supplanted it with a yearning for Sunday mornings.

A Bacchanalian feast of dining extravagance features bounteous spreads of thematically arranged tables showcasing such brunch delights as seafood, salads, fruits and cheeses, desserts and oh so much more. You’ll be tempted to camp out at any one of these culinary stations, but there’s so much you’ll miss out on if you do. For a sampling of as many of the Eldorado’s treasures as possible, smallish portions are advisable, but then, you’re bound to find at least two or three items you’ll want to load up on.

For me, one of those items were the toasted coconut macaroons, the best I’ve ever had. Soft on the inside and topped with a luscious layer of chocolate, they are literally melt-in-your-mouth delicious.

Alas, with rotating fare, the macaroons are not always featured, but fear not. The decadent dessert tables might include a terrifically tart key lime pie with a Graham cracker crust or churros, the sweet, fried snacks often referred to as Mexican doughnuts. Bread pudding with a vanilla sauce as well as several other temptations might also be available.

If you prefer fructose based sweets, a veritable orchard of fruits are available–from succulent pineapple to sweet, juicy melon. The fruits and cheeses provide contrasting flavor experiences with a mélange of sharp cheeses and fresh, sweet fruits.

While many Sunday brunch buffets offer steamship round or prime rib, they’re generally of buffet quality lacking in the requisite tenderness or juiciness for which prime rib is loved. Not so at the Eldorado Court where the prime rib is of expensive entree quality.

A generously thick slab of perfectly marbled prime rib is pink through and through with the exception of the edges which are encrusted and crispy the way really good prime rib is prepared. This prime rib is succulent in its juices and covers much of your plate. Alas, the accompanying horseradish is barely more mild than your standard sour cream. Amusingly, a wooden mountain lion stands guard over the carving station as if to prevent interlopers from stealing its bounty.

Carnivores might also find Pork Putanesca with roasted sweet corn on the cob offered on the meat tables. A tangy tomato sauce is applied on a thinly sliced pork with just a hint of fat to form this tasty creation. You might also be inclined to try the tender chicken fajitas and bathe them in the restaurant’s exceptional guacamole. In either case, load your plate up with the restaurant’s red curry seasoned roasted potatoes which are delicate cubes of slightly sweetened potato perfection.

The breakfast component of brunch is well executed as well with an action station in which omelets and waffles are skillfully prepared to your exacting standards. The omelet accoutrements include New Mexican standards such as green chile and Mexican cheese while waffles can be dressed up with strawberries and other fruits.

You can wash down your brunch with complementary coffee or with Sunrise orange juice (a Santa Fe favorite) which has a fresh squeezed taste. In either case, you’ll want to toast to what is one of the very best Sunday brunch offerings in the Land of Enchantment.

A twenty percent gratuity is automatically tacked on to your bill of fare, but with on-the-spot service by true professionals, you might still be inclined to tip. The Eldorado Court staff is gracious and accommodating.