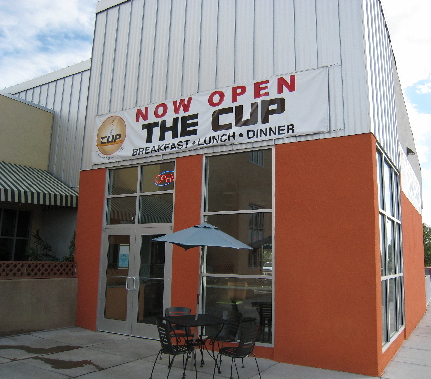 Buxom silent screen siren Mae West was so renown for her use of double entendre that she once said, “If I asked for a cup of coffee, someone would ask for the double meaning.”

When my wife suggested we have breakfast at The Cup, I wondered what she really had in mind. The Cup, after all, did not impress her in the least during our inaugural visit in January, 2007.

It was even worse for me as The Cup’s emptiness triggered memories of a dark day in the late 70s when I was the recipient of bad news (the “Dear John” kind) at the only restaurant I can remember as empty as The Cup that night–a long defunct Burger Chef.

Considering The Cup was sister restaurant to the popular Gold Street Caffe, the emptiness seemed like something out of the Twilight Zone.

We’re also talking the Pan American frontage road area within easy walking distance to the Century 24 theater. All the restaurants clustered in this area and their parking lots are typically nearly filled to capacity on Friday nights.

The feeling of unease and trepidation followed me as we walked up to The Cup and saw, scrawled on a sign “New Concept, New Menu, Old World Taste, Nothing Over $14.50.”

What the sign left out was “New Ownership.” The Cup is now owned by the quadrumvirate which operates Scalo, one of the Duke City’s best Italian restaurants. The group assumed ownership of The Cup in April, 2008.

Where changes are most evident is in the menu which introduces a revolutionary concept Albuquerque diners will hopefully embrace. The menu includes nine different tapas, an impressive selection of salads and sandwiches and several main course entrees.

The concept of tapas has been tried to varying success in several Albuquerque restaurants, but The Cup extends that concept with an imaginary fusion of small plates, appetizers and entrees with an Old World European flair and flavor.

The logo for the Cup’s new concept bears the flag of four European nations: France, England, Germany and Spain. The menu featured items from throughout Europe, many with a surprising twist.

Consider the Irish Reuben. Most of us are familiar with its components–pretty standard stuff. Restaurants “daring” to deviate from the time-tested, albeit mundane, standard may add pastrami to the mix. Big deal, right? At The Cup, the sandwich is called the Reuben Italiano and it’s crafted with lean corned beef, spicy Italian sausage, and caramelized onions on a crusty Italian bread topped with spicy marinara and melted Provolone cheese. It’s one of the restaurant’s best sellers.

The menu does a better job of cultural amalgamation than the United Nations. On the world stage, France and Germany have never gotten along as well as in the creations on The Cup’s menu. A lot of thought obviously went into the planning of the menu and the multi-nation melding isn’t always intuitively obvious.

The cultural cavalcade isn’t always as obvious as the aforementioned Reuben Italiano. The elemental composition of some entrees may be a favorite dish or ingredient from one nation ameliorated with a sauce, dressing or demi-glaze from another nation. The possibilities are fun.

The tapas menu starts off your Old World tour. Consider the Escalivada Catalana, a traditional Spanish tapa. The word “escalivada” comes from the Catalan verb “escalivar” which is the process of cooking food slowly and very close to the embers of a fire.

Even though The Cup’s rendition may not have been prepared over an open fire, its soul has its genesis in barbecue. The Cup’s Escalivada Catalana features roasted red peppers, eggplant and caramelized sweet onions finished with a Sherry dressing.

Normally this tapa is served on its own or with grilled meat, but at The Cup it’s served over grilled rustic bread in a manner similar to how bruschetta is used. It is a very tasty way to begin your European adventure.

A delicious French detour is an option with the bacon wrapped Roquefort Filet Mignon, a seven-ounce filet wrapped in bacon and char-grilled to your exacting specifications. The filet is served over red bliss mashed potatoes and finished with melted Roquefort cheese and red wine mushroom Bordelaise.

There is a lot going on with this dish. The pungency of the “King of Cheeses, Cheese of Kings” and the red wine mushroom Bordelaise ameliorate the flavor of the steak, a testament to the chef as Roquefort, in particular, can dominate just about anything.

The filet is tender and delicious, as good a cut of meat as can be had at the price ($14.50) anywhere. It will have you wishing the portion size was significantly larger than seven ounces.

The cold coastal waters of the North Atlantic meet Italy in the seafood risotto entree. I must confess that in my entire life, I’ve had outstanding risotto only twice and each case, at a princely price.

The Cup’s version of risotto is the best risotto I’ve ever had approximating its price point ($14.50). It’s better than some I’ve had at twice the price.

You might remember that risotto became a part of pop culture when a Seinfeld episode lampooned the post-coital ritual of lighting up a cigarette–only in this case George Costanza’s girlfriend lit up contentedly after a satisfying meal of risotto. The noisy ardor with which she consumed the risotto was something the ego-fragile George couldn’t elicit from her in the bedroom.

The Cup’s seafood risotto didn’t have me behaving like Costanza’s girlfriend, but it did impress me. Shrimp, scallops, mussels and calamari in a roasted shallot lobster risotto finished with Parmesan will do that.

The seafood was delicious and surprisingly fresh. The mussels and scallops were sweet, the shrimp had the snap of freshness and the calamari wasn’t rubbery as it’s apt to be when ill prepared.

An impressive array of desserts will finish your Old World adventures. Try the bread pudding topped with apricots and ice cream for a combination that will tantalize your taste buds. The bread pudding is dense and thick, the apricots tangy and semi-sweet and the ice cream rich and delicious.

Desserts are the specialty of Chef Stephan Maywalt, who was brought in from California to lead the kitchen team. He is a talented and personable chef who will make it big in Albuquerque.

The Cup offers a brunch menu Friday through Sunday, but the entire menu is available at all times. You can decide for yourself if it lives up to the motto on its bills: “5 star food, 2 star prices.”

As to why my Kim chose The Cup for our Sunday morning repast, she had actually learned of the ownership and concept change and wanted to surprise me as I tend to do her with many of our restaurant visits. It’s the type of one-up ploy Mae West would have enjoyed.