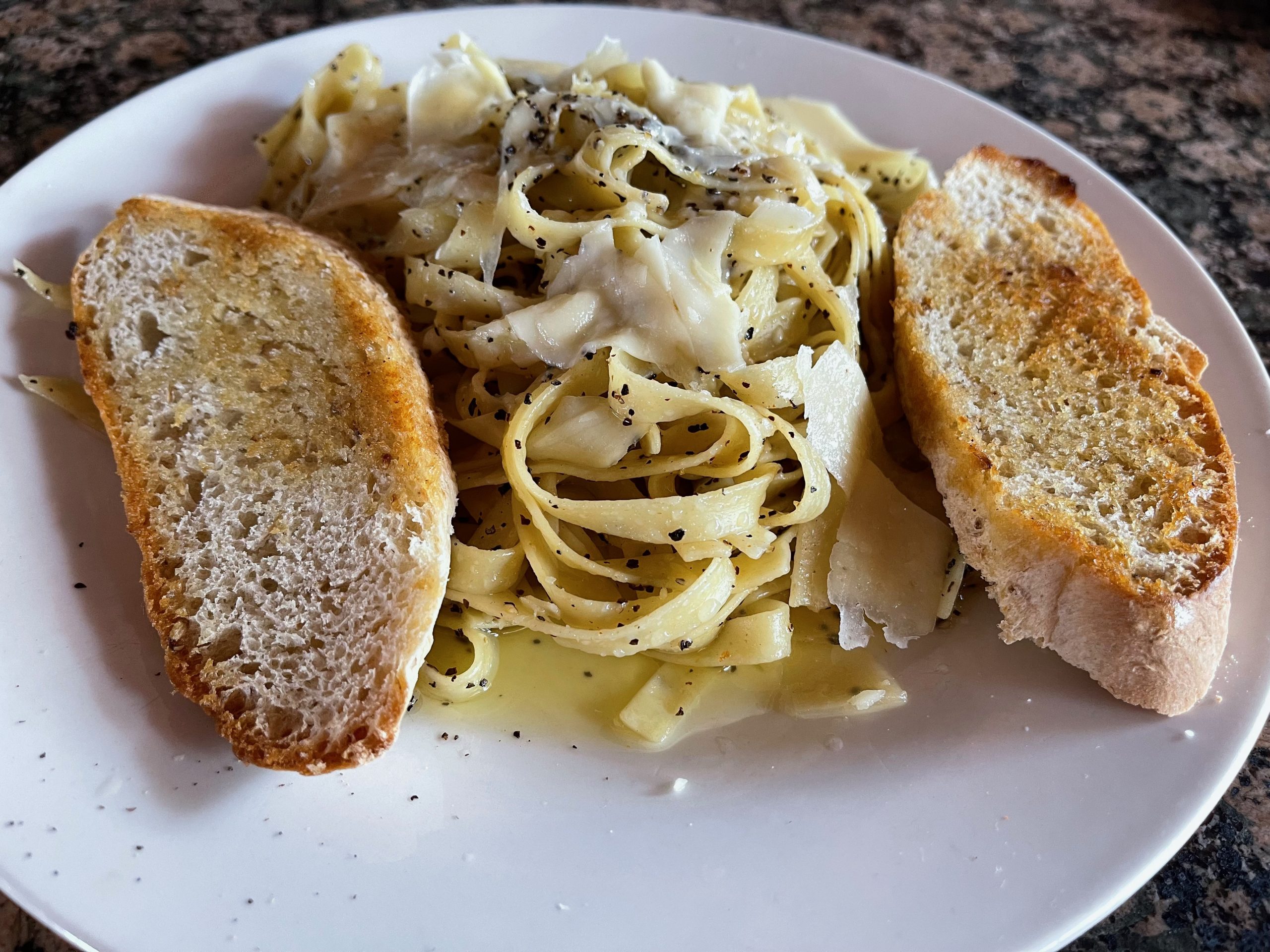 What is it about French words that make them sound haughty and pompous to some people and elegant and refined to others? Think I’m kidding? In Massachusetts, I knew a guy who for two years sported the nickname “Le Cochon” like a badge of honor before someone had the heart to tell him it meant “the pig.” He had thought that sobriquet was a testament to his prowess with the ladies (on second thought, maybe it was).

Still questioning my observations on French words? Take an informal poll of men (women are smarter) in the office and ask them what the word “bistro” means. I did and most respondents gave me some variation of “snobbish, hoity-toity, fancy, upscale” restaurant. In truth, a bistro is a small restaurant which typically features simple fare and sometimes provides entertainment. So, if you’re looking for a fancy, upscale French brewery when you see the name “Corrales Bistro” you’ll be in for a disappointment. If, however, you’re looking for terrific sandwiches, burgers, New Mexican food and more you’ll be pleasantly surprised.

The Corrales Bistro Brewery (“The Bistro” for short) opened shortly after New Years Day on 2007 at the former site of Essencia, a wonderful fine-dining establishment which closed in 2006. It’s the brainchild of entrepreneurial Fritz Allen, proprietor of another business, Hanselmann Pottery in the same commercial center as his brewery. If you’ve driven past the bistro, you may have noticed its new signage which no longer includes the term “Brewery.” The term has been a bit of a misnomer—at least in terms of volume–for a while. Until 2013, Corrales did not have a village sewage system and all wastewater was dispatched into septic systems. That limitation made it a challenge to brew beer in the volumes other metropolitan area breweries do.

Before he launched his bistro-brewery, Fritz had to request a change in Corrales zoning laws to clear the path for his undertaking. An amendment to a village commercial zoning ordinance allowed him to brew no more than 5,000 barrels of beer a year. While the Bistro has a small selection of its own beers, its focus has also been on serving beer from great breweries across the Land of Enchantment. Habitues of the Bistro who appreciate New Mexico brewed beers are well advised to join the “Mug Club” where a membership fee entitles them to enjoy a 22-ounce mug of fine ale for a pittance.

One factor which distinguishes The Bistro from other taproom-restaurants is its sense of community. The Bistro is akin to the “Cheers” of Corrales. Everyone knows your name here. To a large extent, my friend Larry McGoldrick, the professor with the perspicacious palate, credits his decision to move to Corrales on the neighborliness of The Bistro and the “Corralenos” who frequent it. During a visit in July, 2017, we watched as Fritz greeted most of his guests by first name and often with a hearty embrace. The Bistro truly is a hometown hang-out—even if you’re not from Corrales.

Our favorite dining area at The Bistro is an expansive dog-friendly patio. Seasonally-permitting, it’s a terrific venue for enjoying the salubrious Corrales air, punctuated only by the aromas wafting from the kitchen. The Bistro is open seven days a week for lunch and dinner. In keeping with its sense of community and local pride, The Bistro has become quite the platform for local musicians to showcase their talents. Almost every day of the year, talented musicians entertain patrons with such popular musical stylings as jazz, Celtic, bluegrass and folk.

Just as The Bistro’s menu—a fusion of cultures and ideas–can’t be pigeonholed into one category, The Bistro has two mission statement-defining mottos: “if you are not crossing a cultural boundary, you can try harder” and “make yourself at home.” The Bistro does indeed showcase a multi-cultural menu and you certainly will feel right at home. Breakfast is primarily New Mexican entrees—all the dishes we know intimately and love greatly. For lunch and dinner, featured fare includes a nice selection of salads, sandwiches, wraps and specialty burgers, some of which may make you wish your home was in closer proximity.

19 July 2017: Regardless of what you order, you’ll want to start your meal with The Bistro’s fabulous chips and salsa (some of the very best in the state). The salsa is made with an autumn-blend chile flecked with roasted red (more like orange) chile. Roasted red chile has a sweeter flavor than roasted green chile, a sweetness we mistakenly attributed to finely diced carrots. The melding of piquancy and sweetness is a pleasant surprise. Another is the generous portion of this terrific starter. Blue- and yellow-corn chips are thick enough to support the weight of any Gil-sized scoop of salsa.

20 June 2021:  According to Psychology Today, a group of Czech biologists embarked on an experiment that seems to suggest garlic consumption positively influences body odor. Darn, there goes my argument to my Kim that too much garlic repulses people.  You’d think she was trying to ward off a village of vampires the way she enjoys garlic.  When she saw the roasted garlic and feta bread dippers (feta cheese, roasted garlic cloves, olive tapenade, Balsamic dipping sauce and toasted bread) on the menu, she just had to have it.  She enjoyed the garlic while her devoted husband devoured all the feta cheese (which thankfully does not affect body odor or breath).

19 July 2017: Fire-roasted salsa and sour cream come standard with the Corrales Blue Quesadilla appetizer. This is one of the very best quesadillas in the metropolitan area, easily on par with the quesadilla at The Range. What makes this quesadilla special is that it’s crafted with two complementary cheeses, an ultra-sharp bleu (not blue) cheese and a mild Cheddar. It also includes New Mexico green chile, tomato, onion and Mexican herbs all grilled on flour tortillas. This quesadilla is roughly the size of half a pizza and could easily be served as an entrée.

11 August 2007: The Specialty Burger section of the menu includes an impressive array of creative burgers all starting off with a half-pound of beef (or you can substitute a grilled chicken breast). Basic toppings are lettuce, tomato and onion. Your creativity will dictate what else goes on. For a New Mexico inspired departure from the traditional burger on the bun concept, try the New Mexico Tortilla Burger, a half-pound of beef wrapped in a tortilla with chopped lettuce, chile con queso and fire-roasted salsa. It’s an outstanding burger grilled to your exacting specifications. At medium done its pinkish insides are dripping with flavor. All burgers are served with a salad or The Bistro’s special blend of sweet and white potato fries.

11 August 2007: There are ten sandwiches on the menu, some of which would challenge a competitive eater to finish. Take for example, the Ruben, a grilled triple-decker sandwich skyscraper high with corned beef, turkey, Swiss cheese, mild sauerkraut on lightly grilled rustic rye bread. Russian dressing may be in there somewhere, too, but it’s lightly applied to give the meat the opportunity to shine. Shine it does. This is one of the best Ruben sandwiches in the Duke City area. A propeller-headed mathematician friend of mine with a penchant for French words said it was “an ordre de magnitude” better than others he’s had in town.

Faithful readers of this blog have probably been subjected ad-nauseam to reading about my passion for pastrami, a passion shared only by Meg Ryan in the movie “When Harry Met Sally” when she gave Katz Deli diners an impassioned appreciation for this mildly smoked paragon of deliciousness. Alas, with few exceptions (foremost among them California Pastrami and Toro Burger) pastrami in the Albuquerque area tends to evoke one reaction–disappointment. Still my pursuit for pastrami perfection goes on.

24 April 2019: At The Bistro, pastrami is showcased in a uniquely named sandwich called El Pancho Greenblatt (pastrami, green chile and Cheddar cheese in a tortilla. My last experience with this sandwich is over a decade ago, but the Alibi’s Hosho McCreesh enjoyed one and had this to say about it: “The grilled tortilla wraps in all the hot, salty goodness of the pastrami and the luscious melted cheddar, and again the green chile brings the spicy heat that’s hard to beat. It’s a got a great name, a simple, straight-forward style, and comes with fries or a side salad. And while I’d love a dollop of a grainy, stone-ground mustard on the side, I’d certainly have this one again however they’d give it to me.”

My friend Bill Resnik will tell you The Bistro’s sandwiches are made the way you might make a sandwich for yourself. You wouldn’t scrimp on ingredients and neither does The Bistro. You wouldn’t haphazardly toss tomatoes and lettuce on your sandwich; you’d position them carefully so they complement your sandwich. That’s the way The Bistro makes them. These are excellent sandwiches! Moreover, one waitress told us everything on the menu is made with an extra ingredient–love. How can you possibly go wrong?

20 June 2021: Menu surprises galore greeted us during our first visit in four years.  In addition to the burgers, sandwiches, appetizers and New Mexican entrees with which we had fallen in love, we found a number of enticing chef’s choice salads, wraps, chef’s choice entrees, flat breads and al dente pasta del giorno.  Among the latter is cacio e pepe (sautéed pasta with olive oil, Parmesan and fresh pepper), a dish which translates literally to “cheese and pepper,” or as described by some sources as a “minimalist mac and cheese.”  The cracked pepper lends a pleasant assertiveness while the Parmesan adds a nutty tang. More like spaghetti without marinara than like a minimalist mac and cheese, it’s a delicious dish no matter how you describe it.

20 June 2021: Somehow Jambalaya (ham, bacon, chicken and sausage with blackening seasonings in a rich dark roux) made its way onto the al dente pasta al giorno menu.  Why argue that it doesn’t belong there when you can be enjoying an assertively seasoned dish.  The Bistro’s Jambalaya isn’t quite as moist as most Jambalaya we’ve had.  In fact, it has a texture more similar to Spanish rice  (albeit with blackening seasonings) than to one of the quintessential Cajun dishes.  (Longtime readers will recognize my antipathy toward Spanish rice.)  Sans shrimp or crawfish, it’s not New Orleans worthy, but it’s not horrible.

Okay, if you’re still inclined to believe French words show refinement and class, I’ve got one that describes the sandwiches at the Corrales Bistro Brewery–magnifique!