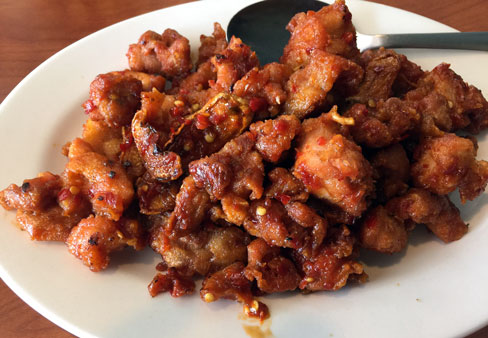 And I find chopsticks frankly distressing.
Am I alone in thinking it odd that a people
ingenious enough to invent paper, gunpowder,
kites and any number of other useful objects,
and who have a noble history extending back
3,000 years haven’t yet worked out that a pair
of knitting needles is no way to capture food?
~Bill Bryson

The precise date in which chopsticks were first used has been lost in time. Archaeological evidence found in burial plots indicates they are at least 3,200 years old though some scholars believe they’ve been around even longer than that. Even the evolution of chopsticks is in debate. Some surmise that chopsticks evolved from the practice of using wooden sticks to stir food as it cooked on large pots over an open fire. Others believe that hasty eaters broke twigs from trees to retrieve food as it cooked. Whenever their origin and whatever its genesis, chopsticks have, for thousands of years, been the main tableware of the Chinese. By the Fifth Century A.D., the use of chopsticks had even spread from China to present day Japan, Korea and Vietnam.

The dualistic philosophies of Yin Yang that seek universal balance and harmony even posit a correct way to use chopsticks so that the user forges a correct ration of sauce to meat. Their fundamental use remains unchanged over time. While many Americans have mastered the etiquette and techniques for using chopsticks properly, in the hands of others (including me), chopsticks become a lethal weapon, the attempted use of which might result in someone’s eye being gouged out.

Ironically, the only chopsticks you’ll see when you walk into Chopstix Chinese Cuisine are in the hands of deft users. On unoccupied tables, the place settings are spoons, forks, knives and a napkin. What makes this doubly ironic is that Chopstix, despite the Westernization of the name, is, along with the fabulous Budai Gourmet Chinese Restaurant, the most authentically Chinese restaurant we’ve found in Albuquerque. How authentic? For the unacculturated, it’s scary authentic with such rare specialties as chicken feet and pickled kohlrabi with pork and chive (both are delicious).

From its launch in 2005 until my inaugural visit, I received more e-mail about Chopstix than any other restaurant not previously reviewed on my blog. None of the e-mail was more passionate or compelling than one from Tom Donelan who described Chopstix as having “really excellent food with amazing and not familiar flavors.” Tom should know, having sampled 50 to 60 menu items. While it’s not unusual for Chinese restaurants to have more than a hundred items on the menu, what is unusual for many diners is to sample so many of them. Most diners seem to settle on a handful of select favorites.

Chopstix is ensconced in a nondescript shopping center on the northwest corner of Lomas and San Pedro. It occupies the space which once held Taeja, a highly regarded and widely popular Korean restaurant which closed in 2004. On its signage, the “x” at the end of the name Chopstix resembles a pair of chopsticks. The bottom end of the chopsticks (the end used for picking up food) is tapered to a blunt end. That, we quickly found out, is where the “Westernization” ends.

The menu at Chopstix is very similar to what you might find in the Chinatown district of a large Cosmopolitan city such as San Francisco or my former hometown of Boston. Every item on the menu is spelled out in English and in Chinese and is accompanied by a photograph. A plethora of healthful options, including several vegetarian dishes makes this menu unique in that it doesn’t specialize in the deep-fried, heavily breaded, candied meat favorites proffered elsewhere. The menu does include several of the “usual suspects” (Kung Pao Chicken, Sweet and Sour Chicken, Orange Beef), but the Chopstix’ version is better and not nearly as Westernized.

Additional dishes (specials) are posted in plastic sleeves on the east-facing wall. Many of these dishes are not to be found anywhere else in Albuquerque and rotate in and out seasonally and as customers request. To my surprise, there were several menu items I hadn’t seen since my days in Boston. The cuisine is Beijing-style which focuses on poultry and vegetables and relies heavily on spices (though not as extensively as Szechwan style cooking) and breads. This style of cuisine is surprisingly not that common, even in Cosmopolitan cities throughout America.

Most of the dishes are truly authentic, prepared as they would be in Beijing itself, without modification for American tastes. These dishes are prepared from scratch and take meticulous preparation time before they reach your table. When the restaurant is busy, it can mean long waits. While that may tax the patience of some Americans, many of Chopstix’ customers are Chinese who don’t seem to mind the wait. It’s certainly worth it.

The appetizer section of the menu lists twelve appetizers including the ubiquitous egg rolls. Appetizers also include sesame shaobing, a layered baked flatbread with sesame on top. In texture, shaobing bears some semblance to naan, the wonderful Indian flatbread. It’s crispy on the outside and soft on the inside. Unlike naan, however, shaobing is virtually devoid of flavor, not even salt. In Taiwan, it’s served for breakfast with soy milk, a combination considered the most iconic breakfast in Taiwan.

The shaobing is accompanied by a standard “pot sticker sauce” (soy sauce, ginger and rice wine vinegar) for dipping, but savvy diners order the shaobing with their meals instead of as an appetizer. Dredging up the sauce on some of the entrees with shaobing is an improved use of a very tasty, very utilitarian bread that you just don’t find in many Albuquerque Chinese restaurants.

20 May 2012: Though New Mexico doesn’t currently have a full-fledged Chinese bakery, a surprisingly wide variety of Chinese bakery goods can be found in Chinese restaurants throughout Albuquerque (the dim sum menu at Ming Dynasty, for example, offers several). Only at Chopstix will you find Chinese fried bread, a deep-fried cruller that’s a Hostess cupcake shade of gold served with sweetened condensed milk which has a “frosting” like effect on the bread. It’s akin to having a Chinese donut. Only a scalding cup of coffee could possibly improve on this Chinese fried bread.

4 August 2007: Another appetizer unique in Albuquerque to Chopstix is Szechwan Sausage. While Szechwan cooking is characterized by spicy and piquant food, the Sausage barely registers on the piquant scale, but is redolent with spices (ginger, star anise, dried red chili and wild pepper), making it a very flavorful appetizer. Szechwan sausage is made from shredded fresh pork, both lean and fat meat cuts. You’ll occasionally bite into a sinewy bit, but for the most part, the texture of the sausage is akin to that of many German dry sausages.

17 March 2007: There’s a lot of truth in labeling when an asterisk (*) prefaces a dish. That means the dish is hot and spicy. Even the hot and sour soup (one of three soups on the menu) is gunpowder incendiary. It’s also as delicious and comforting as any hot and sour soup we’ve had, with throat and stomach warming properties that move it near the top of my favorite soup list. There are plenty of woody mushrooms on this soup, a sign of its authenticity.

17 March 2007: Near the very top of my list of outstanding garlic shrimp entrees I’ve ever had is the Chopstix version. Laden with minced garlic and populated with barbed hot peppers, it is intensively flavored and preternaturally delicious. Prepared to absolute perfection were the dish’s vegetables: sweet snow peas, julienne carrots, green peppers, white onions and more. The sauce is incredibly flavorful, a perfect accompaniment to the aforementioned shaobing.

17 March 2007: Chinese physicians tout the healthful properties of mustard seed (which contain lots of protective substances called phytochemicals, which may inhibit the growth of existing cancer cells and help prevent normal cells from turning into cancerous ones), while diners will tout the surprising deliciousness of mustard with dried bean curd. Somewhat resembling, in both taste and appearance, the mustard greens so popular in Southern cooking, this dish doesn’t have the intense flavoring of the garlic shrimp, but it may be the most surprisingly good version of “greens” I’ve ever had.

20 May 2012: If the Chinese dish of mustard with dried bean curd resembles the mustard greens of the Deep South, Chopstix’ rendition of Seafood Noodles has only a passing resemblance to the Caldo de Siete Mares served in many Mexican mariscos restaurants. It more closely resembles a Vietnamese pho with a rich broth redolent with the flavors of the bounty of the sea–shrimp, crab, squid and fish. The baby bak choy lends a slightly bitter flavor profile while the thick rice noodles provide one of life’s best pleasures, that of slurping perfectly prepared, almost buttery noodles.

4 August 2007: Pork entrees include Vinegar and Sugar Ribs in which pork ribs are stewed with soy sauce, Chinese vinegar, various seasonings and what is likely brown sugar. Not everyone appreciates a sweet and savory combination, and even if you do, this may be too much of a good thing–as in not enough taste contrasts for you to continue enjoying it with the same gusto as you had when gnawing the meat off the first few bones.

20 May 2012: In recent years, perhaps as an offshoot of bacon’s popularity, one of America’s favorite gourmet cravings has been for pork belly. The Chinese version is called Dong Bo Pork and it’s fabulous. On the bowl in which it’s served, it bears an almost off-putting resemblance to fatty pork served in ink or tar. The sauce in which it is served is a Hoisin-soy sauce mix that’s wholly unnecessary, but quite good. This half-lean meat and half-fat pork belly dish is a wonderful study in textural contrasts, but if you like pork regardless of texture, it’s a dish you’ll love.

2 October 2015: Little chili icons next to specific items on the menu denote levels of spiciness. Several items are rated one chili, but only one item has two chili icons next to it. That’s the chicken with ginger, a unique dish unlike any we’ve had in Albuquerque. Lightly breaded chicken usually means tender and moist, but not on this dish. Texturally the chicken is chewy and crisp with not as much moistness as you might expect. Piquancy is courtesy of finely chopped bird peppers as well as stir-fried ginger strips. It’s not the type of piquancy which should intimidate most New Mexicans, but it’ll make most of us happy.

Several entrees are accompanied by steamed white rice, but for a pittance you can also have fried rice, with or without pork. Chopstix’ version of fried rice isn’t as soy sauce salty as most fried rice you’ll find in Americanized Chinese restaurants. It lets other flavors speak out for themselves.

You should never visit Chopstix alone because while every item might be good, you miss out on the fun and adventure of sharing and even a good thing (like the Vinegar and Sugar Ribs) might be too much of a good thing. There is much to like and much to be explored at Chopstix, a restaurant which may have a Westernized spelling, but which serves some of the best, most authentic dishes of any Chinese restaurant in New Mexico. This one will remain highly placed on my rating list!